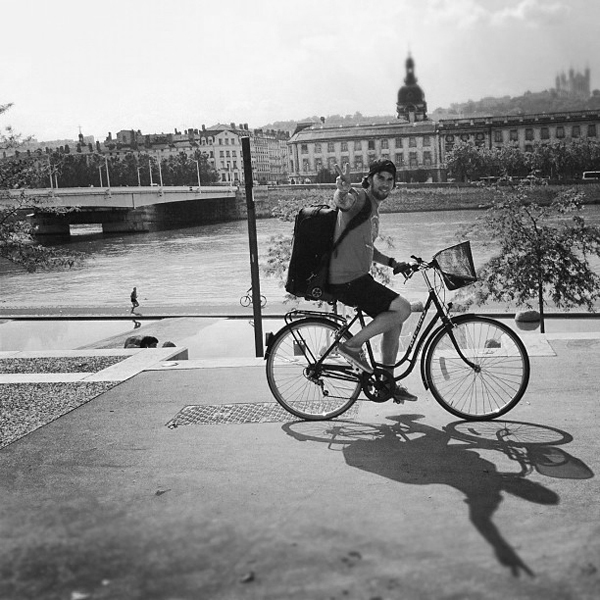 I met Vincent Perraud for the first time at Mark Potoczny’s trails in the middle of no where Pennsylvania at the last Welcome Jam. I had seen some of his work prior to meeting him, so I was really stoked to cross paths with him and talk for a while. That was about two years ago now. Since then, Vincent’s photos have progressed and continue to get better and better. His name has appeared pretty regularly in all the bigger magazines and through covers, features and print ads. There’s also been a ton of photos that end up being used online as well. The other week, I saw one of the best cover photos ever that Vincent shot. I started thinking it had been too long since we caught up. We decided it would be a good time to drop an interview with him along with a fresh photogallery that is a must see! Check out the full interview below and check out the photogallery right here. Don’t forget to leave Vince some love in the comments too!

Years riding: 13? but I haven’t rode for the last 2 years… I just rebuilt a bike 2 weeks ago and I’m trying to ride some concrete…

Years shooting photos: 8 or something since I got my first camera and maybe 3 or 4 shooting professionally.

What was it that first got you into BMX? Any early memories come to mind?
I remember I was always pedaling around when I was kid. I’d ride this jump into the woods with random bike. One day I got a Sunn (french company) catalogue with some photos shot by Olivier Weidmann… I was like “Wowwww, I want to do this”. So I got a proper bike and build some real jumps… That was the real moment I realized BMX existed.

What about photography? Was it because of BMX or something else?
Hmmm, I think I started doing photography because I tore my ACL and I was lookin for something to do. It was an excuse to stay with my friends… It took one year to recover, so it was a long time. The thing is that I was studying Design so I was into culture of image too… I’ve always liked it.

First camera: I remember it was a Canon 50 or something. I’m glad I start by shooting with film! 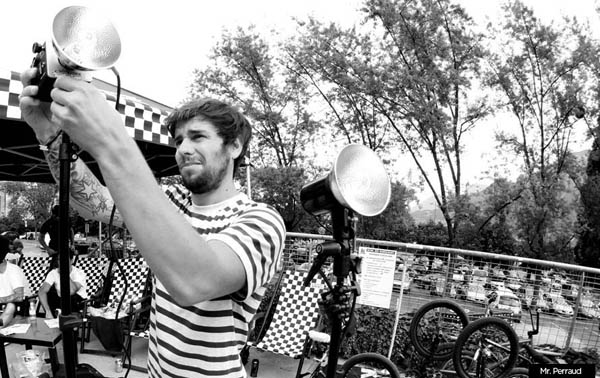 Do you have a dream setup at all or are you pretty content with you current setup?
Hmm, I would like to get a good digi with 1/1000 synchro X and tons of megapixels, and get some powerful and reliable flashs with really, really fast flash duration. I think I hate my current set up, haha, butm it’s alright and does the job.

I’ve been seeing your name popping up everywhere from that amazing Soul cover to a handful of print ads and features in different magazines and websites. Approximately how many photos have you shot in the last 6 months?
Heuuuu honestly, I have no idea… Probably too many digi and not enough film shots. It’s too expensive…

I know you’re constantly traveling. I think the last time we really talked, you mentioned that you were “homeless” just because you don’t spend much time in one place. Where are some of the places you have had the chance to travel the last year or two?
Aha thanks!! Yeah, that’s crazy but I have to pay the bills, so I have to go on trips! Now days I try to shoot less but more quality, like with the medium format. It’s so expensive so I have to make sure everything is fine… I’m really lucky though and yeahm just this year I had the chance to travel a lot like California, Arizona, NYC, Barcelona, Scotland, London, Ténérife and everywhere in France. I try to spend more time at home with the lady. It’s not easy… 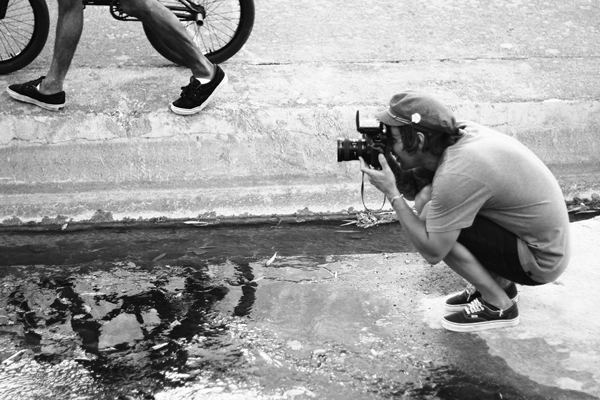 If you had to pick a favorite trip you went on, which one would you pick and why?
All trips are amazing espacially with friends/or amazing rider. I can’t pick one honestly, I’d like to spend a month in Cali with BSD, or make a trip from Austin to LA with Matthias Dandois and other friends… so much fun!

Based on the photo gallery to go with this, it’s pretty clear that you have had the chance to shoot with all kinds of riders from Ruben Alcantara down to the guys who are just making a name for their selves like Joey Motta. Who are some of your personal favorite riders you have had the chance to work with since you started shooting?
Yeah, I feel so lucky to shoot with so many different riders (and I’m on a Fly Bikes trip at the moment with Kalkoff, Ruben, Lantschner, Roey..) It’s always intersting to meet new people. I would like to say shooting with a stylish rider is what I like… I would prefer shoot table top for the rest of my life instead of triple tailwhip, you know what I mean? You can imagine the kind of guys I like to shoot. If I had to name a few? Dandois, Kalkoff, Valentino, Bonfil, Lille, Charveron, Jem’s, Guigui from hoppy, Garcia, Coulomb to name a couple from France (sorry to all the other friends I forgot…) then Ruben, Burns, Slattery, Layos, Lantschner, Grant, Malouf, Priesty, Lacey, Hoffman, Doyle, Kyle, Roey, Clint Reynolds, Illingworth… That list could go on …

Who are some of the riders you haven’t had the chance to work with, but would really like to at some point?
I don’t know. Maybe Mike Aitken? He is still my favourite rider. Maybe Mastroni or Garrett Reeves as of recently… So many good riders everywhere!!

Like we mentioned earlier, you travel all the time. What do you have lined up for the rest of the year? Any places you haven’t been but really want to go?
Yeah, Like I just mentioned, I’m on Fly trip t the moment at Kevin Kalkoff’s place. We’ll being going to Switzerland too. Next week I’ll go to bask country with the 4Down/ Fit U.K guys. I’m sure it will be really funny and after that I don’t know really… All projects always come up all the sudden on short notice.. I just cross my fingers to get something. 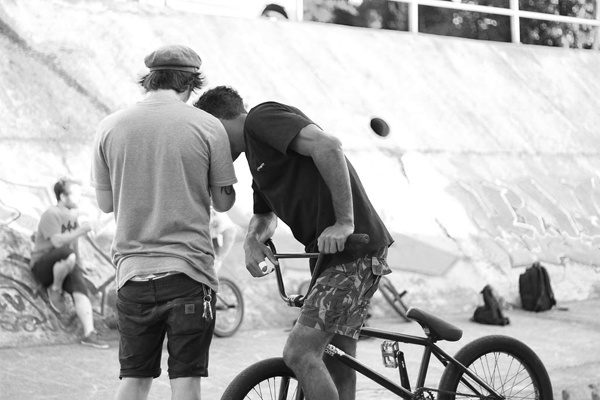 What are some of the projects you are currently working on? Anything you are really excited about?
Just trying to contribut to all the good magazines (Soul, Ride UK, Dig, Freedom, Albion, Ride US). It’s always a challenge… I try to keep all of this going and plan some stuff with them. Recently, I shot motorcycles with Dimitri Coste (famous french photographer and Vans Advocate). I’m just working on it to get something printed somewhere. I’m really into print…

This will be a tough one. You get a big budget to take 5 riders anywhere in the world for a week to shoot photos. Who do you bring, where do you go and why?
Wow hard choice!! Maybe I would like to do the same as T1 did a few years ago with a world tour and break the week rule, haha. For the riders, I couldn’t pick only 5. Maybe with guys like Slattery, Burns, Clint Reynolds, Ruben, or the full BSD team!!

Did you ever expect to be where you are today when you first started shooting? Looking back, would you have done anything different to get where you are now?
Haha, no way!! I never expected something. I still think I need to progress more… every day! I’m really happy at the moment. Yeah, maybe I would like to change couple of details but I have so many good memries thanks to BMX.

What do you think you would be up to if you never got into BMX or photography?
Wow. I have no idea. Maybe something with graphics or design because I studied those when I was at school. It would be something fun and creative?

Who are some of the photographers that influence you the most (BMX or Non-BMX)?
This list could be really long. Everybody and everything can influence you, even if it’s good or bad. I can name some people I really like to see work from… In BMX: Dolecki, Zielinski, Hadrien Picard of course (even if he’s more into filming now), Ricky Adam, Jeff Allen, Walter, Marshall or Bancroft… Non BMX: Dimitri Costes, Eric Antoine, Fred Mortagne, Bertrand Trichet, Scott Pommier, Brian Gabermann and Attiba.

I know you’ve got yourself a pretty impressive list of happy clients. Who are some of the brands you have had the opportunity to work for over the years?
Yes! I’m pretty lucky once again! First of all, the magazines I said before like Soul, Ride UK, Dig, Freedom, Albion, Ride US and BMX Rider (new german mag!). I’ve also worked with Vans, BSD, Carhartt, Redbull, Monster, Etnies, Fly Bikes, Odyssey, Nike, The Source BMX shop, Mongoose, 4Down, Wethepeople, Cinema, Superstar, etc. There’s not many French brands as you can see…

Do you shoot much outside of BMX these days? Do you get into weddings or anything like that? What’s the weirdest thing you have been asked to shoot?
Even if I’m really busy with BMX I try sometimes to shoot different stuff like motorcycles or bands… Stuff that I like mainly… I never shoot weddings because I never get oportunity and maybe because it’s not my style at all. I don’t know… I never get weird stuff I think? Maybe for some people it’s weird to cross a country to shoot some small bikes riding on a roundabout or a wall, haha.

What kind of advice do you have for the people looking to get into photography? What about making a career out of photography?
Don’t use your iPhone too much and try to shoot film to really understand how it all works. Be passionate and motivated… I still need some help to make a career as photographer. I’m not good at business.

Where do you see yourself in 5 years?
I have no ideas. I’ll hopefully still be alive and healthy… and happy. 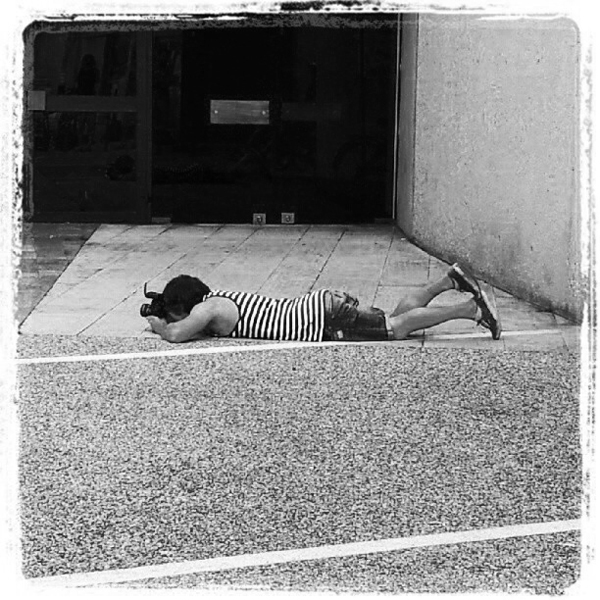 How can people keep up with you? Do you have a portfolio website, Twitter, Facebook page or anything?
Yeah, I have this. I don’t know if i’m into it… but it’s all about promoting unfortunately now days. I have this Vincent-Perraud.com and VincentPerraud.tumblr.com.

Do you have any shout outs or thanks?
Yeah, I’ve got a lot!! First to you, Kurt, for this intrview. I’d like to thank my parents, my girlfriend, friends, all of the riders who are up to shoot with me, all the magazines and companies who use my photos and allow me to make a living… cheers everybody!

Is there anything I missed you would like to say?
Let’s party??

Now make your way to the PHOTOGALLERY with 20 photos featuring some of your favorite pros like Ruben Alcantara, Kriss Kyle, Tony Malouf, Kevin Kalkoff, Matthias Dandois and more!

You are here: Home / Interview / Photos: Vincent Perraud
Note: This site contains affiliate links and we could receive a small commission that supports this site if you were to make a purchase on their websites using our links for no extra charge to you.