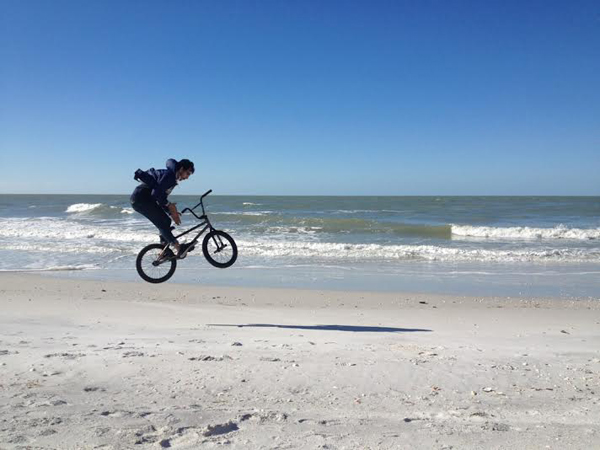 What can I say about Albert that you probably don’t know already? I don’t really know, but I do know that he’s one of the nicest guys you will ever meet and he’s always producing something amazing with his riding. At the start of the year he got the VERY WELL DESERVED bump up to the Kink and Shadow Conspiracy Pro teams after putting in years of hard work that earned him the spots! We figured with Albert joining the pro ranks and coming off a thumb injury that it would be a good time to catch up and find out what’s new with one of our favorite San Dieagons! Check it! 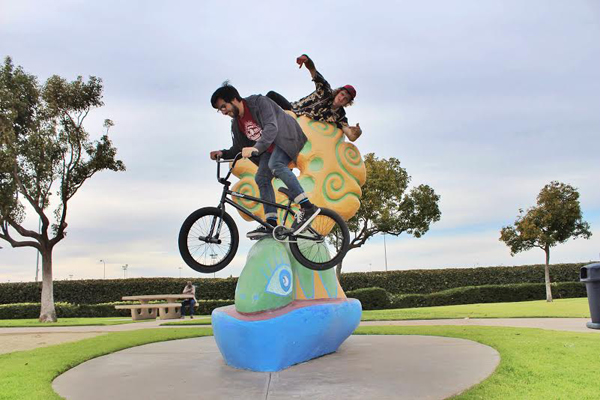 Yooooo, Albert! How’s it going? I heard you broke your thumb a little while back! How did you do that?
Aye Kurt! It’s going well bud. It’s been a hot minute. Just hanging out here in SD. I did break my thumb recently unfortunately. It sorted itself out pretty quick though and I was back riding in no time. Definitely still a little sore but it’s doing great now.

How long were you out for then? Did you have to get surgery or anything messy like that?
I was out for a little under 6 weeks. Luckily, the doctor said if I could stay off my bike for at least 5-6 weeks I wouldn’t have to pin it. Psyched I didn’t need anything gnarly to get it running again. 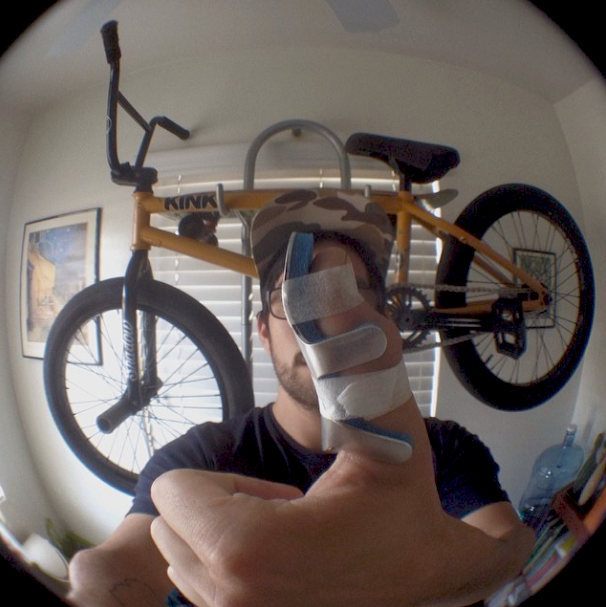 Other than the thumb, it sounds like 2014 has been a pretty kickass year for you so far. How psyched are you to get the well deserved bump up to the Kink and Shadow Conspiracy teams after doing the flow thing for a few years?
I’m not going to lie. It’s awesome. 2014 has been pretty rad. I am really hyped on the whole situation. Getting to travel more with all my good friends at Kink and SHDW so far has been a blast.

How did you find out you were getting the bump up from these guys? Did you know it was coming or did they dump it on you?
Both brands kind of just surprised me with it. Jay over at Kink surprised me at last year’s Texas Toast with the news and that was awesome. We kind of kept in on the DL until the New Year came around. Chadwick and Ronnie B over at SHDW surprised me during this year’s SHDW team meeting. Sneaky guys.

How’s things going with Kink so far? Are you cooking up any trips or projects with them for once you can give a high five without a cast?
Kink is amazing. Kink is the kind of company that fully has your back. Not one day has gone by since I’ve been on the team where they didn’t make me feel like family. 2014 has just accelerated that feeling and has opened the door for so much more. Lots of trips coming and a couple web video projects coming real soon. That’s for sure.

What about The Shadow Conspiracy? I’d imagine they will be getting you on a few trips and what not this year as well?
Same thing going on over at Shadow. Since I was part of the team they have always treated me with so much respect and there has always been a sense of family and comfort with them. We have a few trips coming up. We are currently working on a DVD, more news on that will surface this year. I’m siked to a part of the madness. 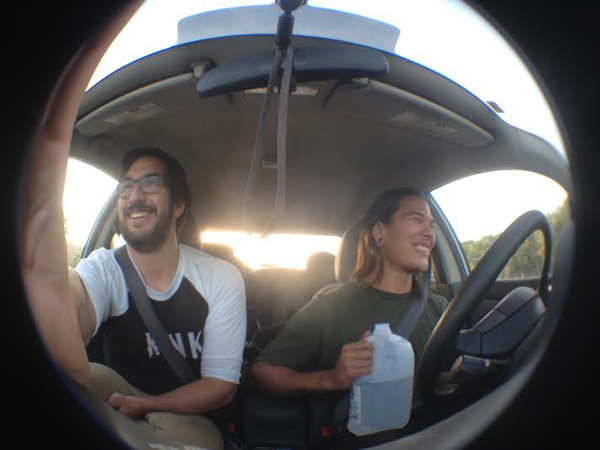 Word on the street is you just got yourself a passport? How the hell have you gone this long without one?
I don’t know, man, Haha. I basically blew it for a few years. We’re all good to go now!

How far have you gotten on your part for the SHDW DVD? Any idea when that will be out? Any hints at who has been killing it for the video so far?
I think I’m doing pretty well on my section. I’m my own worst critic though. I’ve been working hard on it. Not sure on dates just yet, but however long it is… It will be worth it. As far as whos killing it? Uhhhhh EVERYONE!

Aren’t you working on another video part as well? What’s the story behind the “Likewise” DVD?
The Likewise DVD! This is going to be great. Full DVD from our man Doeby. Doeby has been filming the SD dudes and just about anyone that is down to hang out and make stuff for awhile now. Towards the end of last year he decided he wanted to start filming his own DVD. The name Likewise came about and the crew has been killing it. The crew is: Kyle Hart, Hoang Tran, Gary Young, Dirt Ron, Myself, Mariano Santiago, Jack Acosta, Tom Perry and Demarcus Paul. We are taking our first trip for the DVD this summer. 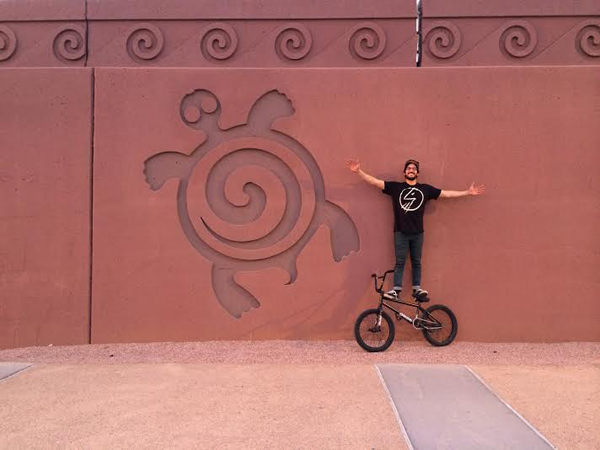 Other than the video parts, are you cooking up any other videos for us? I always get so psyched when something new from you surfaces.
Thanks man! That means a lot. I got something in the works. That thumb injury got in the way but I’m back at it. Sooooooon.

How are things going with Woodman clothing? Can you tell us a little bit about what they’re about?
Woodman is awesome. They’re a local SD brand. They just launched the brand on 12/12/2012. Tackling not just BMX but Skate and lifestyle clothing as well. So far they have been doing tons of good stuff and don’t show any signs of slowing down. They have a pretty awesome grasp on what looks good and what’s comfortable. If you get a chance check them out at www.wdmnco.com and the Woodman insta. @wdmco

It always blew my mind that you were working full-time and still killing it. Are you still doing the working thing or have you had the chance to step back a bit thanks to those fresh pro cards?
Those cards have helped a ton! And yes they have allowed me to take a step back and ride way more. Over the years of working and riding I’ve been able to manage my time really well. It’s been a task being busy all the time and I am looking forward to riding bikes a lot this year and taking a step back from working every day.

What’s the last song you heard and movie you watched?
I was just watching the feature full length film “Mediocre At Best“. More specifically I was Watching Drew Hosselton’s part and the song he uses happens to be one of my favorites. Ugly Casanova – Here’s to Now. Shouts to Bobby Kanode!

Do you have a fun fact about Albert that most people don’t know?
I think most people can probably figure this out. I’m a BMX nerd. I like to immerse myself in everything that has to do with BMX. I’m pretty transparent, haha. I love BMX.

How can people keep up with you these days? I know you’re always on your Twitter game.
Twitter for one! Haha @Albertmercato, Instagram as well @Albertmercato. Same handle. You can also peep the Kink and Shadow sites for updates.

Do you have any shout outs or thanks? Anything else you want to say?
Shout out to my Mom first and foremost for always supporting my choices no matter how dumb. All my SD Friends, Stephanie, Jay, Darryl, and all the homies at Kink, Ronnie, Chadwick, all the homies at SHDW, DITCH, WDMNCO, Chris at WDMN, Mariano, Doeby, $2 bills, up rails, hubba ledges, candy, DItchburn suggested ipad apps, instagram vids, 5 panels, firereds, Discounted Vans, VX’s, airport wifi, and anyone who has ever supported me riding bikes and has ever given me a high five.

You are here: Home / Interview / Quicky: Albert Mercado
Note: This site contains affiliate links and we could recieve a small comission that supports this site if you were to make a purchase on their websites using our links for no extra charge to you.