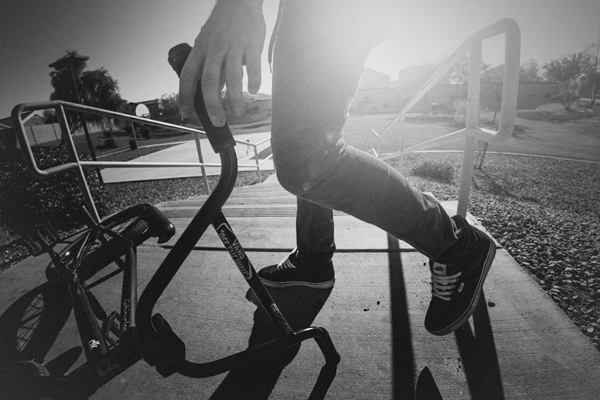 If there’s one thing that I know, it’s that if there is one guy who deserves every good thing that happens to him, it is Brian Kachinsky. After what seemed like a rough patch for Brian that we will call “2013” that involved losing sponsors, having new deals fall through, moving The Bakery to a new location and then being forced to rip it all out two months later, injuries and more. It would appear that things are finally starting to look better with the start of the new year for him. It was just announced yesterday that Brian had been added to the Vans team and this news couldn’t get any better. We figured it would be a good time to get ahold of him and catch up to find out what else is new. Let’s see what he had to say! 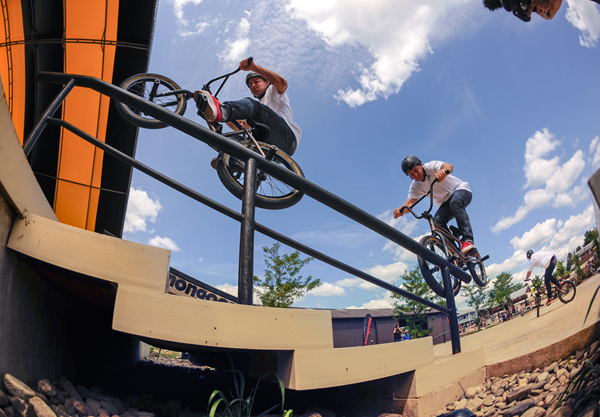 Alright, so The Bakery had its lease pulled out of no where and the second location and you were forced to tear it all apart and vacate. How crazy was that situation for you? Have you started hunting for a new location or are you going to put it on a hiatus for a while? I know the ramps are in storage somewhere…
The situation with The Bakery was both unexpected and very difficult to deal with. It was supposed to be in the current location for the next 2 years at least. Things changed that were, at the end of the day, beyond my control and the only option was to move the ramps/rails into storage here in Chicago until I find a new location for them. I have been looking for new locations but haven’t found the right match yet. I’ll keep looking while also brainstorming other projects with the same goal in mind. 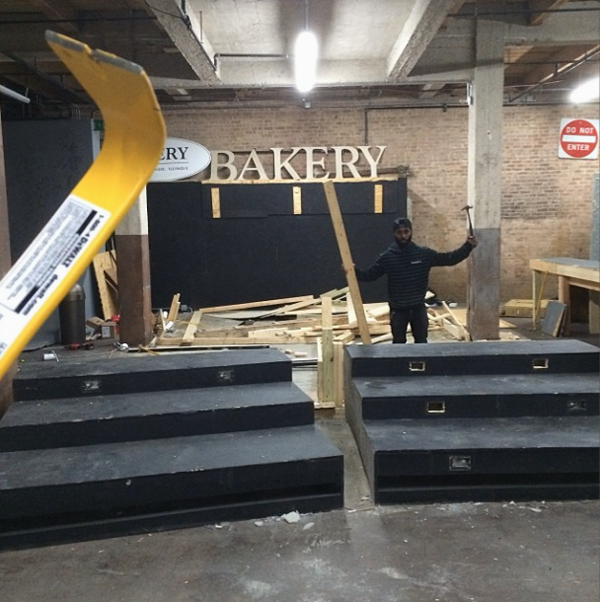 So it was just announced yesterday that you have found yourself a home on Vans for 2014 and 2015. After what seems like disappointment after disappointment between being let go from Etnies, then a deal with DC falling through… How stoked are you to have a brand like Vans to pick you up?
I couldn’t be more happy with how things worked out. The Etnies/DC situations left me confused and disappointed. Soon after all that Jerry Badders at Vans started send me shoes. I loved the shoes and the brand is nothing short of legendary. I’ve always seen the “First in BMX” and “Vans: Since 1966” but only until last year did it really dawn on me how legit Vans really was. They have been dedicated to BMX for the long haul. That’s important to me and why it’s such an honor to be a part of the team. Vans has a rich history and a bright future.

Do you have any plans sorted out with them at all yet? Team trips or anything like that, that you can tell us about?
Yes! We have talked already about some trips with the team this year. I love how diverse the team is but really excited to go on trips with guys like Roche, Sexton, Lacey, Bruno, Morrow, etc. These guys think the same way I do and love to go out and explore. We have talked about some other ideas as well. So far they are just a Post-It note on my desk but that’s usually been the starting point for everything I’ve done. I’m excited to have Vans behind me to make some of these things a reality. 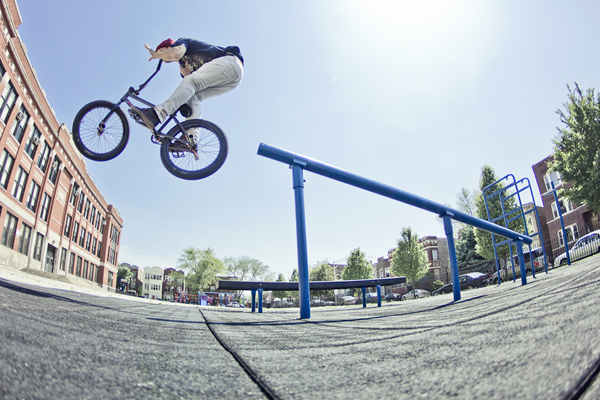 I’d imagine you have already started working on a welcome edit. Based on the photo you released with the press release making the announcement, I have a feeling you have been working on something with Justin Kosman? When can we expect to see something?
I met up with Justin in Arizona a few weeks back and we had a blast. I do have plans for a Welcome To The Team in the future but for now I’m just stacking footage for that and other projects as usual. I folded my ankle pretty good while in AZ which cut our fun short but we got some stuff done before I got worked. My ankle is getting better and I’m headed to New Orleans with friends and Costa Rica with Primo in the coming weeks. All this time moving ramps while injured has made me anxious to go out and ride wherever the sun is shining.

Have you been filming for anything else? I feel like there’s never enough supply of footage from you?
Yes, I always have footage/photos ready to use and will be hopefully getting enough to be satisfied with very soon. I’ve been filming a lot with Andrew Brady over the past year and we have some good stuff stacked up from all of our adventures thus far.

Speaking of videos and The Bakery… This has always been on my mind. Why was there never any footage of you riding the place online? I always wanted a full Bakers Dozen from you there? Maybe more of a Bakers Case because I know there had to be clips that you built up over the years…
I have filmed some stuff in The Bakery over the years. I haven’t filmed with the intention of a finished product because I never wanted The Bakery to be about me, I wanted it to be about my friends and the variety of amazing street riders there are out there. I always felt like it would be a bit weird to make a video of myself in there. The main benefit for is a place to ride with my friends, learn new things and portray BMX in a positive and motivating way. I created an environment for BMX riders to excel both with my friends locally and internationally. With the help of my team of filmers (Brady, Dybas, Loconte and Burkhart) we have created something special for everyone to watch and enjoy. Every pro who has visited has had a good time and pushed themselves. That makes me happy and is an adequate return for the work I put in. 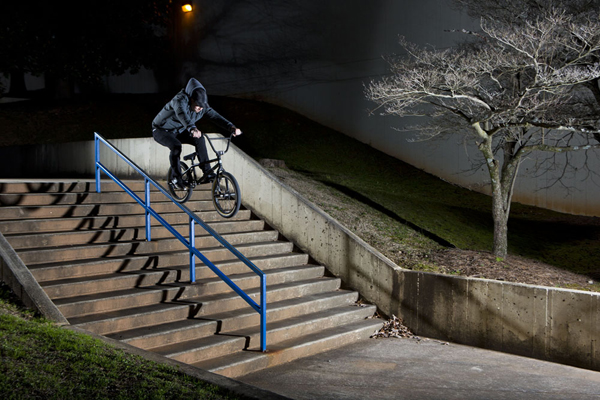 How are things going with DK these days? What are your plans for 2014 with them? I’d imagine they will have you on the road as much as possible as always?
DK is family. As of July 2014 I will be celebrating 10 years with them and it’s a pleasure to keep progressing and growing with them. They have some new products in the works and as always we are brainstorming fun things to do in the coming year and beyond. Everyone at DK rides and loves BMX which is important to me. I’m lucky to have a bike that I can enjoy riding and trust it will withstand the abuse I put it through. I’m excited for the updated versions of some products to come.

While we’re on the topic of travel… I saw you just picked up a new passport. What were the last 3 trips you got to put a stamp in it before retiring the old one? What will be the first 3 in the new one?
My best trips of 2013 were Bikes Over Baghdad in the Middle East, Russia and the Make It Happen trip in Hong Kong/China. All of these places were traveled with my best friends and I learned a lot along the way. 2013 looks like I’ll be heading to Costa Rica, Estonia, Chile and hopefully China again. I’m sure some other trips will pop up as the year progresses.

Out of all the places you have been over the years. Where’s one place you have NEVER been, but want to go to at some point?
Somehow I haven’t made it to Australia yet. I’ve been to it’s neighbor New Zealand but the BMX scene in Australia has always impressed me and I’d love to see it for myself. There are dozens of other countries on my list as well. I love to go anywhere anytime!

Any other sponsor news you can tell us about? Anything cooking with Primo, Arnette or anyone else? I feel like you probably have something cooking with Red Bull this year?
Primo is starting things off right with a trip to Costa Rica a week from now. I’ll be joined by Ty Morrow, Shawn Mac and Aaron Brenner. This will be amazing and warm. Arnette has been supportive for many years and I’m excited to hopefully do more with them in 2014 because we have a good tight knit squad that loves riding/traveling. Red Bull is a good friendship that keeps growing. I deal with them more locally here in the Midwest but they have always been down to bring opportunity and I also get invites to their awesome events they throw. I’m excited to see what fun stuff they have up their sleeve this year. Thanks Chase Garrett and Tim Binder here in Chicago for being good friends and always down for fun. 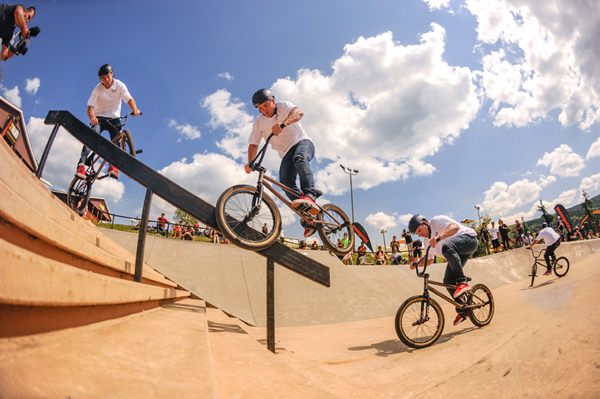 What have you been up to when you aren’t riding these days? Any new hobbies?
I’m always interested in learning new things on my bike and off. Lately I’ve been watching a lot of documentaries and reading a bit. More important that that, I’ve been able to spend some time with friends and family that I miss during my busy schedule throughout the year. I know so many awesome people and never get to spend as much time with them as I’d like. Sometimes you just have to take time out and enjoy life at it’s simplest.

What’s the last song you heard, movie you watched and website you visited?
The last song I heard was French Montana’s new mixtape, last movie was a PBS documentary on Prohibition and last website I visited was Facebook.

How can people keep up with you these days? Twitter, Instagram, Etc.?
Tons! I love keeping in touch with everyone. You can keep up with me on:

Do you have any shout outs or thanks?
Way to many to list but here goes: My family for always being supportive no matter what I do. My sponsors DK, Vans, Primo, and Arnette. Everyone who supports The Bakery whether it’s a sponsor, supporter or just simply clicking “play” on a video. All my friends in Chicago and around the world who make me happier, smarter, and keep me motivated.

Anything else you want to say?
I’d like to say “keep your feet on the ground but keep reaching for the stars” but that’s cliche and I’m only 5’9” (with shoes on). Maybe I’ll just suggest to everyone “Don’t eat yellow snow”.