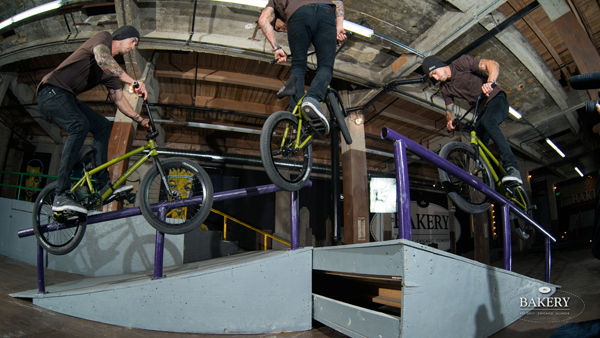 Rob is one of those guys who is constantly on the move and constantly doing cool shit! If you follow him on Instagram there’s a good chance that you see what he’s getting into on a regular basis. We figured between his new edits like the one from The Bakery the other week, to all of the traveling along with the guns and motorcycles we’ve been seeing in the photos, it was a good time to catch up with the guy to find out what’s new. Take a look at what he had to say!

What was it that first got you hooked on BMX? Any early memories just come to mind?
One of my frost friends I made when I moved to Layton rode BMX. I didn’t even know what it was at the time. He had an empty field by his house where he had a few jumps built up. I watched him ride those and it looked so fun. Ever since then I was sold on riding BMX. I was about 13 then.

How are things going with GT these days? I know they had a pretty heavy part in your new video from The Bakery. Do you have any fresh signature parts, trips or anything in the works you’re getting excited about?
I couldn’t be any happier with GT!! They take really good care of me and make my dream to ride full-time possible. They have really been stepping up their game and trying to be apart a BMX again. I know they sponsored Texas Toast last year and I believe they plan on doing it again this year. Of course getting Jeramiah and myself in The Bakery. They are on their way back up and I’m stoked to be part of it. I’ve been working on a new frame with them over the past couple months so I should hopefully see a sample pretty soon. 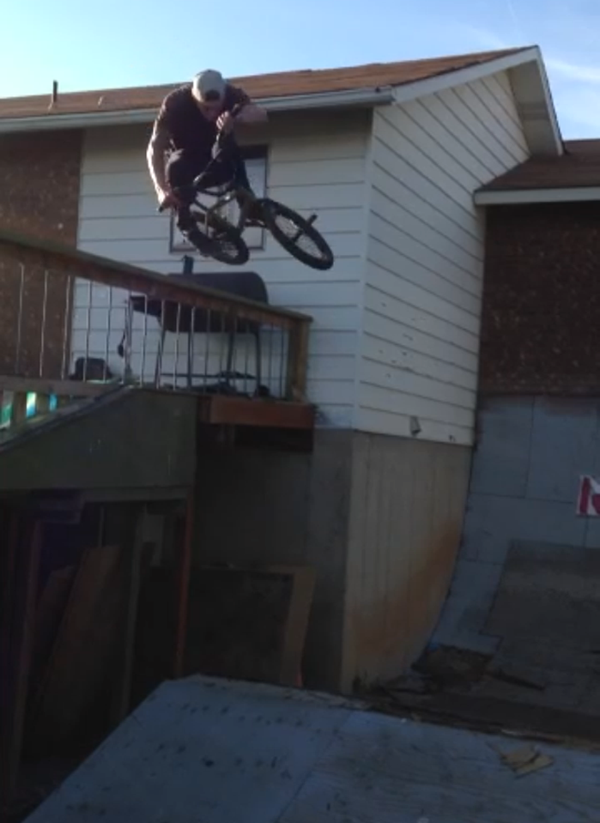 How are things going with Demolition these days? Seems like Brian and Joey always have something cooking with the team? Do you have any signature products, trips or anything going on there?
Things are really good. I love working with both Brian and Joey. We are working on revamping my signature fork and stem so hopefully you’ll see those by early next year. I think I’m going to start filming for a Demolition web edit here pretty soon! I’m excited for that.

You recently spent some time on the road with some of the guys for Skullcandy. Do they have any other crazy trips lined up? Seems like they’re always cooking up something a little different than most BMX trips.
I haven’t heard when the next trip is but I’m excited for it. They always do things right. The trips are gonna be good no matter what. With an amazing team and such a rad company it’s bound to be a good time. They have really been trying to step up their game with BMX as well it has been awesome to see and be apart of. I recently just did a in house tour of the warehouse. They showed us everything that goes into making headphones. I had no idea they could do all that kinda stuff right there in house. It was really cool to see. It makes me a lot more appreciative when I put on the headphones.

You recently spent some time in Barcelona with the Markit crew, right? How did that trip go? Anything else cooking with them you’re stoked on?
Yes! That trip was so, so fun. How could it not be with that crew and that many amazing spots? It was the last filming trip for the DVD. Everyone came home with some crazy clips and a lot of good memories. I think since we are done filming for the DVD we are kind of taking it easy for a bit. I’m sure we will start working on another project soon enough though. That’s just what we do, haha!

Any other fresh sponsor news you can tell us about? I feel like you’re due for a new pair of shoes…
Nope, I still have the same sponsors. No shoe deals yet. I haven’t really been pushing for it either. If it happens then that will be awesome.

So you’ve been on the move pretty constantly for a while now. Where all have you had the chance to go the past few months?
Barcelona, Denver, Oklahoma, Albaquerque, NorCal, San Diego, Chicago, Phoenix and Hawaii.

What’s on the plate for this summer? Anywhere you’re trying to get to that you haven’t been yet?
I have been tied up with Markit for awhile so now that I’m finished with that I’ll focus on filming for my other sponsors a lot more. Hopefully there will be some web edits dropping in the near future.

I know your video from The Bakery just dropped the other week, but I’m sure there’s a ton of people out there wondering when they will catch some more footage of you. Have you been filming for anything lately?
I just had a Skullcandy edit drop as well as a GT edit within the same month. I just had 3 edits drop really close together already. I’m going to be starting a Demolition edit and a Killjoy edit that I know of though. I’m sure some other stuff will come up too!

Speaking of that Bakery edit… Holy shit was that good. How did you feel it turned out? Were there any clips in that, that really kicked your ass?
ha thank you! i couldn’t be happier with it. everyone put in so much work. we were there for a good 8 hours a day filming non stop. the only clip that comes to mind is that backwards grind up the red rail to cab manual 180 over the little flat rail. the cab to manual messed with me for awhile.

How do you feel about filming? Are you more into filming for a video part over a edit? Seems like any time you have an edit drop it’s good enough to be in a video.
I love filming anything really. But I do feel like I’ll do things a little more risky for a video part verses a web edit.

What has been getting you stoked on riding lately? Do you ever find yourself getting burned out at all?
Mostly just riding with guys I do ride with lately. They are all so good and they are just having fun with it. It’s very motivating to ride with guys like that. I think everyone has their off days. I know after being on trips back to back for a while can get frustrating. You’re filming for a few different things at once but filming the same thing. It gets a little old getting stuck doing the same thing over and over. I can’t complain though. I’m still riding and traveling the world with all my good friends so it’s all worth it.

What have you been getting into when you get some down time these days? Any new hobbies or anything?
Lately I have been working on my house. I have been framing ing the basement bedroom and dialing in the yard. I feel like an old man starting to care about what my yard looks like, haha, but it keeps me busy.

If I remember right, you have a pretty sick motorcycle right? What are you rolling around on these days? How long have you been riding?
Yeah, I have a Harley nightster 1200. It’s bad ass! I love it. I’ve had it for about three years now. 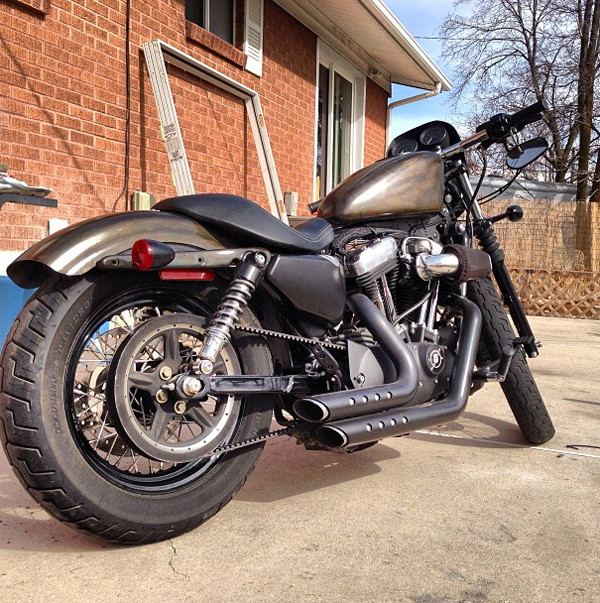 Do you have a dream bike or are you pretty content with what you have these days?
I love my bike now but eventually I wanna get something you can road trip in comfort. My bike is a perfect little city cruiser. One day I’ll have something a bit bigger.

I know you have been into guns for a while. Have you added any to your collection lately?
I just bought myself a Smith and Wesson M&P Shield 9mm. It’s really small and fun to shoot. I also got an AR15 that’s probably one of the most fun ones that I have. It’s getting to be a really expensive hobby lately with all the gun and ammo prices sky rocketing but we make due. 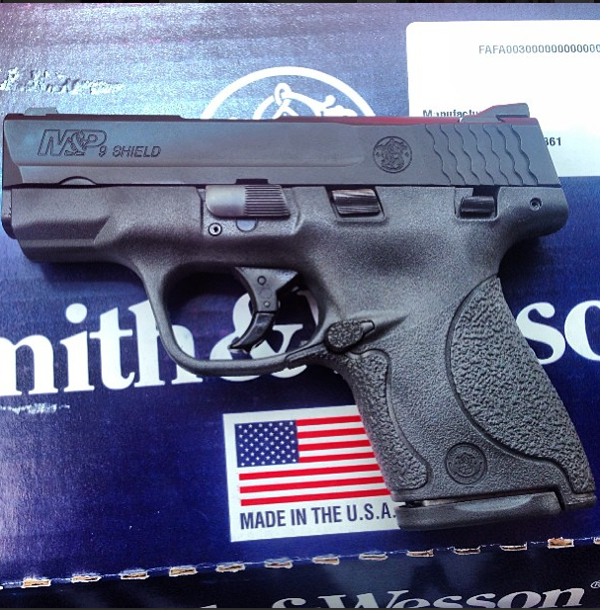 What’s the last song you heard?
I have my Billy Idol Pandora station playing right now and Depeche Mode – Enjoy the Silence just came on.

Have you been caught up in any sketchy situations lately? Care to share a good story or two?
I really haven’t had anything sketchy happen in awhile. the first story that came to mind after reading this was when I was in Ohio filming for That’s It with chris doily. We were at this school with the projects across the street. We were just minding our own business riding this curved bench and all these little kids started coming over from across the street. One kid was interested in how much the camera costed. We thought that was kind of odd for a 13 year old to wonder about that. Then we noticed that across the street there was a group of guys that were probably all our age just watching. Before we knew it we were surrounded by about 16 little kids. They all kind charged us grabbing handle bars trying to steel our bikes right out from underneath us. Other kids were trying to take the the camera bag off the filmers back. then I remember seeing a kid jump up and punch Doyle in the throat. We ended up getting out of there with everything but we were all kind of shook up but laughing at the same time because we just about got robbed by a mob of little kids, haha.

Do you have any shout outs or thanks?
Huge thanks to all my sponsors, friends and wife that have been supporting me through all these adventures I have been on. GT Bikes, Demolition parts, Skullcandy, Markit, and 5050 BMX. You guys have made all this possible and I couldn’t be more grateful for everything you guys do for me!!

Anything else you want to say?
Now stop reading this and go ride your bike and have some fun!