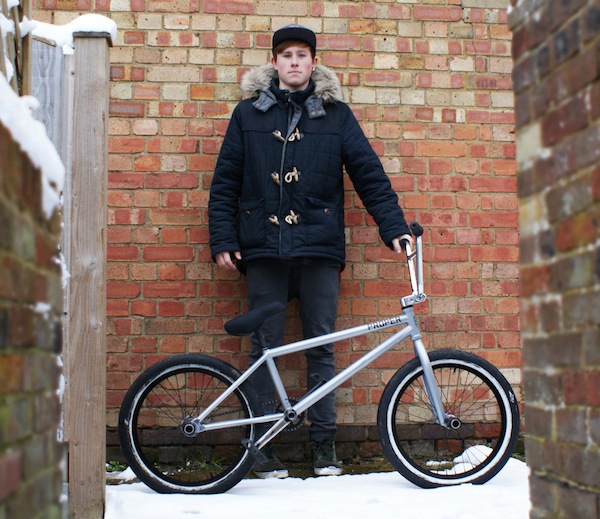 I don’t know whether it’s the fact that I’m getting older, more bitter and shitter at riding, or that the amount of young kids who can do whatever they want on a bike these days is increasing rapidly. Sam Cunningham is 17, still lives at home, can’t legally drink yet (although that rarely stops him), doesn’t have a job, but can do pretty much every trick I wish I could do, and makes it look way better than I ever could anyway.

Despite this, Sam is one of the most humblest dudes I know, and has been ever since I first met him four years ago down my local. Since then Sam has developed into an incredibly talented and motivated rider who clearly has a bright future in BMX, and is killing in no matter if he’s riding or partying with his mates in a town near you.

Getting added to the Proper Bike Co team last year has deservingly bumped Sam up into the limelight and I’m stoked to see where riding his bike will take him this year and onwards  I had a chance to catch up with him and see what’s good just before he took off for a month long adventure to California. If you happen to be in SoCal and see a sun burnt British kid shredding, be sure to say hello. Check out what he had to say.

What was it that first got you into BMX? Any early memories just come to mind?
I was 13 I think, and just skated at the time, and I remember seeing Lloyd Wright do a barspin disaster at my local skatepark in Chesham and i just wanted to ride a BMX after that!

So It was announced recently that you have joined the Proper Bike Co Team. How did that opportunity come about and how are things going so far?
I just got a call from Dave at RADBMX Shop saying that he had had a phone call from IMG it it just went from there I guess! Things are going really well and I’m still stoked on it!

Your first team trip was to Bilbao is Spain, how did that go? What was that little guy all about?
Yeah it was rad! Place had some ridiculous spots as well as the peak of night life being a metal bar haha…. Trip was sick for sure though.

Ahh that guy was too funny! Whilst we were filming some clips on another amazing spot and he just started yapping a load of Spanish to us and doing weird shit. At first i though he was trying to stop us riding but he was just having a laugh, probably the nicest local we met the whole time… 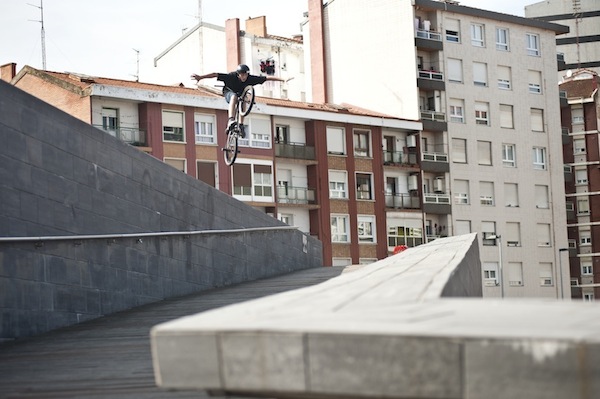 Anything in the works with Proper for 2013?
Yeah the new line of products are looking cool! And there are some other things going on but I guess you’ll just have to find out…

You’ve spent a fair amount of time this Summer travelling around the UK and riding and partying in different places, what have been some of your highlights?
Yeah I’ve been traveling around filming for Proper, but due to a series of injures/trips/weather its taken a lot longer than planned! I’ve been off for a good few months now due to a back injury that i’m still having issues with. So that sucks, but I’m in good spirit. No particular highlights! Brighton is always a treat, being down in Essex, had a rad time in Bournemouth as well.

Where can you normally be found riding, what is your local scene like?
Haha my local park is a terrible council job and I haven’t been there in so long I don’t know what the scene is like anymore! Probably a chav on a scooter.  But i’m in Essex a lot, but I’m never normally riding anywhere in particular. 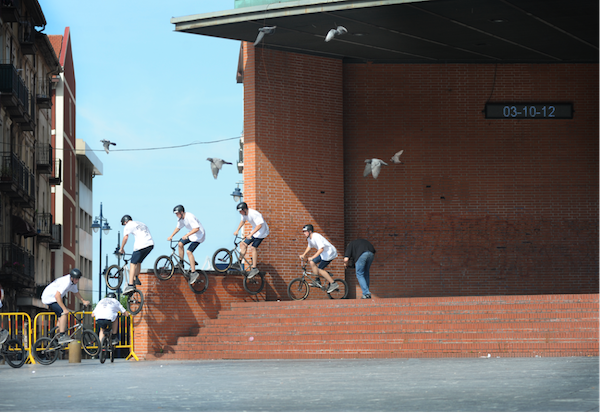 I keep seeing “FTL” recently, is that a local crew of riders? What’s it all about?
Ain’t nothing serious that’s what its all about. Just a whole bunch of mates having fun. @FTL_

RAD BMX have been hooking you up for some time now, what is it like to be hooked up by such a dope shop?
Yeah been just over a year and a half now! Its so sick man, Dave has looked after me and kept my head straight, always pushing me in the right direction with whatever I’m doing! As well as the owner of the shop he’s also one of my closest friends, so its really cool to have that support.

Who are you normally riding with these days, who are your biggest influences?
I always have the best rides when there’s a good crew and everyone gets pumped off everyone. All the CTNS boys in Romford, the FTL crew! Its always rad to meet new people though. Damn I have a lot of influences! Definitely my friends who i ride with. Rider-wise Craig Passero, Tony Hamlin,Benny L is a big influence to me as well. Always banging new grind combos that I’ve never seen before, and so dialed. Dan Boiski is the most F rider I’ve ever seen and is one of the soundest dudes too. My boy Adolfo always gets me stoked to try new stuff. And as much shit we give each other its always a treat to have a ride with my top lad Bruza and his lovely sibling haha. 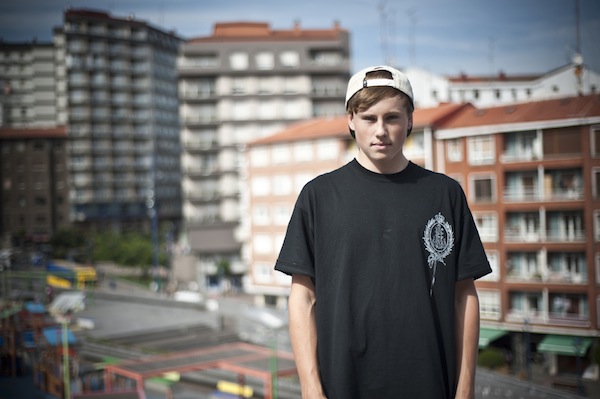 If you could travel anywhere with you bike, where would you go?
I’m heading to Cali at the end of January for a month with my mate Jake Ellis so that’s one of them! Still haven’t been to Barca, gonna try and go there this year for sure.

When your not on the bike what can you normally be found doing? What takes up your time outside of BMX?
Well at the moment I’ve been doing a load of nothing because of my old man’s back… But usually if I’m not riding I’ll be either skating, filming, editing or just straight chilling.

I notice that you are a big advocate of riding with a helmet and can rarely be found riding without one, even when riding street. What is your opinion on riding with a lid and your feeling on people that don’t?
Yeah it’s almost been a year since I started wearing it all the time. I’m pretty sure it was after Aitkens killjoy section (if you haven’t seen it watch it and you’ll know what I mean) it made me think a bit more about wearing one. I don’t really have any opinions about it, or people that don’t wear one, it’s just personal preference.

It seems crazy that when I first started riding having 4 pegs and a high seat was pretty rare and almost uncool, and nowadays it’s pretty much the standard setup that most people especially younger riders are sticking with. You ride 4 pegs and seem to have most grind tricks down and on lock, have you always been a fan of that style of riding?
Yeah I like the whole 4 peg thing. It’s cool to have all the options available to you. Well I’ve always leaned to the street side of things, maybe because of having a pretty sucky local skatepark. I still remember back in the day me and my buddy matt would go and ride the same two-set after riding the park for 15 minutes!
I do love hitting a nice set of trails every now and again though….

What are three good reasons to pick up a bike and go ride?
Good friends, good weather and a good place to ride! 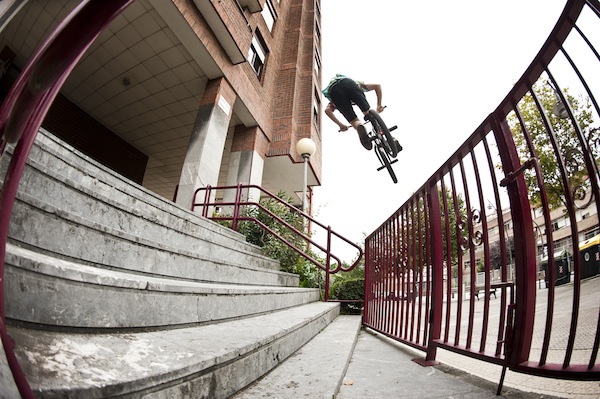 What’s the last song you heard, movie you watched and website you visited?
Lee fields-I still got it
Wrong turn 2
The Berrics

Where do you see yourself in 5 years?
Hopefully still doing what I’m doing now!

Do you have any shout outs or thanks?
Obviously a huge shout out to Proper/IMG, Dave at RadBMX Shop, Southern Structure and Luke Duffy at Surpass. Mikey, Puffy, Max and Adolfo in Brighton for always hooking me up with a place to stay! Jake Ellis for giving me pretty much a second house in Essex. Shout out to SBD at PWS for powder coating my bike! Creasy for always giving me a wristband so i can get into after parties, and everyone who I’ve ridden, partied with in the last year!