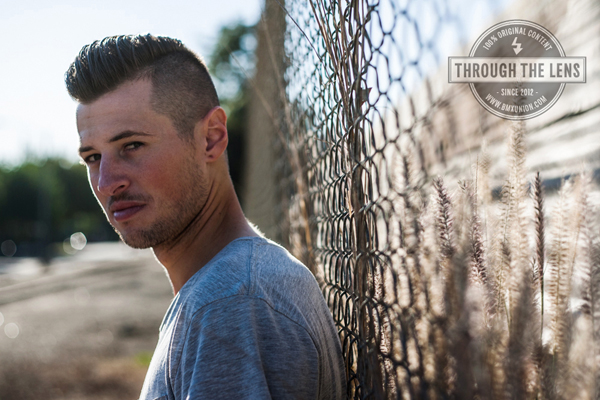 Kevin Kiraly is one of the few pro riders out there these days that are pushing BMX in a positive direction and actually offering something unique as a rider. His technical skills on a bike come from years and years of dedication to what he does. He is one of the pickiest riders I know when it comes to spots, filming, and shooting photos but when you realize it’s because he wants to make everything look perfect it all makes sense. Kevin is a visual rider and knows what tricks should look like when they are done the right way so it’s all about finding the best trick for that specific spot which obviously could take a while. Kevin actually put out a part and won The Hunt video contest last week and came down to the premiere to celebrate and hang out so it was a perfect opportunity to catch up and find out what he’s been up to and what he has going on for the rest of this year. Enjoy. 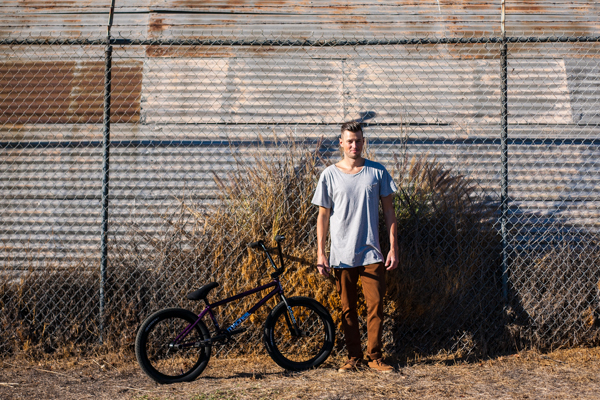 So, what’s been going on lately?
I’ve just been resting up. My body is pretty thrashed from the last year and a half of riding and filming.

Congrats on winning The Hunt, your part was on point. How long did you film for and who ended up filming your part?
We only filmed for three months. The last month though was just going out trying to get my banger, and having a bunch of bad luck.

How did that whole project come together? Was it your idea to film a part originally?
No, I was talking to Justin Kosman one day and he asked if I had some footage laying around, I told him I had like five really gnarly clips just chillin’ and then that’s when he asked me if I would be down to film a part.

What was the most difficult part of the process? Filming? Riding? Editing? I know that you do a lot of your own editing so did you work with Justin on that or did he end up putting it all together?
The difficult part was just getting my banger. I broke like four stems in the process of getting it, and it took over a month to get one trick. No Justin just filmed it, I produced, directed and edited it, haha. 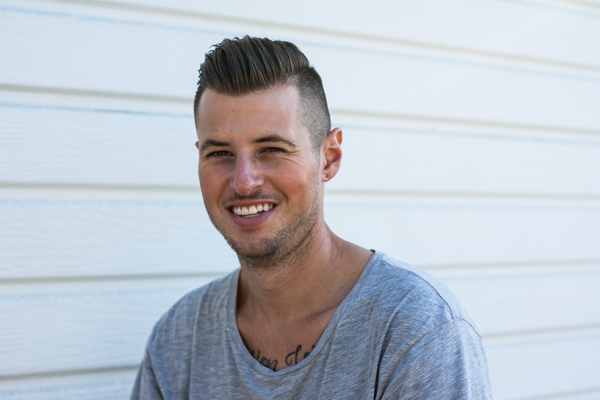 You also rode Dew Tour Street for the first time in San Francisco and it’s an honor just to get an invite to those things. How did that go and do you enjoy the contest atmosphere?
Yeah I get really hyped getting invited to those. I love contests and only hope that I get invited to more in the future. They are just really fun and you can’t beat getting to ride a dope course with all of your homies.

What else do you have planned for the rest of the year leading into 2014?
Nothing really, just healing up so that I can get back to filming.

How is everything going with MacNeil? I know that you have a signature frame with them. Any word on how that’s doing?
Everything’s fine, and I think its doing good. We’ve sold a good amount and right now MacNeil’s working there way back up. They went away for a lil’ and are now back better then ever. I love the products and truly believe that they are one of the best companies out. Oh, and they’re also working on a new DVD. 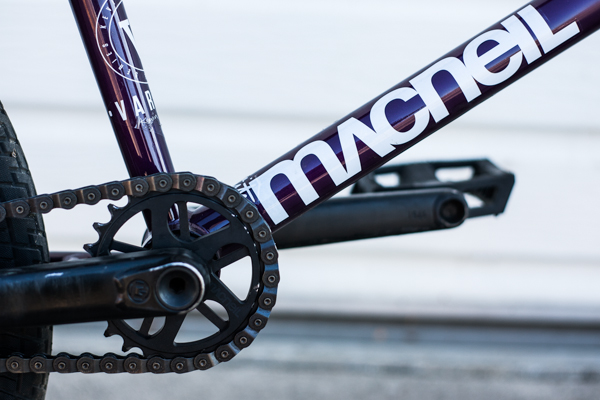 Any team trips or video projects?
I’m pretty sure no trips at the moment, I wish though, haha. Like I said, MacNeil is doing a video though. I haven’t filmed anything for it yet but I hear the Canadian dudes are stacking.

You have been really pushing the whole “switch” movement in BMX and I would definitely say you have helped other riders think a little differently when it comes to riding which is rad. What are your thoughts on that?
I’m just trying to do my own thing and doing switch and oppo tricks are what I’m into at the movement, I want to do all of my tricks both ways and if other riders are pumped on it because of me then that’s awesome.

It’s obvious that you are influenced by skateboarding and I know for a fact that you follow the industry pretty closely. How does that affect the way you look at riding?
The skate industry doesn’t really affect my outlook on BMX at all, but sometimes I just wish BMX companies would take notes on what they do because they do it right. I just like watching skate videos for the spots and filming, I don’t like anything more than BMX! 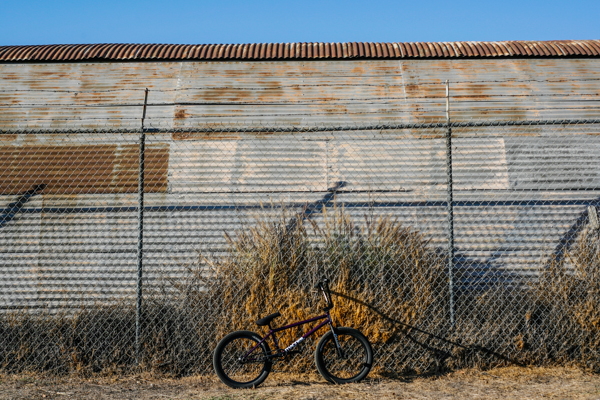 People obviously will eventually stop looking at spots and turning it down because “it’s not their way.” When you ride the way that you do, a spot is a spot no matter which side it’s on. What does the future hold for BMX street riding?
Yeah, that’s why I love riding 4 pegs because I can roll up to any rail or ledge and it doesn’t matter what side it’s on anymore. I don’t know what the future holds but I 100% think it’s going to be the biggest aspect in BMX.

Well then, this also qualifies you to have a say in the difference between “switch” and “opposite” so fill everyone in on your thoughts on that.
Switch is only when your feet are switch, the true Hickerson way.

You had a part in the Deadline DVD, as well as The Hunt, what’s next? What will you be filming for?
I will be working on my MacNeil video part probably, and just more bullshit web edits.

How do you feel about the current state of BMX and what is it that you think the industry needs to progress?
No comment.

You have put out solid parts on the Internet and on DVD. What method do you like better and why?
I don’t know, I like them both but I kind of like working on a solo part a little more just because I can do my own thing and not worry about anyone else’s stuff.

What are your top three favorite BMX video parts of all time?
Garrett’s part in Deadline, Danny Hickerson’s Empire part and Dennis in the Markit DVD.

If you could take a trip anywhere in the world to ride right now, with a small crew, where would you go and who would you take?
I would probably go back to Australia, and take my Livermore homie crew. 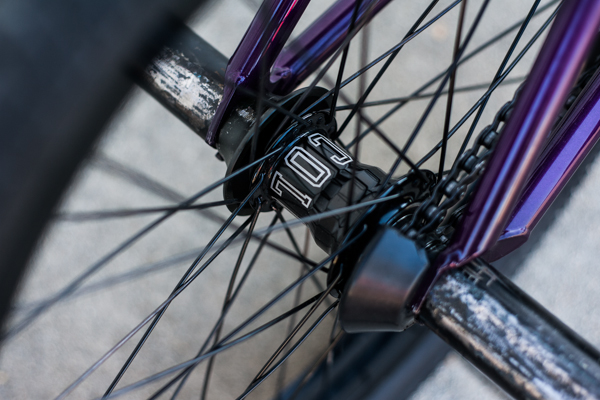 If you had to pick one rail to ride for the rest of your days what would it be and why?
The Modesto rail R.I.P. It was just perfect for messing around, learning and filming crazy shit on.

You have a spot-list in your head at all times and are pretty picky about what it is you want to film or shoot. What’s the deal with that?
I don’t have many tricks so I have to pre-plan them.

If you had any advice for young kids looking to pursue riding as a career what would you say?
Don’t do it unless you’re as good as Garrett Reynolds, Nathan Williams or Dennis Enarson.

How different is BMX now from when you started riding as a young kid?
I don’t know, I’m considered a professional now and definitely wasn’t back then, haha.

If you had the power to change anything about BMX, what would it be and why?
I would just like to see everybody who works hard get taken care of the way that they should.

That’s about it for now, why don’t you give out some shout-outs and thanks.
Thanks to Pavia and The Union for the interview, thanks to my sponsors Macneil, ODI, Casual BMX and thanks to Justin Kosman for putting on The Hunt.

Any last words?
Fucks wit’ it. 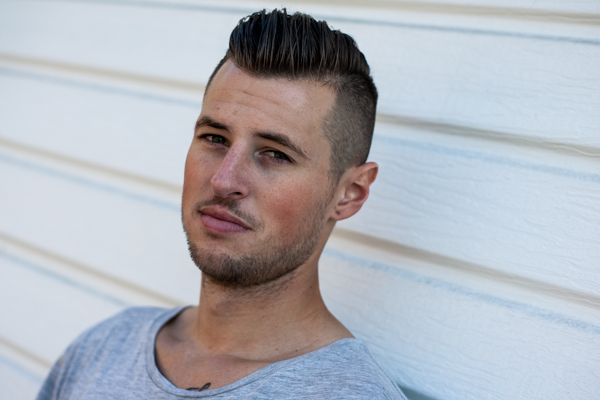 That’s it for this week. I love having the opportunity to be able to interview some of the top riders out there that I can also call my friends. Kevin is helping progress BMX, and push riding forward and as a pro rider, that’s all anyone can ask for. Be sure to check back next Wednesday for the ninety second edition of Through the Lens and as always feel free to leave any questions in the comments section or email me at info@jeremypavia.com and I will hit you back as soon as I can. Feel free to follow me on Twitter and Instagram @jeremypavia.