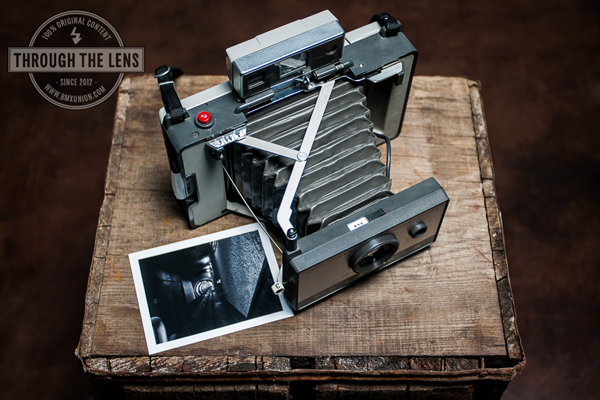 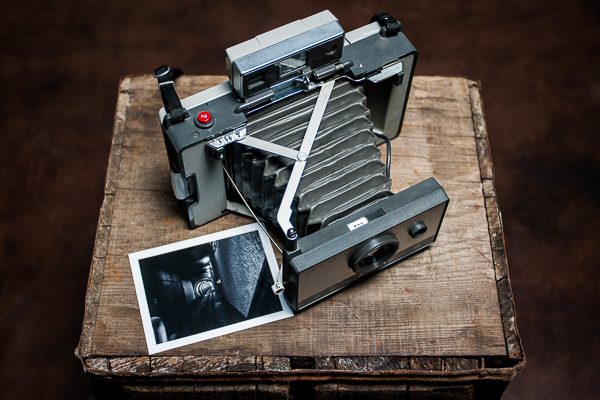 This came out in 1965 and was actually marketed as one of the “easiest” cameras out there to use at the time. Obviously now that does not hold true whatsoever especially seeing as how the average person would have no idea what to do with it. In all reality though once you get used to the quirks and really get a feel for it, it is simple to use. It produces some amazing results when the lighting is just right and it’s just an awesome piece of photographic history. The film is still readily available and fairly cheap (around $10 for a pack of 10) which isn’t all that bad. It’s pretty amazing to think that this camera has been around for well over 40 years and it’s still going strong. The person that had it before me updated the wiring where the battery goes and besides that, it’s all-original just how it came out of the factory. It takes a while to focus, and it’s a little tricky when it comes to shooting a sharp, perfectly exposed photo. But when it happens, and you peel back the paper to see your photo come to life right before your eyes, and it’s exactly how you pictured…you can’t help but want to take more. I’m definitely addicted. Not only that, but it’s a great conversation piece. I guarantee shooting with this will get more looks than any top of the line $7,000 Canon DSLR. 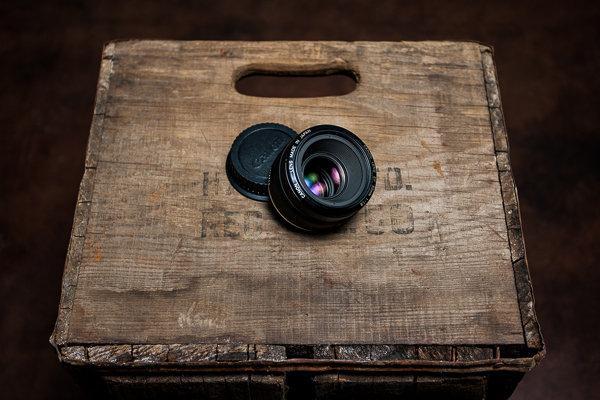 This is my “fast fifty” and one of my favorite lenses in my line-up. There are actually two different versions of this lens and this is the older version, which I prefer to the newer one. The main difference is the metal mount, and the distance window, both of which the newer ones don’t have. Even though the glass is technically the same I prefer shooting with the older one. For some reason I feel like the bokeh is a little different on the old one. I just love the way it looks. Plus, they stopped making them that way in 1990 so I like the fact that I have one of the ones that were built to last when compared to the plastic version of today. I shoot nearly every column with this lens and use it to some degree on almost all of my shoots. This lens gets used quite a bit, and for good reason. 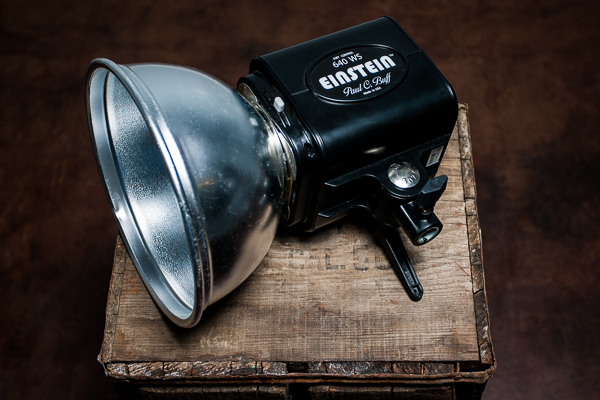 This is one of my favorite pieces of gear for sure. I used to shoot mainly with Lumedyne, Quantum and Sunpak flashes for years and after a while, the un-reliability really started to get to me. I couldn’t be on a high-paying shoot and have my gear simply not work. That is why I invested in a couple of these and have never looked back. This one has a 9-stop power variability, all digital LCD display on the back, an action mode as well as a portrait mode, and some serious action stopping power. It’s just a great all-around flash. I use them in the studio and on location for almost every shoot that I do. As long as you take good care of them, you can rest easy knowing that your money spent was well worth it. Plus, Paul C Buff is a badass company that simply makes badass gear. I use two Einstein’s with two vagabond mini battery packs, which are amazingly light and last a super long time. Also, if your battery dies, you can always just plug the flash directly into any household outlet making it even more convenient. No batteries to worry about means more shooting, and that is mandatory, especially on commercial shoots or fashion style shoots when you are going to be firing off shot after shot. This is definitely gear I wouldn’t want to live without. 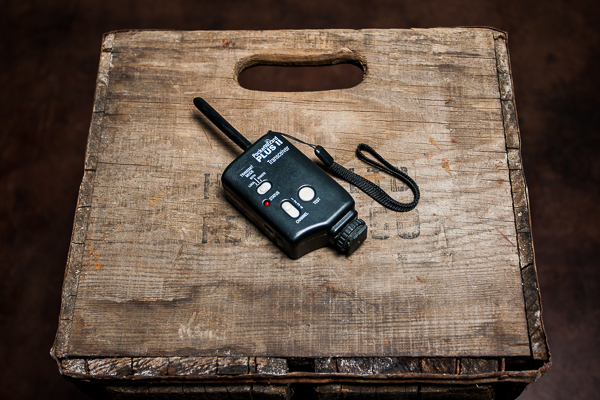 These are actually no longer available but the funny thing is that I haven’t had to even think about transmitters/receivers in years because I have had five of these with almost no problems at all. They are built to last, and from my personal experience they definitely do. Another company putting out amazing gear that is meant to keep you shooting which is the number one goal. The consistency of these things is amazing and it puts your mind at ease knowing that your strobes will fire no matter what and it lets you focus on your job instead of messing around with a flash that wont fire because you have a cheap transmitter. This is one of those pieces of gear that I can’t stress enough how important it is to invest in the quality version. Yes there are cheap transmitter/receivers out there but in my experience none that compare to PocketWizard. You can shoot from as far away as you need to and you can also shoot through walls and around corners, which definitely helps in the field. 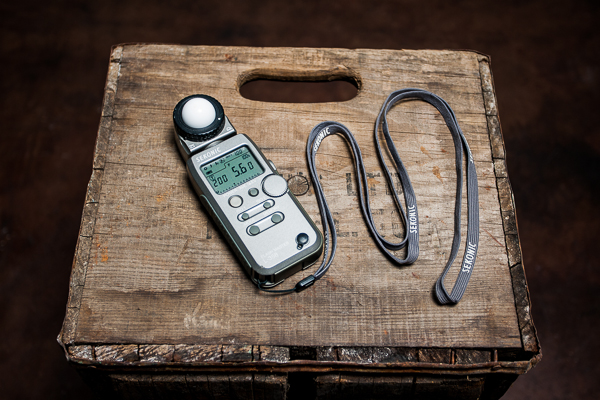 Now this is one product that I can’t live without. As a professional photographer, it is essential that your exposure is spot-on and there is one foolproof way to do that (especially in a studio setting) and that is by having a reliable, handheld light meter. I have had this thing forever and it’s been there for me more times than I can count. I actually used it to set up all of the shots you see in this week’s column. It’s just an amazing tool to have in your bag and although everyone has a digital camera these days, that doesn’t mean it’s no longer necessary. Even though you may have a good in-camera meter, it still won’t be as accurate as a good handheld meter. Do some research, and make the investment, you won’t regret it. Also, if you are any kind of serious photographer, and you don’t have handheld light meter that you frequently use, you should seriously consider adding one to your gear bag. 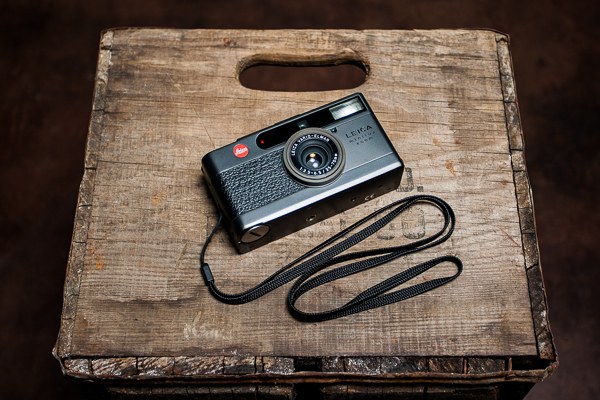 This little camera is one of my favorite cameras out of the many that I own. I love the styling of it, I love the look of it, and I love the feel of it. It’s fully automatic, and the exposures are almost always spot-on. Since it’s a film camera, you can capture such detail in lights and darks in a way that you simply can’t with digital. I have had it for a while now and enjoy just having it around to grab and go. It’s amazing for street photography and it’s rad as an extra camera just to cruise with. I love loading it up with film and having it with me to mix things up a bit. My main workflow is nearly all digital so I try to shoot as much film as I can to keep things interesting. I actually am in the process of scanning and editing 9 rolls of film that I shot over the past 6 months or so and the majority of them were shot with this. Do some research and check them out, they are pretty affordable too.

That’s it for this week. I hope you enjoyed a look at a few of my essential pieces of gear and the reasoning behind it all. Everyone is different, and everyone has different opinions on what they like and don’t like. When something of mine gets used over, and over, and over again I tend to stick it in the favorites category. Thanks again for keeping up with the TTL series. Be sure to check back next Wednesday for the eighty fifth edition of and as always feel free to leave any questions in the comments section or email me at info@jeremypavia.com and I will hit you back as soon as I can. Feel free to follow me on Twitter and Instagram @jeremypavia.