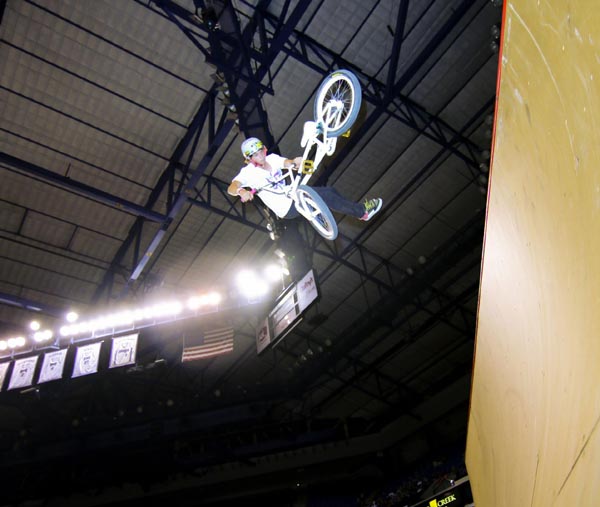 LOS ANGELES (July 19, 2011) –ASA Entertainment announces the return of MegaRamp® ASA Triples to the OC Fair August 3-7. Fresh off of shutting down Times Square with the “Air in the Square” BMX and skate competition, ASA brings their MegaRamp® ASA Triples format back to So Cal—bigger and better than ever.
New to this year’s competition is a five-day format with live competitions daily featuring the world’s top BMX and skateboarding pros in head-to-head elimination battles, concluding with an all-new Audience Choice contest on Sunday.

This year, top BMX riders such as Brett Banasiewicz, TJ Ellis, Colton Satterfield, Austin Coleman, Zack Warden, Vince Byron, Ryan Guettler and Pat Casey will be competing in a series of unique head-to-head battles on the Triples ramp: a 195-foot long course with a 25-foot high roll-in, two 25-foot wide jumps and a 14-foot high quarter-pipe. The Triples format combines the best of dirt, park and box jump skills and challenges the athletes to show off their best three back-to-back tricks in a go-for-broke manner. The head-to-head format of the competition makes the contest easy to follow and brings fans to the edge of their seats.

The OC Fair event includes skateboarding on the MegaRamp ASA Triples course for the first time in So Cal, drawing some of the top MegaRamp skaters to participate in daily jam style sessions. Some of the industry’s most daring pros will take on the MegaRamp® ASA Triples course, challenging each other to perform their most spectacular stunts in pursuit of the Audience Choice title each night. The skateboarding contest offers fans the ultimate level of participation, where people at the event actually help determine the winner.

Tickets for the MegaRamp® ASA Triples are just $12.50 for August 3-4 or $15 for August 5-7 and include admission to the OC Fair. Tickets are available at http://www.ticketmaster.com or the OC Fair box office. For details on the event and a full roster of riders, visit megaramptriples.com.

For more MegaRamp® ASA Triples action, tune in to FSN July 22 at 5 p.m. and 11 p.m. for exclusive coverage of this summer’s “Air in the Square” in Times Square, New York City.“