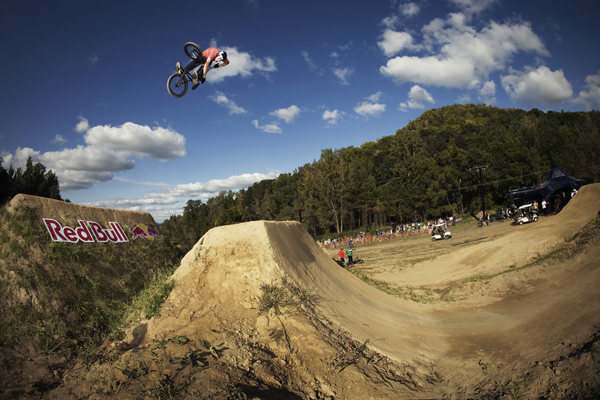 September 24, 2011 – (Wabasha, MN) – There was no snow necessary to make a dream downhill run at the Coffee Mill Ski Resort in rural Minnesota this weekend. Luke Parslow put on a non-stop BMX dirt showcase to win the top spot with a barrage of flip tricks. In a flawless two hour session he blasted a 360 backflip, a backflip tailwhip and a double backflip. That was enough to earn the respect of his fellow riders, who awarded him the prize in a contest Parslow called, “the best contest since Red Bull Elevation.”
A first of its kind, Red Bull Dream Line features an unrestricted trails-style course that sent riders to skies and back down again. Sixteen riders hit 13 perfectly groomed jumps in a self-judged contest that encouraged skill and creativity, like Mike ‘Hucker’ Clark’s opposite truck downside 360 whip, a trick which has rarely been seen before.

Red Bull Dream Line project was conceived by BMX pro Anthony Napolitan as way to privately train and develop his tricks. Given six weeks and complete freedom to develop and groom the course to their liking, builders Adam Aloise and Dave King (who previously worked on Red Bull Elevation) began to shape Anthony’s private playground. The course proved to be so amazing he couldn’t keep it to himself, and devised the contest to invite 16 of the worlds best BMX dirt riders to session and see what could be done on a course that includes a 35ft step-up and a first-of-its-kind near vert berm gap named “the shark fin”. Top names in the sport made the trip to Wabasha to see the dream in person, including Red Bull Stomping Ground winner Brandon Dosch, young star Dennis Enerson, and sport legends like Chris Doyle, Cory Nastazio and Brian Foster.

The self-judged format allowed riders complete freedom to judge with no set criteria. On Friday, September 23rd, sixteen riders competed in two heats of eight. The eight athletes in the non-riding heat judged their peers. The top eight moved on to Saturday’s Finals. During a 45-minute jam, Enerson landed a 270 tailwhip on “the shark fin” and Parslow and Hucker both closed down the session with a double backflip on a massive 35ft step-up.

While there is prize money up for grabs, the goal of the contest is take a step back and enjoy riding with freedom from timed runs and the pressure of live TV, on a course that had no rules or constraints. For Napolitan, the event proved to be a dream come true, “This contest made a huge impact on BMX dirt, the riders are psyched and I couldn’t be more happy.”