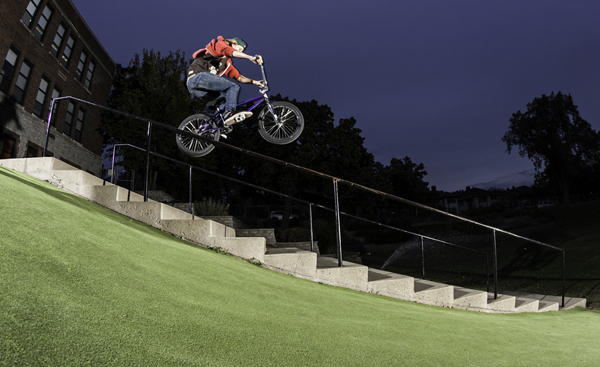 Over the years I’ve watched Reed grow up from a little guy doing turndowns on a bike that’s too big for him to this excessively tall street beast that can absolutely destroy rails and spots. It seems like since he got picked up by BSD two or so years ago already, his riding has progressed an insane amount. The crazy part is that he balances going to college full-time between all of the rail destruction, trips and responsibilities being a pro rider entails these days. With Reed’s new Sun Ringle edit due to drop tomorrow and Cody York sitting on some rad photos, we figured it would be a good time to catch up with Reed to find out what’s new with him. Let’s check out what he had to say in this new Quicky!

So what’s up, Reed? How has the Minnesota winter been treating you? I saw you made it south for a little while, right? How was that?
I’m currently putting off some Spanish homework, this is a great way to keep the procrastination going. Minnesota has been cold. I went out to Arizona for a few weeks back in January and it was dope! Warm weather, nice spots, and a bunch of good friends. You can’t really ask for much more than that.

You also spent a few weeks in the UK on the BSD trip a while back, how was that?
The trip was amazing! BSD sorted out a flat in Glasgow, Scotland for the team to stay at during the summer. David Grant, Tony Malouf, Jeff Cadger and I were the American dudes who lived there with BSD’s UK filmer, Dave Sowerby. Staying in one place the whole time rather than road tripping around was sweet because I actually got to figure out my way around the city. Glasgow has spots for days! 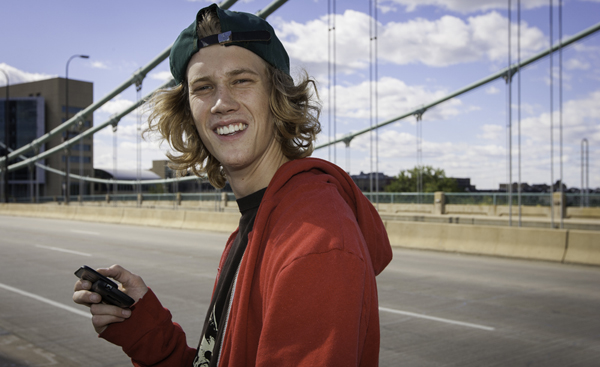 How are things going with BSD these days? What does Grant and Tony have in the works for you for this year? I’d imagine you’ll be clocking plenty of miles this summer.
Everything with BSD has been sick! Grant listens to the riders and I definitely appreciate it. The plan is to have Malouf film a DVD now that Dave Sowerby has filmed a few. I think BSD is sending me to Russia and Greece when I’m done with school. That would be a wild one. I also wouldn’t mind taking a trip to Virginia to grind this huge kinked rail I saw in a web edit.

Your signature Giraffic bars have been out for a minute. How does it feel to have a signature part? Have you randomly bumped into anyone running them? Was that weird?
It’s quite nice! I always get really stoked when I see people riding them, especially if they kept the sticker on. Seeing people wearing the Giraffic shirt is a lot crazier than the bars though, those kids are true giraffes.

Other than the obvious reason, how did you get the nickname Giraffic? Who started calling you that and why?
I’m pretty sure it was a Grant Smith creation on Megatour 10.  He’s always talking smack. The combination of me being a mark, the movie Jurassic Park, and my giraffe-like characteristics formed the “Giraffic” nickname.

Do you have any other signature parts coming through any time soon?
I don’t have anything planned at the moment, but I’m really excited to get David Grant’s new signature frame. I was pushing for a 21.8” top tube length option, but 21.6” should work out good.

So your new Sun Ringle edit is dropping tomorrow morning. How long did you work on that one for? What clip in the video kicked your ass the hardest?
I’ve been filming in Minnesota with my brother Kyle for that last year or so when I’ve had time between trips and school. The wallride 180 over the rail most certainly kicked my ass the hardest. It took so many tries. I was beat.

Do you have anything cooking with Sun for this year? There’s gotta be some sort of trip with a full Taco Bell budget coming up…
The Taco Bell budget might take me all the way to Virginia, but it’s a bit too far ahead to think about. I remember hearing a plan to have a Sun house in Milwaukee this summer. Shit would be good, that city is cluttered with spots. 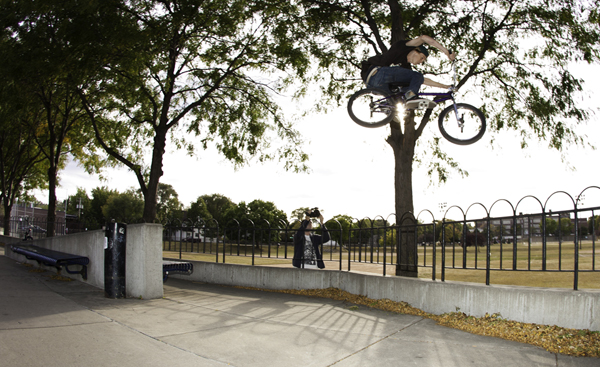 Now that we’re only a few weeks away from being able to actually ride outside again here in Minnesota, what are some of the things you’re looking forward to?
A few weeks is pushing it, but I dig the wishful thinking. I have a really long and growing list of clips that need to be filmed in Minnesota. Kyle and I will start crossing stuff off as soon as the ice melts.

What have you been up to when you aren’t on trips or riding these days? Any new hobbies or is homework filling up all of your time?
Going to class and doing homework takes up nearly all my time. My roommates and I recently joined an intramural broomball league that plays once a week. Eating shit on ice is pretty fun. We get loose. Outdoor hockey is a good activity as well.

How do you balance the pro life and college? I feel like they kind of conflict each other with the travel time and the amount of time required to hit the books.
I just ride when I can. My sponsors understand the situation and plan trips when I’m not in school. I can’t thank them enough for their flexibility. I get a month off for winter break in January, a week off for spring break in March, and then summer vacation lasts from May to the start of September. I can’t complain.

You’re currently a junior at the U of M with a double major in Journalism and Mass Communication and Advertising and a minor in management at the Carlson School of Management at the University of Minnesota. What do you plan on doing with your degree?
I could see myself doing brand management and advertising for a company within the BMX industry, but somewhere down the line I’d also like to work outside of BMX at an advertising agency. The program I’m in at school is preparing me to do a wide variety of different things related to strategic communication.

What do you think about the “career as a pro rider vs. going to college” topic? If you could make enough just to ride you bike for a living, would you still be in school?
I’ve seen enough pro riders struggling with money to know that going to college will be worth my time.  Money isn’t everything, but it’s comforting to know that I’ll have a backup plan when this pro rider jig is up.  I think I would still be in school even if I could make enough money riding my bike because I highly value what I’ve learned. 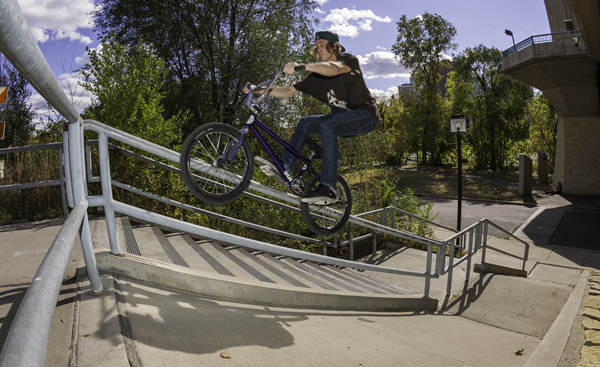 What’s something about yourself that might surprise people?
I’m happier than I look.

You are really tall. How has that affected your riding and choosing bike parts? I know you ride bigger stuff now but did you go through some pretty awkward setups to get comfortable?
I appreciate the compliment. The largest benefit I can see from my height with riding is that the average sized handrail is slightly lower than my crotch. That’s pretty self-explanatory. The main bike part choices I consider as a tall guy are the top tube length of my frame and handlebar size. For the frame I ride a BSD Forever XL, which has a 21.5” top tube. To account for the handlebar size I ride my signature BSD Giraffic bars, which have 9” rise. I wouldn’t say that I ever really struggled riding smaller parts because I just worked with what was available.  Anyone can ride any bike. Bigger parts aren’t necessary, but they do make a lot of tricks easier because there’s more space to deal with.

You physically look similar and ride a lot like David Grant; do you get that a lot?
People may confuse us due to the long hair and tall, skinny stature, but I don’t think I can compare in the steeze category. David Grant has too much swag to handle.

What’s the last song you heard, movie you watched and website you visited?
Tall Tale by Shvun Dxn, Countryman, @YouScaredStiff

Do you have any shout outs or thanks?
Of course! Thanks to my family, friends, filmers, photographers, sponsors, team managers, professors, and anyone else who has ever helped me out. There are way too many to list.

Anything else you want to say?
Live a little!