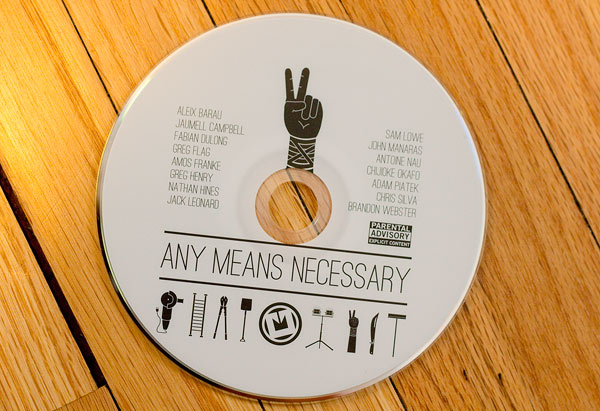 It’s always a good day when a new DVD pops up in the mail. We recently got our hands on a copy of the new “Any Means Necessary” DVD that Macneil released a few weeks back! After checking it out a few times, we figured it would be a good idea to toss together a quick review to give you guys some insight into what to expect from the video if you’re on the fence about picking it up! Let’s do this…

Going into this one, we had a pretty decent idea of what to expect from the trailer that had been online for a little while. We were familiar with the team and Zach Rampen’s filming and editing style, but we really didn’t know what the “theme” of the video would be. It was pretty clear they were going for something a little less serious and more on the entertaining side once the intro kicked off with a guy that was rocking a mullet and mustache started singing and talking shit on Brandon Webster, haha. This video features this guy between every section and it is nothing short of Canadian hilarity. It kind of reminds us of the Trailer Park Boys a little even which isn’t a bad thing.

Alright, so this video is broken down into a handful of sections with Brandon Webster kicking things off, followed up by sections from Sam Lowe and John Manaras. Then we kick over to the European mix featuring Fabian Dulong, Antoine Nau and Aleix Baru that is loaded with goodness. After that we bounce back over to Canada for Amos Franke’s section and a Canadian team mix featuring Jaumell Campbell, Greg Henry, Nathan Hines, Greg Flag, Chijioke Okafo, Jack Leonard and Adam Piatek. Then the video wraps things up with Chris Silva absolutely CRUSHING IT.

The video itself is completely street with a little bit of park action mixed in throughout the sections, but the focus is definitely on the streets. All of the guys produced some really great riding that easily keeps your attention throughout each section. I will say that Brandon Webster and Chris Silva’s sections were a personal favorite because Brandon is one of the up and comers that I think is severely under rated (you will agree after you see his part) and Chris shows you that he is still an absolute rail destroyer (pegless!). Chris has a clip from a water slide that is so unexpected and wild that you will have to rewind just to take it all in. We’ve been big fans of Chris’ for a while, but his section just helped secure that!

The filming for the video was spread out between a lot of different filmers that each of the guys work with on a pretty regular basis or just were around to hit the record button. Zach Rampen handled a good amount of the filming and was in charge of the editing process of the video. One thing that I think a good number of you will be stoked on is that this video was filmed with VX’s and edited to be SD versus wide screen. The grainy, raw feel that you VX nerds love!

Music for the video was on the chill side and had a very 70’s / early 80’s feel to it with bands like Meechy Darko, Steely Dan, DJ Premier, Regina, Sweet Charles, Curtis Mayfield, Willie Hutch and Neil Young and Crazy Horse taking care of the sound track. The song choices were a good fit for the look and feel of the video.

Overall, we enjoyed the video and with the run time just being over 30 minutes, it is an easy one to pop in before a session. If you’re looking for a video with trails or ramps, this one is not going to be your cup of tea, but if you want a less serious video packed with some great riding from the streets, we would suggest picking this one up for sure!

The video is out now and available through all shops and mail-orders that carry Macneil worldwide for FREE!

You can learn more about Macneil Bikes and their products by visiting their website — MacneilBMX.com

Check out the trailer and some of Chris’ leftover footage below!

“Silva put in serious work for his part in ‘Any Means Necessary,’ an unreal amount of work, actually. So much time spent searching for spots over the years paid off huge. This isn’t even the tip of the iceberg. Get out to your local shop and get your FREE copy of ‘Any Means Necessary’ to see all of Silva’s part and be ready for your face to melt.
Song: Jefferson Airplane- Embryonic Journey
Film: Charlie Crumlish, Chijioke Okafo, Peter Dai, Tony Neyer, George Carijutan, Chris Cadot, Aaron Jack, Chase Davidson.
Edit: Peter Almeida“