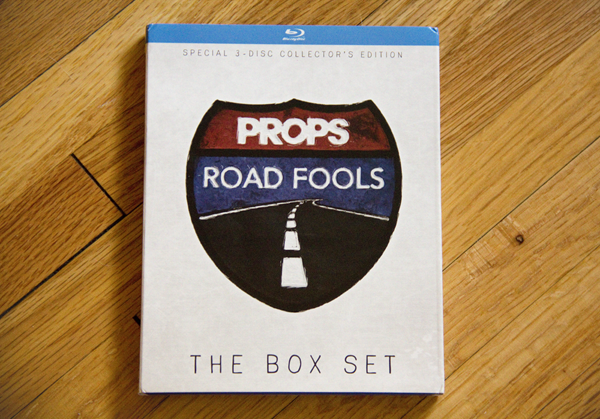 A few months ago, Chris Rye announced that he was in the process of putting together a collectors edition box set that would include all of the Road Fools videos that Props produced in its time along with some bonus footage and extra features that would help show its legendary history to the fullest. For those of you who have been riding BMX for years, you most likely have some good memories from the hours you spent watching the videos, getting stoked, remembering the lines and riding that has pushed BMX to new levels like myself.
A few weeks back, the box set was finally completed and recently released for riders from around the world to relive all of the miles that were racked up in its nearly 15 year history. I was fortunate enough to get my hands on a copy to check out and figured I would put together this review for you to check out.

When the original news came out that Props was doing this box set, I was trying to figure out just how they planned on getting all 18 Road Fools with the two Rock-N-Roll tours and Best Of videos into this box set. I almost figured they were going to be just releasing each video on its own DVD (after converting some of the original Road Fools from VHS), which would have made for a hell of a mess between the 24 DVD’s, haha.
That was all cleared up when I was talking to Chris and he explained how Blu-Ray not only allows for higher quality video (which is what I thought was all Blu-Ray did), but it also allows you to put A LOT more content on a disc. So instead of 24 individual videos, they were able to compile all of the videos, extra footage and bonus material onto 3 discs. That’s pretty impressive on its own when you consider that combined there’s over 35 hours of footage to watch.

Now I should probably mention that I haven’t had the chance to go through and watched every minute of these videos because there’s a ton to watch, but I’ve definitely put a dent in it.

The 3 discs feature all of the Road Fools from the first one that happened in 1998 almost by accident and was originally released on VHS through the 18th that was released on DVD in full-HD in 2010 along with both Rock-N-Roll Tours and the 4 Best of Road Fools videos. You can also find over 150 bonus sections throughout each disc.

Going into the videos for the first time, I was really stoked to start out in the bonus sections from Road Fools 1. Chris, with the help of a few other filmers, were able to meet up with most of the original crew of guys to do interviews about that very first trip when nobody really knew what they were about to start. The guys all talk about what it was like for them to be on the trip which is pretty crazy since guys like Joe Rich, Taj Mihelich and Robbie Morales all were just really starting to make names for themselves at the time, and are now considered some of the greats to ever be in BMX.
I’d say one of my favorite parts to this was the guys talking about what it would be like to get the whole crew back together and try to retrace their trip they did 15 years ago. I don’t want to give anything specific away, but I honestly hope this actually happens because it would probably turn out pretty crazy. 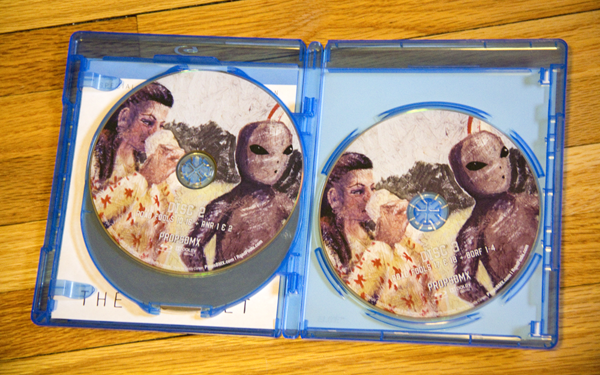 Although the focus of this whole box set is to cover the whole history of Road Fools, I feel like Road Fools 1 is the main focus for the entire project. It has been completely digitally re-mastered and edited so all of the footage and music is at its highest quality possible. I’m not sure how many of you have had the chance to see the original Road Fools on VHS, but you’re honestly going to be blown away by how good this looks in comparison to that. Even if you haven’t seen the original, I think you will still understand what I mean because it’s clearly noticeable. Plus, I think this would be an awesome history lesson for you younger guys just getting into BMX. A lot of the guys that were in the first Road Fools are still riding and have been heavily involved with shaping the industry side of BMX today.
All I know is that Chris did an incredible job with the re-master of Road Fools 1 and I can’t even begin to imagine how long that took to go through and recapture every clip and piece it all back together exactly how it was in the original video.

Another bonus feature that I had to skip ahead to right away is Robbie Morales’ X-Games fingerbike show in Road Fools 5. This 3 part, completely un-edited version runs nearly an hour and is absolutely hilarious. It’s like a roast of the BMX industry at the time, which I’m sure it might go over the top of most of the younger guys riding these days, but it’s still a must see.

To break down how this box set works, the first disc features Road Fools 1 – 9 and includes all of the bonus footage we just talked about above. Disc two features Road Fools 10 – 16 and both Rock-N-Roll tours, and disc 3 features Road Fools 17 and 18 along with all four of the Best of Road Fools. Each of these different videos have bonus features from trailers to extras from the original videos to interactive maps allowing you to select different days and even a few new additions like unseen footage Chris came across while piecing things all together. You will also find the 1080p menus have a ton of photos from the different trips which I’m assuming a good number of them will be found in the book that will be coming along in the next few months.

The entire box set is in Dolby digital audio and can be watched in 4:3 standard or 16:9 wide screen. It has also been H.264 encoded, which for those of you who haven’t done any editing, is a term that basically means that the video has been edited and exported in its highest quality form with little compression which can effect that colors and playback making for higher than original quality for the older videos. 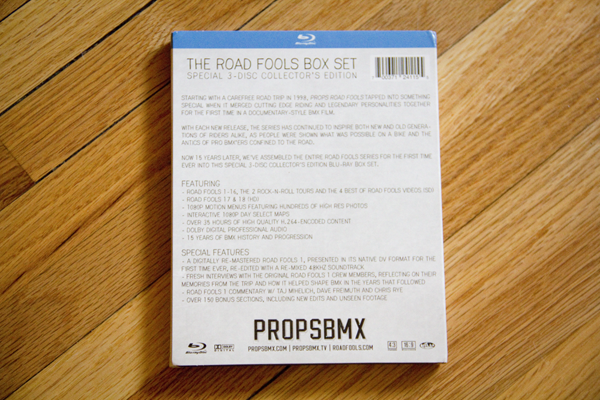 To kind of sum this mess of words up… These 3 discs contain a ton of BMX’s history which has introduced us to some of the best riders in the world and captured some of the most progressive riding in its 15 year span that has shaped the way BMX works today. I can honestly say that I feel like this is one of those must have things for any BMX rider. It’ll really show you what this sport of ours is all about and how its a lifestyle over anything else. Going through these videos, I had a ton of memories from when I was watching a lot of these for the first time come up and it really just got me stoked. It’s a good reminder of why we all ride and how it has its weird way of giving you opportunities to explore the world and meet people who all have that same passion.

Do I think you should spend the money and buy this video? Hell yeah I do. Like I said, this is something I think any BMX rider should at least see. It’s an amazing piece of BMX history and I can’t really come up with anything that is a downfall other than one thing..
The only downside to this whole box set is that it had to be on Blu-Ray versus just a regular DVD due to its size. I’m sure a ton of you have Playstation 3 or a Blu-Ray player already, but I know based on what I’ve seen on Instagram and Twitter is that a lot of us, like myself, had to go out and buy a player just to watch this. With the price of the box set and a player, it gets a little spendy, but in all honesty… It’s well worth the money!

You can pick up the box set for $79.99 on the Props website or through Dan’s Comp. Sure, the price tag is a little high, but think of it this way… You’re getting 24 videos, which equals out to being about $3.33 a video and I guarantee you it will take you a damn long time to see everything this has to offer. I’m willing to bet very few people will actually watch every single thing available to see on this video!

Don’t forget that there’s also a book coming early next year (It sounds like things have taken a little longer than planned) that’s bound to be pretty amazing as well to accompany this box set. Not sure what the exact release date is, but I’m sure it’ll be something worth picking up to go with this in the future.

Since I’m sure you’re over all this rambling I’ve just done, I’ll just suggest you hit up the Props BMX website to find out more about Props and the collectors edition box set — PropsBMX.com. Below you can find the trailer to give you a better idea of what to expect as well!