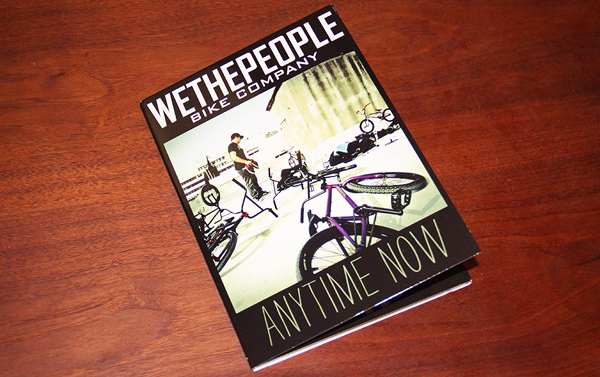 Last September at NORA Cup during Interbike, Wethepeople premiered their long awaited, injury plagued, full-length video “Anytime Now”. I happened to be there, but for some reason could only remember bits and pieces from the video. I can only imagine why? I happened to get myself a fresh copy that just became available. I also acquired a second copy that I am GIVING AWAY to you. Check out my thoughts on the video and then find out how to win yourself a copy of the video…

Wethepeople‘s newest DVD is titled “Anytime Now” for a fairly obvious reason. The video took over 2 years to finsih, with all sorts of set backs from injuries and other issues that had higher authority than the “deadline” power. Sam Lowe had stomach surgery from his bars stabbing him, then knocked his teeth out right after he got healthy, Chester Blacksmith tore his AC shoulder muscle, Mike Brennan jacked his ankle and Max Gaertig broke his ankle. If you check out the “Crashed Out” section at the bottom, you can see how these delays were caused…
However, the video did finally get wrapped up, bangers were filmed, clips were logged, the video was edited, music was cleared, and it was sent to the duplicators. After all, this is BMX and you gotta go with the flow to make things happen. 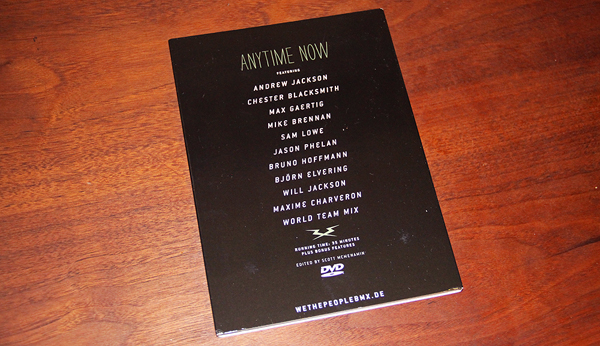 Let’s talk about the sections a little bit in order with some of the notes…
The video starts out with Andrew Jackson to the sound of the very appropriate Kriss Kross – Jump. Andrew is a shredder with plenty of pop, and this section shows it well. I’d say this definitely made for one of my favorite sections from the video.

Maxime Charveron took a different direction from the rest of the video and did a full trails section. This is rad since it adds a little flavor to the mostly street video. The dude has plenty of flow and style as well.

Sam Lowe, who I mentioned above, fought injuries the whole time filming, and still managed to come through with some real solid riding. Sam is definitely one of those underrated beasts that I’d like to see more from.

Will Jackson, who isn’t related to Andrew Jackson, follows up Sam with a fairly quick section that comes with some solid riding.

After Will comes the World Team mix. In this section you can find riding from the likes of Marcas Grubbs, Sven Gruber, Marcel Georgi, Kay Buetling, Chris Gollup, Max Anderson-Young, Greg Henry, Jan Beckman and more. The riding is good, but one clip stood out to me the most. Brian fricken Terada. Brian has one clip in the section and I’m pretty bummed there wasn’t more. That guy is so good, and does such a good job of staying out of the spotlight. Why? I wish I knew. If you are asking yourself who Brian Terada is, you need to do some Youtubing.

After the mix comes Bruno Hoffmann’s last section as a Wethepeople team rider. Near the end of the video, Bruno made the switch over to Federal, but luckily they decided to keep the section. It’s such a bummer when team changes like that happen, but it’s even worse when they scrap all the clips somebody built up because they aren’t involved with the program any longer. Big ups to Bruno and Wethepeople for keeping the section. As expected, Bruno killed it and has so much talent. You will want to check this one out for sure. It’s a banger.

Jason Phelan’s section was one of the sections I remembered from the premiere because it was filled with awesome. I became a huge fan of Jason because of this section and I think when you see it you will know why. This is a tie with Chester Blacksmith’s section for my actual favorite section of the video.

Max Gaertig’s section is pretty wild. I’m sure you may have seen some of the clips from this in photos. I know the backwards feeble to smith to cab whip out was a print ad not too long ago. I’m going to just ask, how the hell does Max do cab whips so good? That’s not all he does in the section, but there’s probably 8 or so that are just wild. Dude has some moves on lock.

Oli Landgraf from the world team also stacked enough clips for a full section. Oliver’s name was new to me, so that was pretty cool. I’d like to see some more of him in the future.

Mike Brennan goes hard in his section. Plenty of tall man status stunts that he makes look way too easy. Mike didn’t mess up his ankle until the end of filming and I’m stoked about that since he pulled together some real good stuff for his section.

The final section goes to Chester Blacksmith for obvious reasons. All I can say is OH MY GOD. Chester does some seriously huge stuff and I’m amazed he didn’t get broke off worse than his shoulder injury. It’s obvious he put a lot of effort into this one and it paid off. I probably said “holy shit” about 10 times in the process of his section. Damn.

That’s just a quick run through of each section. I just know how some people get all worked up when I give away a little too much info, so I figured short and sweet will do the trick. 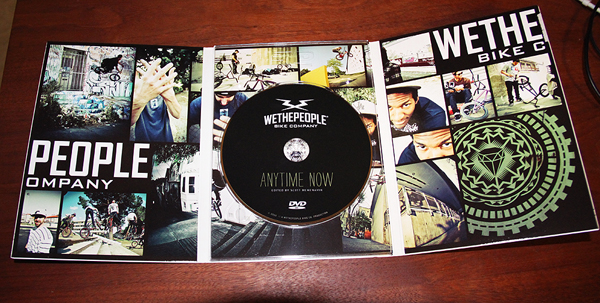 The editing and majority of the filming was handled by Scott McMenamin along with contributions from a bunch of others. The filming wasn’t on a Joe Simon level, but it was still clean and on point. There aren’t too many sketchy/shaky clips and the editing is real clean. No over the top graphics or extended intros. That’s the way I like it.

The video runs about 40 minutes without the bonus features of “Bonus” clips and “Accidents Happen”.

Overall, the video would be a good one for the collection. I was real into Chester, Bruno and Jason’s sections the most personally, but that doesn’t mean the rest of the video was bad. I just feel like these guys really dropped the hammer for it. I’d definitely suggest at least checking the video out once because you need to see Chester’s section.

The video is available now and can be picked up through any shop that carries Wethepeople products, or on Dan’s Comp ($17.99). None of the other mailorders have it yet, but I’d imagine they will have it soon enough.

You can WIN a copy of the dvd right now by leaving your name and “I want Anytime Now” in the comments. Please leave your valid email so I can get ahold of you if I pick you as the winner. One entry per person. I’ll pick the winner next saturday! (March 26th!) U.S and Canadian residents only.