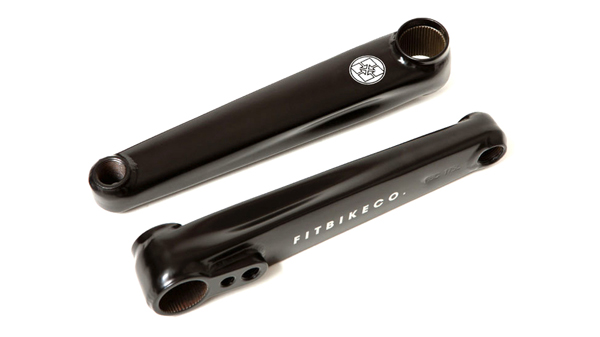 BMX cranks are one of the most important parts on your bike. Not only because they allow you to pedal, which is key, but they are where a lot of the force from impacts end up when you land. Cranks have gone from one-piece designs that you could bend by just starring at them to traditional 3-piece style we see today. You can’t forget the 2-piece and 2.5-piece versions that have surfaced over the years as well. Either way, there are a lot of things that have been done to improve the quality of cranks to hold up the the level or riding that goes on these days from dropping off roofs, sending it over 30 foot doubles to blasting a box jump or grinding down a rail.
About two years ago, Fit Bike Co. introduced their 19mm Indent cranks which utilized the 3-piece design with a 19mm, 48-spline spindle and indents on the arms to improve strength. The cranks are clean and built to stand up to some heavy riding… Except they there were ways to get an even stronger design. Recently, Fit released another version of the cranks that feature a larger 24mm spindle that ultimately makes for a stronger design without excessive weight additions to your bike.
I was pretty curious what lead them to stepping outside the box so to speak from the traditional 19mm and 22mm spindle designs, so I got ahold of Chris Moeller to talk a little bit about what lead to the design. Let’s take a closer look! 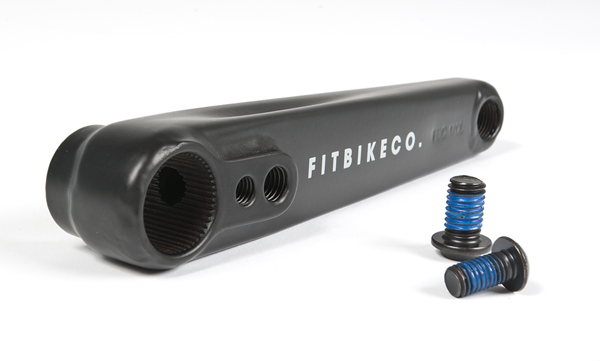 The arms feature two bolt holes to help fit all sizes of sprockets.

These cranks start out with some heat-treated 4130 chromoly arms which have the concaved (Indented) sides which help to increase the strength of the arm and helps to resist denting. You can find the oversized 24mm, 48-splined hollow chromoly spindle which, thanks to it’s larger diameter, increases stiffness and prevents twisting which are held tight with some hollow chromoly bolts. The 24mm Indents are available in 165mm, 170mm and 175mm arm lengths with a weight of 30.85 oz. without the bottom bracket (175mm / The 19mm version weighs in at 29.15 oz.) and color options of black, matte white and chrome. Since the 24mm bottom bracket isn’t a standard size in BMX and these are the only BMX cranks that utilize the size, Fit include a bottom bracket and all the spacers needed to get you dialed in. Both arms have sprocket bosses so these cranks are left and right side compatible.

Since I had a bunch of questions about why Fit chose to do things this way versus the traditional side, I hit Chris Moeller with a few quick questions to clarify things. This is what he had to say…

Was doing a 24mm version something you originally wanted to do with the cranks but ended up doing the 19mm version first? Were there any other sizes you thought about giving a shot?
19mm is such a standard size we just started with that. The advantages of 24mm were pretty clear once we started kicking the idea around.

The classic 19mm and 22mm spindles have been the “BMX standard” so to speak for 10+ years. What are some of the reasons and advantages of going the 24mm route?
Stronger spindle without added weight. 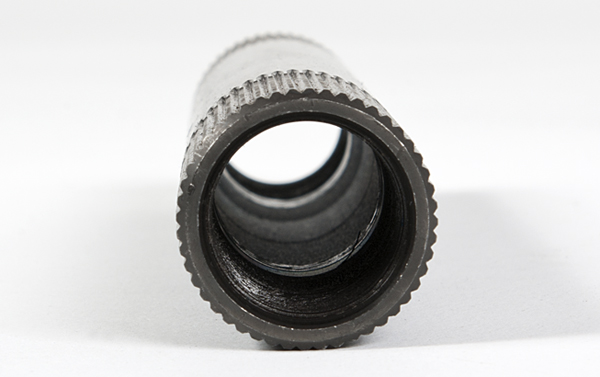 What were some of the issues you ran into doing the 24mm over 22mm for example?
Getting the bearing made was the largest hurdle.

With the bigger spindle, I’m assuming the arms had to be expanded a little bit to fit the wrap around design the 19mm also uses. Were there any really big changes from a design stand point that had to be addressed creating these beasts?
The INDENT arms work great on the 24mm versions. The main challenge was using the extra size instead of the wall thickness to get the strength without adding weight.

Did you guys think about trying different styles of spindle bosses or was the 48-spline something you figured worked and wasn’t worth messing with?
The smaller splines of a 48 splined design keep the spindle from having a shear point at the base of the splines. For now it’s the best interface for freestyle in our opinion.

Are you guys producing these cranks in house? How long did it take to go from idea to having physical samples to test?
No we are not. With frames, forks, bars, stems and sprockets being made by us right now, we don’t have the man power to make cranks. It took about 6 months to get samples and we tested for about a year before we released the final version.

They’ve been out for a little while now. How has the reaction been so far? I’d assume these are pretty popular with street guys that have a habit of bending cranks?
This is the only crank our team riders are using right now.

If a rider was looking at a set of 19mm Indents and a set of 24mm Indent cranks and couldn’t decide which ones were right for them, what would be the first question you would ask to decide?
Are you hard on cranks? If so, get the 24mm. The 19mm cranks are more traditional and classic looking if you’re into that. Plus you can use old hardware on the 19mm.

These cranks are available now. Who should shops and distributors get ahold of to get some ordered up?
The Building Distribution. TheBuildingDistro.com or (714) 835-3400

How much are these guys retailing for?
MSRP is $ 169.99 and that includes the whole BB. You can pick them up through Dan’s Comp, Empire BMX and Albe’s online here in the U.S for example or you can just have your local shop get ahold of us through The Building Distribution to get some ordered. 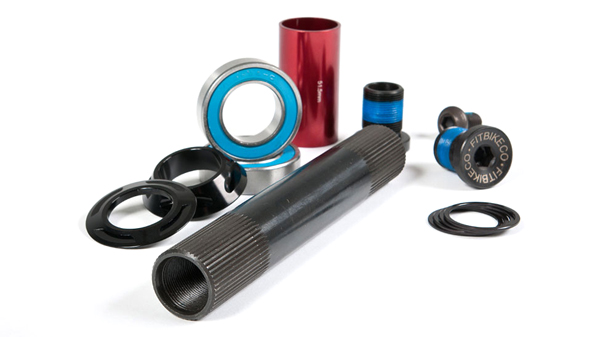 I think we’ve pretty much covered everything with the cranks. I gotta ask… With Interbike coming up, can you give us any hints at some of the new stuff you’re working on for Fit?
We’ll have the new T/A (Traction Advantage) tires, 2.4 FAF tires, MAC PC pedals, 24mm spline drive KEY and KEY GUARD sprockets, and a new AITKEN frame.

Speaking of new things… How’s that DVD coming along?
Really good! We might have a trailer playing at our booth at Interbike.

Hell yeah! Anything I missed you want to say?
F-IT!

So that pretty much wraps this up! If you’re in the market for some new cranks and you’re looking for something that’s going to hold up to heavier abuse than most 19mm and 22mm cranks, the 24mm Indent cranks are definitely an option that is worth looking into!

You can find out more about Fit Bike Co. and their products by visiting their website — FitBikeCo.com.

Check out more of our Originals by Clicking Here or check out all of the latest videos, news, products and more by hitting the Daily Section.

Take a look at some of the team putting these cranks to the test!

You are here: Home / blog / Insight: Fit – 24mm Indent Cranks
Note: This site contains affiliate links and we could recieve a small comission that supports this site if you were to make a purchase on their websites using our links.