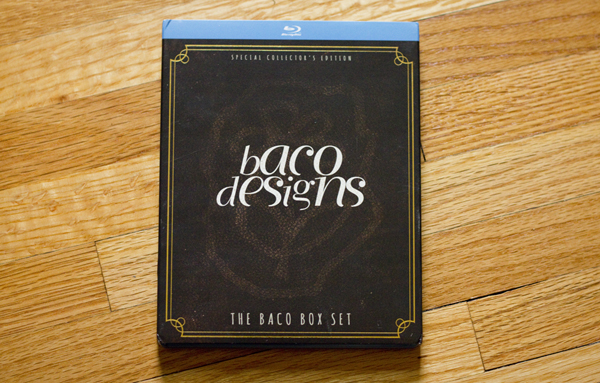 Over the years, there have been a lot of videos that have come out that got us excited, but only a few that you know are going to be legendary before it’s even done. When word that there was a documentary and a box set in the works for the legendary Baco series, we knew that it was going to be one of those videos that everyone needed to see and it was going to be on that legendary level.
Over the past year or so, Chris Rye, along with the help of a handful of others, took on the job of compiling over 25 years of footage that literally spans a group of peoples lives for a quarter of a century and jamming it all into one Blu-Ray Disc. Now, in short, that sounds a lot easier than it really was, but in actuality it required what I’d imagine to be a few thousand hours, a lot of patience and probably a few stiff drinks to dig through hundreds of hours of VHS footage, DV tapes and digital footage that was all converted and pieced together into this video. Some how, things all came together, much like most of the Baco videos, and today we have a box set that contains all 10 Baco videos, a full documentary and hours of bonus features…

There are not a lot of times where I don’t know exactly where to start, but this is one of those times because of just how extensive this really is. When I look at the history of Baco and how it all started, it kind of blows my mind because it all started in 1988, the same year I was born. Now, that really has nothing to do with it, but for me, the fact that these guys have been doing this my whole life is pretty crazy.

When you look at the history of Baco as a whole, it starts out with a few friends, Chad DeGroot and Chris Rye, who decided they wanted to document the riding and shit they were getting into with their friends on a few small ramps they built in a driveway and over time shows how they have made their way around the world because of it. Over the course of 10 videos, the lives of the entire crew that were brought together by BMX documented them pushing each other to different extremes on and off the bike, experiencing different places, meeting different people and just taking advantage of what they had at the time. Although a lot of things these guys have done were for entertainment value, the core of this is that it unintentionally documented these guys growing up in their own way and doing things on their own terms and not by some set rule book.

The other way to look at it would be that because of the videos, these guys changed the way riders looked at BMX and pushed it into directions that, had they not been there to document it, may have never happened. Whether those “directions” are good or bad, it happened and there’s a lot of proof of it having influence. It’s also interesting to watch these videos and see how many people that were involved over time that have created careers in BMX for themselves on and off the bikes. These videos feature a lot of guys who went on to be (or are still) professional riders, started brands making products you ride today, shoot the photos and videos you see or even created things like magazines some of you still read today.
Not to say that Baco created these things, but a lot of these guys came together around the same time and it shows just how influential this era was for BMX today. 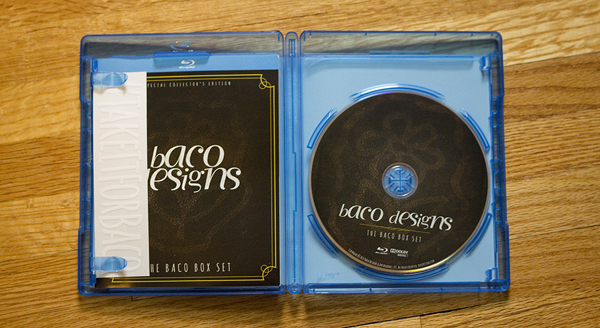 I could go on and on about the importance of the Baco series and how good every video is in its own unique way, but I think there’s a good chance that most of you who are reading this have seen at least some of the Baco videos and know what you’re getting yourself into. So I’ll try and sum the series in a fairly short paragraph for those of you who don’t know. These videos start out with a pretty small group of riders from the middle of Wisconsin with bikes and a video camera. The filming is rough, the editing was nothing like its done today and there wasn’t really a set plan of how the video was going to come together beyond just putting together what they had into a video. As the videos went on, the core Baco crew grew, the level of riding got crazier, the antics were pushed to insane levels and the film work got better and better. Further more, some of the original guys became professional riders, others burned out and faded off to make a living doing something else, a lot of miles were clocked, footage from all over the world was collected, the list of influential riders who made appearances in the videos grew, houses were destroyed, TV shows were hoaxed, A LOT of booze was consumed and I’m sure nobody knows how many girls took a walk of shame after a night partying with these guys.

There is a lot of ground covered and each video is better than the next from a riding and entertainment value and they have packed it all into one disc. In the box set you get…

The video also features hours extras like the uncut version of Chad DeGroot and Mark Hilson on the Jerry Springer Show, the Baco-A-Go-Go jam this past summer, bonus footage that has never been seen before, a HIDDEN full-length Easter egg video that was only ever released on VHS, a photo section, the “Do A Little Walk” music video and more.

Combined, this one video has around 15 hours of footage crammed into it spanning all the years of Baco.

Oh, and it also comes with a 20 page booklet with photos and words about the history that’s a good read and a #TakeItForBaco sticker! 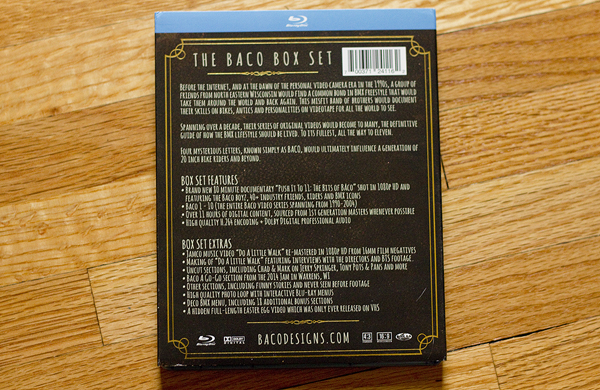 I’m sure a lot of you are wondering why or are bummed this video is on Blu-Ray only, but it’s simply because it would require multiple DVD’s to fit all of this and the quality is higher. The price is higher and if you don’t have a Blu-Ray player you have to find one to use or buy one, but ultimately you’re still saving a ton of money since I can imagine buying each of these videos (if that was possible) individually would be a hell of a lot more expensive. If you want to know the history or just want to re-live it all again, it’s worth every penny and I personally highly recommend everyone checks it out! Huge shout out to Chris Rye for all of his work and the entire Baco crew for kicking so much ass all these years. You did it right!

Overall, this was a pretty short write up, but trying to go into detail about all these videos would take forever. Just trust that you will not be disappointed by this one.

The box set is available for $69.99 on Dan’s Comp or through the Baco Designs Website. Also all good BMX shops should know how to get you a copy, so if you prefer that route hit them up today!

You can find out more about Baco and the box set by visiting their website — BacoDesigns.com

VISIT: FRONT PAGE // DAILY SECTION // BMX COLOR APP // BMX VIDEOS
You are here: Home / Reviews / Insight: The BACO Box Set
Note: This site contains affiliate links and we could receive a small commission that supports this site if you were to make a purchase on their websites using our links for no extra charge to you.