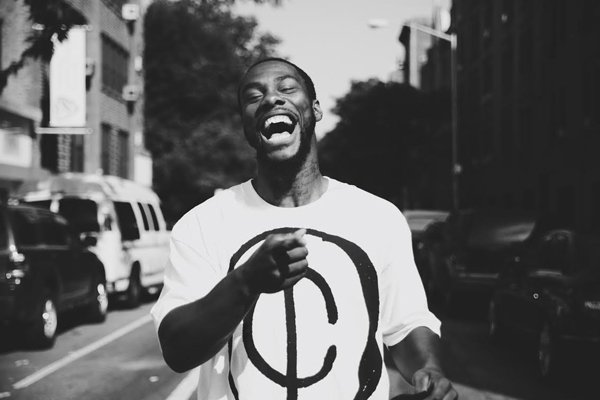 I don’t remember exactly how I ever came to know Tafari Smith, but it’s been a few years and in that time I’ve realized he’s a rider that not only throws it down on the streets of New York, but he carries one hell of a positive attitude and hustles hard to be his best. Every time I’ve come in contact with him he has been hyped and just happy to be riding on two wheels. After all this time, we decided it was time to introduce you guys to T so you can get to know just who this guy is a little better! Let’s take a look and see just what this guy is all about! 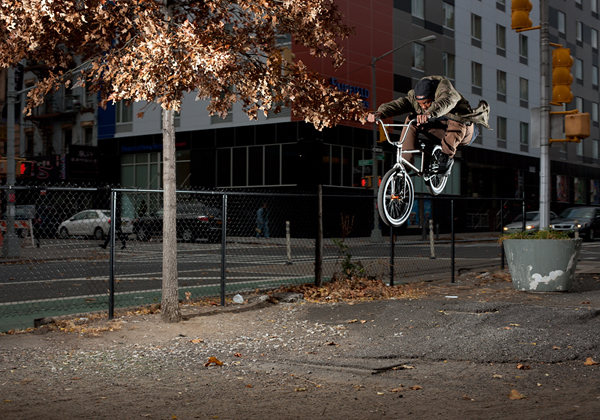 What’s up Tafari! How are things going on your end? Sounds like it has been a busy past few weeks out in New York.
What’s going on! Been busy wrapping up some footage, you know the saying “ride, film, repeat” deal. Yeah, well yeah, I’ve been doing that while trying to heal. It doesn’t really go “hand in hand”, haha. I’ve had jammed fingers to torn knees. It’s all a part of the game, but I’m just happy to be playing it. This past winter has definitely been one of the longest! So to see the temperature rise and the sun shine has me in great spirits.

What was it that first got you into BMX? Any early memories of what made you want to ride come to mind?
A friend gave me one of his spare bikes, if I recall correctly it was an all black Gary Fisher with chrome triple walls. Long story short, we rode all night downtown and when I returned home that morning, I knew that BMX was what I wanted to do. An early influence on me wanting to BMX today would definitely be the X-Games and the legends Mat Hoffman and Dave Mirra. I recall as a kid pedaling around on my Royce Union, I stumbled across a senior citizen apartment complex. It was at this complex (nick named “Transfer”) where BMX became real to me. There were a lot of older BMX riders there and man were they good!

Actually, how were those NYC jams that went down the other weekend? Seems like there was a massive turn out.
The Cult jam had a really great turnout and a good time is always expected whenever Robbie’s in town. The DUB street series also had their final stop here in N.Y. and you couldn’t of wished for a better gathering than that. Man, it felt as if there were a thousand bike riders in the city that day. That event was a very good look for the city and I’m so glad it was able to take place. I thank everyone who had a role in that coming together. I don’t think there was ever a jam that big in New York and I’m really happy for being able to share that experience with everyone in attendance. This is New York’s season and I’m excited to see what other events will pop up next. 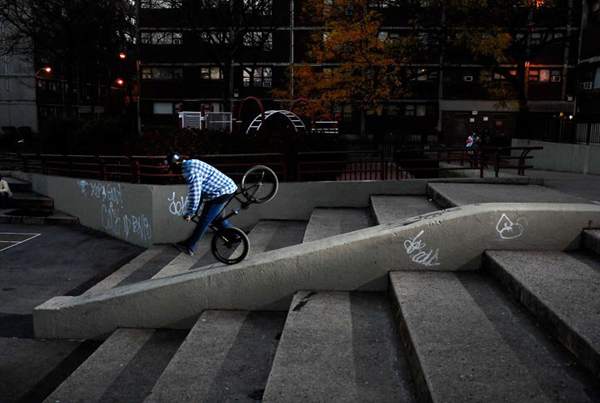 So you call New York City home and I’d imagine it’s a hell of a place to live. What’s the scene like there these days?
The scene has definitely grown within the past five years. Yeah, New York is the home of the “hustle and bustle” but also the heart of some really talented bike riders. Although the the police are rough on us, the city has given recognition to the sport as a whole and we’ve gotten a few new street plazas over the last year because of this. There’s always a new face with seventeen stickers on their bike asking for tips on manuals but that’s what broadening the horizon is all about.

I know you spent a lot of time at the Brooklyn Banks, right? What has it been like since that spot got shut down? Aren’t they getting close to opening it back up?
For sure, the banks going under construction was really weird at first because that spot has been so profound, it was literally New York’s action sports landmark but it was only a minor set back for a major come back. In time we ended up getting a re-vamped “L.E.S.” skatepark, new skate plazas, along with the promise of the “Banks” re-opening in 2014, so hopefully the bridge construction is complete before it gets too cold out.

There’s what seems to be endless territories to ride over there. Where have you been spending most of your time these days?
I usually try to take advantage of the abundance of spots NYC has to offer! I live about an hour away from the city and that’s depending on how the trains are running. I’m usually at this pre-fab park about twenty minutes from where I live. This park has one hubba, a bank and one grind box but it’s been my bread and butter over the years, so I can’t complain.

What are your plans for the summer now that temps are heating up and the sun is sticking around longer?
Simply more family time, wife time and bicycle time.

I know you have been filming for a few different projects, right? Care to talk a little bit about what we can expect to see from you here in the near future?
Yup, you can just expect to see me! Nothing fancy and nothing sugar coated, just simply T.

How do you feel about filming? Is it something that motivates you?
Personally, I love filming, I feel it’s a way for the world to get to know who I am. Filming definitely motivates me because I love progression, so recording something that I couldn’t land last year feels really good, then to play it back and see that it actually looks good is extremely rewarding.

Actually, what is it about BMX that keeps you so happy? Do you ever find yourself getting burned out?
The feeling of freedom and adventure make me smile! Art, creativity and individuality are a few things that drive me. I’m a “type-A” personality so being burned out is a feeling I’m accustomed to, my wife is always telling me to slow down. When I’m feeling that way I usually just sit at home, recharge for a few days and eat everything in the house while doing so, haha. I love BMX.

Who are some of the riders that really influence and motivate you?
Seth Kimbrough, Aaron Ross, Nigel Sylvester, Chase Dehart, Ben Hittle, Big James, Brad Simms etc. There are way to many good dudes to name, the whole game has motivated me and influenced who I am. There’s so much talent in bmx and being that I’m such a fan of the sport I greatly appreciate all the riders who have done it and those who are still doing it. 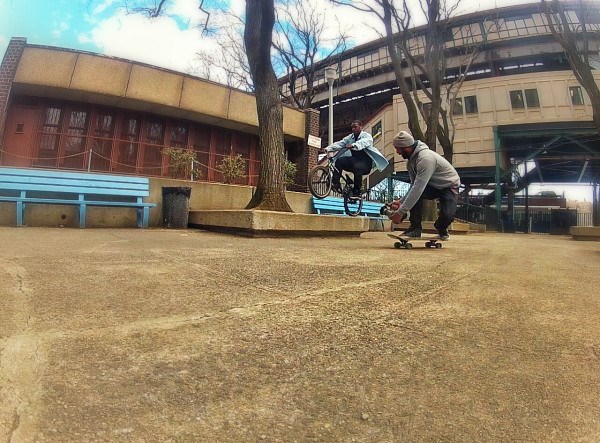 What are you getting into these days when you aren’t riding? Any hobbies or jobs or anything like that keeping you busy?
If I’m not on the bicycle I’m with my wife kicking back and watching all of our favorite t.v. shows. If I’m not with her, I’m playing Call Of Duty or on Youtube watching random videos.

You actually went to school for automotive and diesel technology, right? What made you want to go into something like that?
Yes, I did, my grandfather played a huge role in that decision. I remember being in his shop as a kid and watching him turn wrecked vehicles into masterpieces. He was an auto body/collision expert.

Do you plan on ever using the education and working in the field or is it just there in case all hell breaks loose?
I firmly believe in back up plans. When it comes to sports, you can never be too sure. Never leave all of your eggs in on basket and never walk this earth without an education.

It sounds like you have a lot of support from your wife when it comes to BMX. How good is it to have that support? Seems like most people don’t have that going for them, haha.
Support of any kind is awesome but to have someone you could call your own in your corner is a beautiful thing. Having someone who could understand long hours, injuries and the business side of BMX, all the while juggling college papers is truly a blessing and I’m thankful for that. Something that many men long for, but the key is not to try and force it to happen because if it’s meant to be it’ll be.

Where do you see yourself in the next 5 years? Any goals or plans of what you want to accomplish?
In the next five years I see myself healthy and still pedaling like the first day I started. I would love to reach the youth of america through BMX and show them that there is more to life than what it is seen on television. I wanna show them that although your environment may mold you it doesn’t define who you are and what you are able to become if you believe in yourself.

What’s something about yourself that might surprise people?
Although I look really serious I have a huge sense of humor, I love a good laugh, haha! 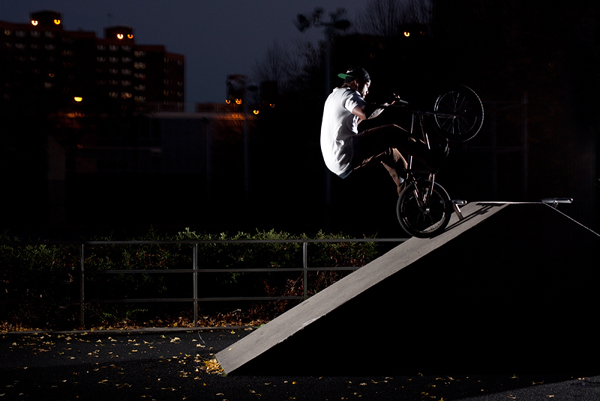 Do you have any shout outs or thanks? I’d Love to Thank God, My wife, Robbie Morales, Lil’ Mikey and fam, Dean at L.I.B., Shawn Garrett, Brad Simms, Big James, Ralphy Ramos, Aaron Ross, Nigel Sylvester, Brice E-Knows, Scott Marceau, Launch Pad, Kurt Hohberger, My Bx crew! and NEW YORK as a whole for making me who I am.

Anything else you want to say?
I started riding at 21 years old and I’m now 27, always believe in yourself! Because people only have as much power as you give them.