This is pretty badass. If you like BMX and motorcycles, this video featuring Arthur Dietrich is one you will be stoked on. Arthur recently took a trip between France and Spain where he cruised on a Harley Davidson Fat Bob hitting up skateparks and street spots along the way. This looks like it was a badass trip to us!

“Burning Wheels a trip to Harley-Davidson through France via Spain. An adventure to discover in images, combining the thrill ride with Arthur Dietrich and BMX riding a Fat Bob® Dyna® customized by ATS Harley-Davidson Paris Bastille.
Director: WTF Agency”

END_OF_DOCUMENT_TOKEN_TO_BE_REPLACED

“Here is this fourth episode of “Catch us if you can” that took place in Mexico with Arthur Dietrich & JC Pieri.
This episode of ‘Catch us if you can’ was perfect to film because the level of Mexican riders is really awesome and were super nice people! They went in two Mexican cities which are Mexico DF and Guadalajara. They rode bowl and street, ateTacos all day… Classic trip to Mexico

Stay tuned for the last episode in New York

The third epsiode from JC Pieri and Arthur Dietrich’s world tour “Catch Us If You Can” brought them to sunny Hawaii! This video is as dialed as the last two with some incredible sights, awesome riding and some dialed filming and editing. After you check out the video, make sure you check out this interview we did with JC about “Catch Us If You Can”!

“Here is the third episode of “Catch us if you can” that took place in Hawaii, USA, with Arthur Dietrich & JC Pieri. Subscribe here for daily X-Treme Videos: http://www.youtube.com/subscription_c…

In this third episod of ‘Catch us if you can’ . We were in two Hawaiian island which are Ohau and Kauai. We rode bowl and street and trust us Hawaii is better than paradise itself!

Stay tuned for the next episode in Mexico

XTreme Video features awesome extreme sports all over the world!” 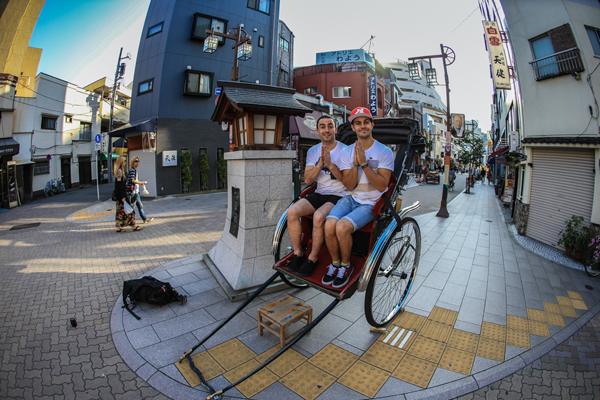 I think in every BMX riders lifetime, they think about doing one massive trip all around the world where they bounce from country to country checking out the spots and really experiencing what the world has to offer. The opportunity only comes for a few lucky ones, while the rest of us are stuck dreaming about how we can make it a reality.
Recently, JC Pieri and Arthur Dietrich worked out a way to make their dream of traveling and experiencing the world a reality. With their bikes, a bunch of cameras and the support of some awesome sponsors, they’re on a 50 day trip around the world experiencing a handful of locations that any BMX rider would love to go to!
We were super interested in what they had going on, so we decided to catch up with JC Pieri and find out just what this project is all about. This is what he had to say!

END_OF_DOCUMENT_TOKEN_TO_BE_REPLACED

The next stop for JC Pieri and Arthur Dietrich for their “Catch Us If You Can” world tour was Tokyo, Japan! This video gives you a look at what they experienced and the riding they got into while they were there. This city is absolutely mind blowing from all of the people to the crazy architecture and everything. Take a look! Absolute MUST SEE!

Filmed and edited by JC Pieri

A few weeks back I saw that JC Pieri and his friend, Arthur Dietrich were setting off on a world tour where they would be visiting locations all around the world. I didn’t think they would be producing videos from the trip already, but it would appear that I was wrong. Check out this AMAZING video from their first stop in Shanghai, China. This one will have your eyes locked until it’s over!

“Here is the first episode of “Catch us if you can”, BMX world tour, with Arthur Dietrich & JC Pieri. Subscribe here for daily X-Treme Videos: http://www.youtube.com/subscription_c…

It’s a world tour project that aim to discover new playground all around the world! In this first episode we are in Shanghai, China. We rode the biggest skatepark in the world, as well as great street spots but we also visit awesome places such as the Old Shanghai, Pudong business center and much More!

Stay tuned for the next episode !!