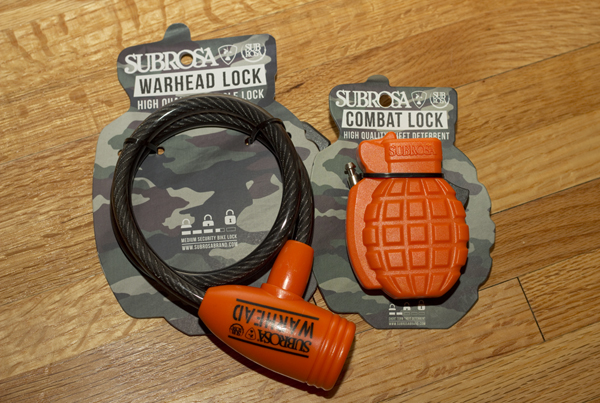 I think we’ve all been there before where we need to set the bike down for a few minutes to run into the gas station or Taco Bell to get some drinks and food and didn’t have a lock, just hoping you won’t come out and have your bike missing. It doesn’t take more than a couple of seconds for somebody to grab your bike and take off before you realize that your pride and joy just got jacked. I mean, let’s be real… Bikes are expensive and it’s never a bad idea to invest in something that’s going to keep it from being damaged or stolen. Just like you put a hub guard on to keep you from wrecking your hub when you grind, tossing a lock on your bike could be the difference between being robbed or having somebody think twice before they try.

The guys at Subrosa have been working on their war on theft for a little while now, but we have never really taken that in-depth of a look at what they have to offer in the ant-theft department. We recently got our hands on their Combat and Warhead locks and figured it would be a good time to talk a little bit about just what makes these guys so important. Let’s do this!