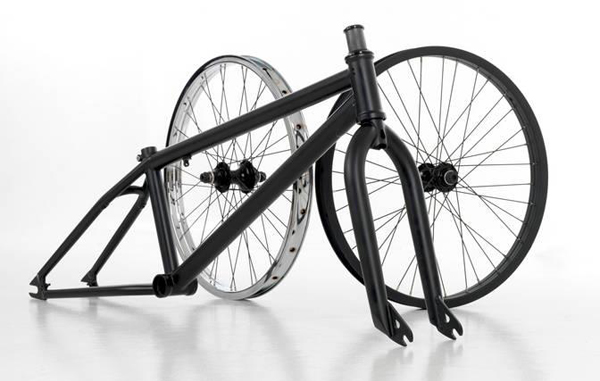 That’s a pretty bloody big question right off the bat. But it’s worth thinking about for sure – the recent addition to S&M Bikes’ product line is a Holmes frame and fork kit which is sized for 22-inch wheels, alongside a new wheel kit from Revenge, with suitable sized rims and tyres. So, if it’s good enough for S&M, is it good enough for everyone?
With this in mind we approached to Keith Easom at Faction Bikes; Keith and his brothers raised the 22-inch wheel question a long, long time ago and, convinced that they had something worth pursuing, set about creating a bike company that only made bikes with this wheel size – which is definitely a very bold move for Keith and his brothers. They put their money where their mouths were, and have spent considerable time and money investing in this concept.
But, does it work? Keith and co have done tons of research, and have gone through all the feedback from people who have bought and rode their prototype bikes – so they know what they’re talking about. They’ve used extensive feedback and testing to fine-tune their latest bikes, and these things are looking good. Apparently, compared to a standard BMX bike the 22-inch bikes are faster, more stable, yet at the same time lose none of the flickability and agility we all know and love. The 20-inch wheel size is a throwback from the birth of BMX and the old Stingray-type bikes. Maybe, just maybe, is it time for a rethink?