Here’s an interesting BMX video giving you some insight into what it took to make the Paradise BMX Park in Barcelona, Spain come to reality. This has insight from a few pros, family members and the three guys behind the whole project; Nil Soler, Jaume Sala and Roger Soler. This video is in Spanish, but they have put in sub-titles in English for your viewing pleasure. Take a look!

““Paradise” talks about the story of Jaume, Roger and Nil building its own BMX park in Igualada (Barcelona).
Directed and produced by Jop Closa & PeteroftheSpoon.
Interviewer Imar Martínez.
Translation by Bàrbara Montes and Marta Cabeza.”

END_OF_DOCUMENT_TOKEN_TO_BE_REPLACED 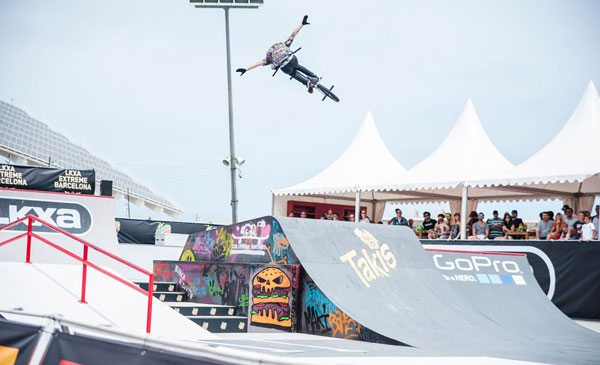 Last weekend the LKXA Extreme Barcelona BMX contest went down over in Spain! There was a massive course that was designed to cater to park riders, street riders and the flatland guys. Our friend and photographer, Ruben Vigil, made his way to the contest and ended up catching some amazing photos of guys like Jason Phelan, Daniel Penafiel, Matthias Dandois, Viki Gomez, Jimmy Van Belle, Nil Soler, Inaki Mazza, Alessandro Barberro, Mati Laisgoty, Jonathan Comacho, Catfish and more! Check out all of the photos by hitting the link below!

Check out the FULL photogallery here!

Here’s a BMX video we have been waiting to see since the trailer dropped the other day! A little while back the Mankind team made their way to Seville, Spain to see just what the city had to offer. They ended up coming across a ton of amazing spots and with a crew like this, you know they didn’t let it go to waste! Check out this MUST SEE video they put together from the trip. Everything from the riding to the spots to the filming and editing make this one a great watch.

“The Mankind Bike Co. europe team has spent two weeks in Seville and experienced there a memorable time. We would like to say thank you again too all the nice people, who have made this project possible and made it such a really special time for us. Enjoy Daniel Tünte, Kim Moreno, Daniel Juchatz, Nil Soler, Billy Cooper and Isaac Lesser
in All the way Seville.
Video and photo production: 20ZollMedia.com
Camera and editing: Björn “Bommel” Mager
Photographer and drone: Hans Friedrich
Music: 1st – Beatsteaks – Hail to the Freaks | 2nd – Beatsteaks – Summer”

Some of the Mankind crew were in attendance during the Highway to Hill contest at Mellowpark last weekend in Berlin, Germany! This video gives you a look at the riding they got into along with a little party action. Definitely well worth checking out!

“The Mankind crew came together at the Highway to Hill contest in Berlin last weekend to have a great time with lot`s of riding, hanging out and enjoying the awesome weather and nightlife. Along with the german dudes Daniel Tünte, Kim Moreno and Daniel Juchatz, we also had Nil Soler from Barcelona as a special guest. Daniel Tünte unfortunately hurt his finger on Friday so he couldn`t ride, hope he get`s well soon. All the other guys made this weekend a busy one for TM Björn Mager as he was
running around constantly gathering footage with them and also being there host for their place to stay. Good time were had for sure as you can see here, enjoy!”

END_OF_DOCUMENT_TOKEN_TO_BE_REPLACED

Mankind have added Nil Soler to their team in Spain! Check out his welcome edit that is loaded with park and street clips giving you a clear idea as to why!

“We would like to welcome Nil Soler to the Mankind Bike Co. crew as our new Spanish team rider. Nil already got his new machine, which is a Mankind Monocle Frame 21.0″ in matt black. Mankind is available in Spain through our good friends at 360 Bicycles in Barcelona.”

Nil Soler has been added to the Mankind team. Check out this quick video of him building up a new bike, then get a closer look with a few photos right here.

Check out this real good edit of Nil Soler getting it done at the skatepark and on the streets around Barcelona.