I spotted Charlie Crumlish filming during the photos and other video that popped up from the FBM Post Apocolympics and figured there would be another edit from EPSN out of the deal. Charlie did a real good job with this so check it out!

“In 2002, Steve Crandall and the FBM BMX crew were producing bikes in the basement of a skatepark in Johnson City, N.Y. when the idea for the “Ghetto Street Jam” was born. The area surrounding the building they were housed in was a mess of post-industrial, rust belt waste, with no future prospects. It was also, not exactly rideable.

The FBM crew decided to apply a haphazard “ghetto” approach to the street jam obstacles. Starting with a car, they gathered scrap wood, various work shop debris and spread the word. And sure enough, the first Ghetto Street Jam delivered. On a patch of loose dirt and gravel, in a field next to FBM lit up by headlights from cars, T-1’s Garrett Byrnes wallrode the wall above the door to FBM’s machine shop and a legacy was born.

The Ghetto Street Jam returned for two more years, with twice as many people, a loop made of pallets, a dumpster that doubled as a box jump and a rideable Penske van. Rob Tibbs landed a 900 in a bowl made from scrap wood, Steven Hamilton won a mini motorcycle, and Jim Cielencki got the loop done. And then, before it got too played out, FBM killed the Ghetto Street Jams.

But they had created a golden moment in BMX.

Last week, Steve Crandall and the FBM crew brought the spirit of the Ghetto Street Jams back to upstate New York. With the help of Derek Nelson’s indoor/outdoor park known as HCS, FBM threw a jam called the “Post-Apocolympics,” which included a new obstacle shaped like a gigantic slice of pizza standing up at an angle. It may not have featured Kevin Porter and Leland Thurman announcing, or Chris Moeller trying to drive a rental car through the street course, but it did feature some amazing riding, and it also reminded me that FBM is much more than just an American-made bike company — they make BMX happen on their own terms.

FBM put together a few clips of the legend known as Kelly Baker getting down at the Post Apocolympics. I don’t know about you, but there’s definitely no shits given to take it that many times for a clip. 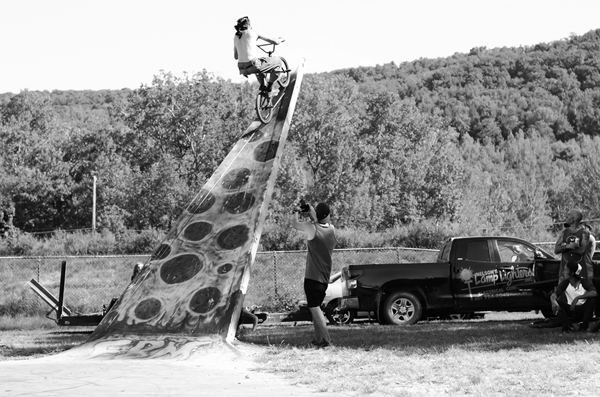 This past weekend, FBM invaded Derek Nelson’s compound to throw a jam in true FBM fashion with a lot of beer, pizza, BMX, good people and good times. There was no doubt in anyones mind that this was going to be anything but a good time. We were lucky enough to have our friend, Nick Jones, there to take it all in with his camera. We’ve got 29 photos from the day for you to check out to either remember what the hell actually happened after you blacked out or if you weren’t lucky enough to be there to see some of what went down. First, here’s a couple words from Nick….

“The first FBM Post Apocolympics went down Saturday in Vestal, NY and it was one of the best weekends I’ve had all summer. Watching Jack Hartje jump over the entire satellite and then try to 360 it was defiantly a highlight as well as the bunny hop contest on Derek Nelson’s five thousand pound bike from Road Fools 13. I also saw Crandall get naked for a big boobs contest later that night at tent city. Good times and good people sums it all up. Shout out to Derek Nelson, Steve Crandall, and everyone else that made this jam possible.” – Nick Jones

CHECK OUT THE PHOTOGALLERY RIGHT HERE