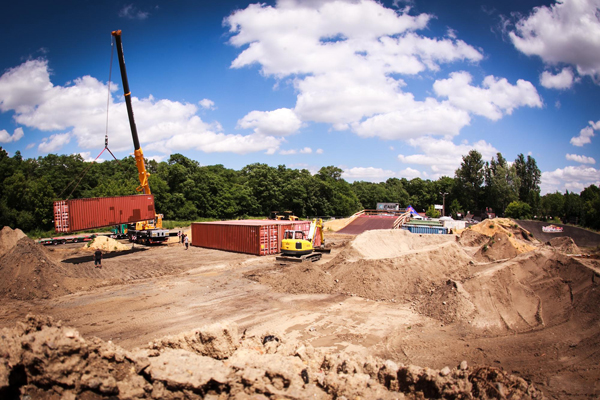 Things with Red Bull Revolution are starting to shape up! Above we’ve got a little preview of the course being built and a press-release from Red Bull about the course and what to expect at this years race (contest?)!

Munich, July 10, 2013 – The BMX community has eagerly awaited the first details of the new Red Bull R.Evolution track. Would the BMX revolution continue? Would Red Bull and Tom Ritzenthaler manage to outbid last year’s track and offer the BMX racers an even more revolutionary course? Now that the new set-up has been revealed, the answer to both questions is clearly “yes”! Anyone who’d like to discover the new track and see how the riders will handle it should secure their tickets now. For further information, please visit HYPERLINK “http://www.redbull.de/revolution” www.redbull.de/revolution.

Already at last year’s Red Bull R.Evolution premiere, the participants were thrilled by the new supercross track. “It will be difficult to beat the terrific 2012 track”, Germany’s leading BMX racer and Olympic athlete Luis Brethauer pointed out. “But as far as I’ve heard, this time they will set the bar even higher!”
The track for the 2013 edition of Red Bull R.Evolution was designed by none other than Tom Ritzenthaler who delivered some innovative tracks before. In co-operation with the specialists of Red Bull and Mellowpark, the American has obviously managed to create a track that has really deserved to be called revolutionary.
“Red Bull R.Evolution2013 will redefine the dimensions of BMX racing. This track is a game changer for the sport”, Tom Ritzenthaler said. “This will definitely be the next level for BMX racing. Completely new obstacles and thrilling features await the riders.” In each race, 6 riders will compete on the 10-metre wide track. The number of participants was reduced from 8 to 6 in order to give the racers enough space on the demanding course.
And this is the set-up of the new Red Bull R.Evolution track: it begins with a 10-metre high starting tower where the racers must gain speed for the upcoming 10-metre mega gap jump. Its landing area sits on a 3-metre high wood construction, which is followed by a flat section and a 15-metre table jump. After the extensive airtime of the first 2 jumps, the riders will face a step-up jump into the first berm. Then, an exceptional obstacle bars their way: The “Berlin Wall”! They will need a lot of speed to get over this element built of a 2-metre high quarter-pipe and a 4-metre lean wall. Straight afterwards, the next highlight comes up: thanks to Tom’s and Red Bull’s innovative track concept and for the first time ever in a BMX race, the track splits into 2 different lines. Only shortly before the start of the heat, racers will learn which line they will have to master. This unparalleled feature will give them an additional adrenaline rush right before the start.
The 2 available lines are called “jump line” and “flow line”. The flow line is a bit more relaxed but longer. It presents some easier doubles and another s-curve before leading to a ramp and the home straight. The jump line, on the other side, is shorter but way more demanding. Over a step-up jump, the riders will reach a container and the following rhythm section. Then, the line leads along the starting ramp and below the gap jump to the home straight where it unites with the flow line again. The home straight is 30 metres long and will make the riders’ legs burn one last time.
As in 2012, the track won’t be razed to the ground when Red Bull R.Evolution is over. On the contrary, it will be rebuilt in order to create a standardized UCI world cup track. This enables German Cycling Federation (BDR) and Mellowpark to offer the German BMX racers perfect training conditions. Thus, Red Bull provides the BMX community with Germany’s first permanent supercross track and at the same time with the base for the world cup race that will take place at Mellowpark in 2014. The BMX revolution not only continues, it’s in full effect and will be carried on for years! Further information on Red Bull R.Evolution, tickets and webcast at RedBull.de/Revolution “