Strictly BMX threw a game of B-I-K-E at their shop with prizes for the younger guys and then some cash and two wild card spots for the Slay The Rail contest for the older guys. Check out what went down! This looks like it was a good time.

“Here’s an edit we out together of the comp we had upstairs in the shop at Strictly BMX the day before 2020’s Slay The rail went down at Revolver nightclub in Melbourne. 2 wildcard entires to STR plus some cash was up-for-grabs and for the Under 16s there was a Game of BIKE with a whole bunch of Cult swag to be won.

The Game of BIKE was won by Byron Richardson, Hayden Vessey 2nd, Dylan came in 4th with little James Pearce giving it a good go coming in 4th! The wildcard jam then took off with the likes of Brock Olive, Liam Thomas, Chris Finnigan, Matt McCallum, Liam Zingbergs & Dullah Djawas all killing the flat rail.

Thanks to Cult for the prizes and to Dre for announcing the comp!

Slay the Rail 2012 from John Young on Vimeo.

I’ve been waiting for this one pretty patiently for a minute now. Ever year for the last 3 years, 2020 BMX Magazine has thrown the Slay The Rail contest which is essentially a rail jam at a bar. It’s pretty epic and each year it just gets bigger and better. This year around you could find Brock Olive, Nick Kajewski, Daniel Johnson, Marnold, Sam Illman, Matt Spencer, Mikey McMah, Jay Wilson, Chris Whyte, Jamie Mauri, Calvin Kosovich, Josh Druce, Liam Zingbergs, Dullah Djawas, Jack Elkins and Jack Kelly all throwing down and things got wild. Check out the video above to see for yourself!

I’m also stoked to see the end that they mention they are doing another event here next month that will be bigger and wilder! Hell yes.

“Slay the Rail has become somewhat of a legend amongst comps/jams, well in my biased opinion anyway. And this years was no exception, the event going off in a big way. 24 riders went head to head in one of Melbourne’s most notorious clubs. Brock Olive schooled the assembled crew to take the win and best trick with Matt “Tenna” Spencer coming in close behind after some of the most brutal slams of the night. Good times, BMX and good crew, what more could you want! We’ve got a feature in the upcoming 2020 issue 45 and will drop a little extra gallery on this post soon. Thanks to all involved, it’s been an epic three years. And a massive thanks to John Young for the slick edit. Yeeeeew!” 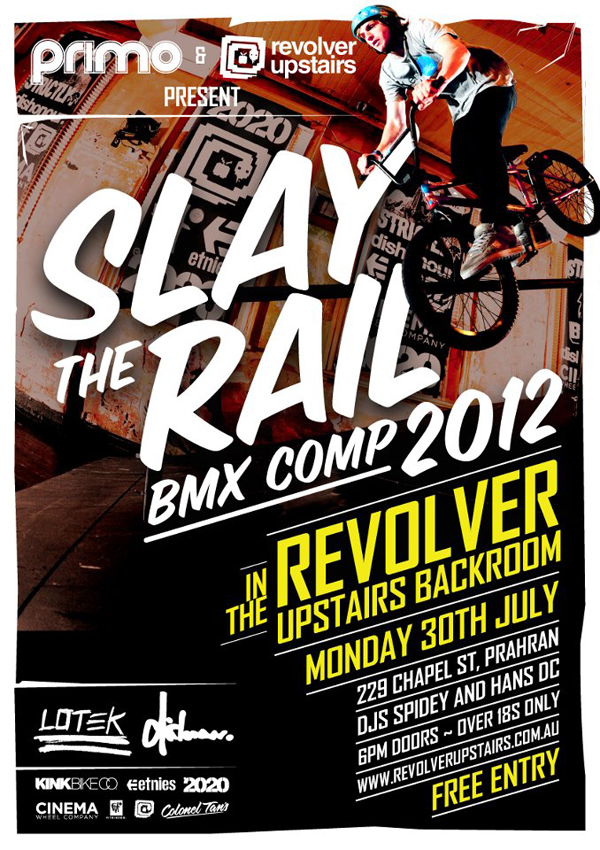 So stoked they are doing the the Slay The Rail contest again for a third time. This always looks like such a good time. If you happen to be near Melbourne, Australia, I highly suggest you make it to this. Below is a video from last years jam!

It sounds like this will be happening again, so get psyched. 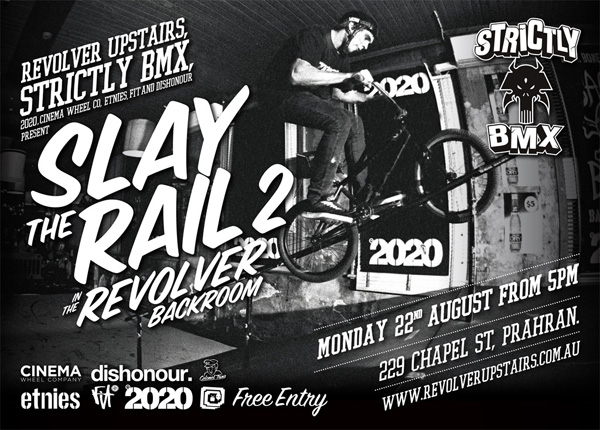 “Following on from the phenomenal success of Slay the Rail in 2010, we’re upping the anté in 2011 with what is set to be the loosest rail jam ever seen in Australia; Slay the Rail 2.

Limited to thirty of the biggest names in the Australian street scene. The rail jam is set to blow up inside one of Australia’s most notorious clubs; Revolver on Chapel Street, deep in the heart of Melbourne’s party district; 229 Chapel Street, Prahran.

This ‘one night only’ event will revolve around a head to head elimination session. Riders will pull a number out of a hat and then go head to head, with one rider claiming each five run session. Riders will be judged by their peers, with a show of hands at the end of each jam. Should there be a split or no decision, a ‘one hit, no shit’ ride off will take place. Riders will then be eliminated until we have two riders who will decide their fate with a five minute + one run final jam, the winner claiming the Slay the Rail 2 crown and $1000, the runner up, $500.

Held on the main room floor of Revolver, Slay the Rail Part 2 will be held on Monday 22nd August 2011, doors open at 5pm with riding from 8pm and an all night party to follow stretching through the main and front rooms. Like last year, the rail will be the focus, but we will be adding a bank to jersey at the end of the run off to facilitate up-rail tricks.”

You can find out more information about the jam right here. Also, incase you want to see what went down last year, check the edit below.