Let’s take a closer look at the Odyssey Springfield Brakes! 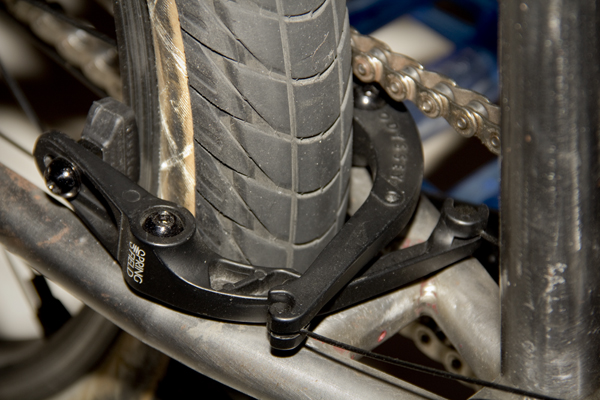 I know, I know… It’s 2013. Who runs brakes? Believe it or not, a good number of riders still like to stop or get their fufanu fix in. I know that I’m definitely the kind of rider that is pretty much required to run brakes since I get pretty sketchy without them.
A few months back I caught wind of some new brakes that the guys at Odyssey were working on that really caught my attention. Over the years there have been some “advancements” in brakes, but they all pretty much worked off the same system. That’s why the Springfield brakes stood out to me. Let’s take a look! 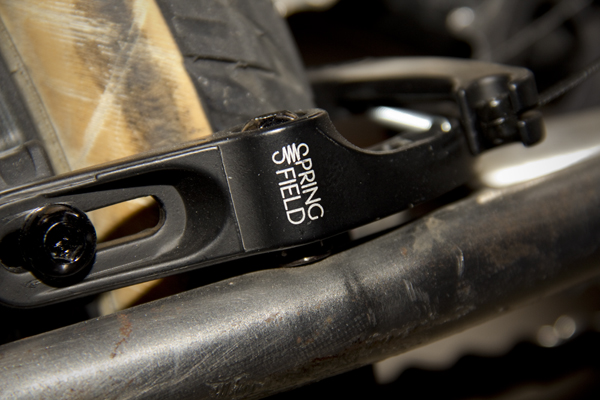 So what was I getting to in that intro? What I was trying to hint at is that Odyssey have done a couple things that are unique to brakes for these new Springfield brakes. Starting things off, the biggest thing is that they’ve eliminated the spiral springs that need to be tensioned on the post. 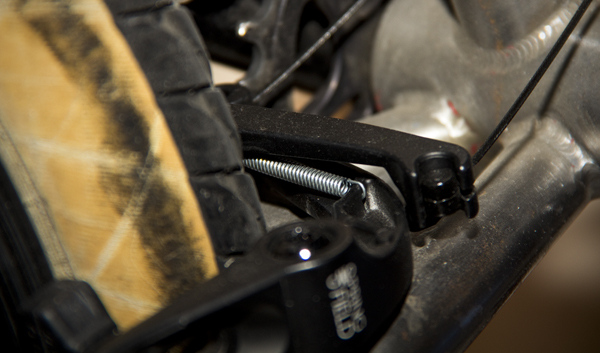 If you look at the photo above, they’ve simplified things by putting a single spring that connects both arms together and gives them enough tension to allow the arms to spring back on their own. This was one thing that really caught me off guard when I first installed them on my bike. I figured the tension would be a little “spongier” just because the spring is pretty much free and has a little play when you poke it. Oddly enough, the tension was just about perfect for what I like. Just enough for a smooth pull that allows me to feather the brakes with one finger. There is plenty of spring and retracts the arms without any issues. I haven’t personally tried it, but if you aren’t satisfied with the tension and feel like it’s a little more than you prefer, you can stretch the spring a little to make adjustments. 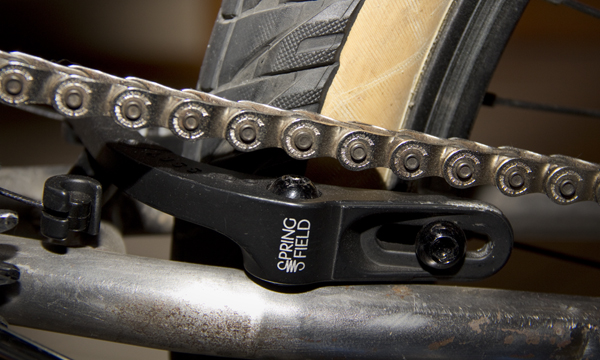 Since the spring is between the arms and not on the brake mount posts, they were able to accomplish two things. They’ve simplified installation by eliminating the need to tension the springs which can be a pain in the ass, and Odyssey was able to lower the stack height a little bit. The stack height isn’t quite as low as the Fly brakes for example, but there’s clearance from the chain. I did notice that the end of the arm is starting to get scuffed up from my chain rubbing on it though. I generally run my chain pretty tight, so that is a little strange, but it is what it is. I should mention I run a 25-9 gear ratio, so there’s not a ton of room to work chain clearance as is with any brakes. 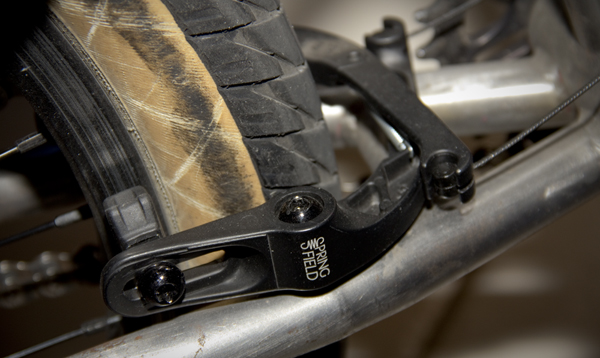 I probably should have mentioned this above, but the arms are cast aluminum. This helps to keep the price and weight down a bit while keeping the arms from flexing much. I haven’t noticed much flex personally, so I guess it’s doing the trick. 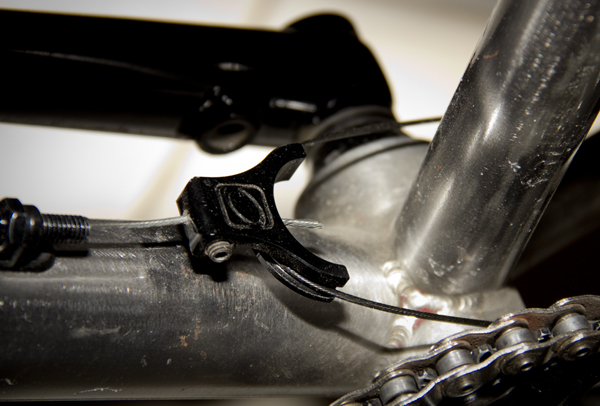 Originally the plan was that I was going to give Odyssey’s new Quik Slic brake cable a test as well. If you aren’t familiar with this brake cable, it’s Odyssey’s classic Linear cable that has a built in cable hanger and straddle cable making it all one piece. I must have goofed up on the measurement a bit because there was just too much of a gap between the brake pads and rim for my personal liking. I decided to clip off the cable hanger and go back to my classic hanger and straddle cable setup I had before. There’s a benefit to this though, I can adjust how far the pads are from the rim by adjusting there. Other than that, you can adjust the distance of the brake pads to the rim at the barrel adjuster on your brake lever or on the one on your top or down tube. I like that since I’m pretty picky about how much play I have between my brake pads and the rim. Easy to install and adjust into the right spot. 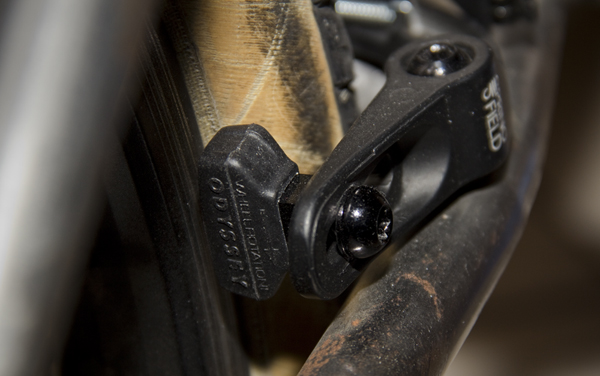 Speaking of the brake pads. The Springfield brakes come with the new Ghost pads. It’s funny how much has changed over the years with brake pads. Back in the day, Odyssey offered a brake pad called the 2×4 which you could compare to a brick. It was wide and long. Ultimately designed to cover as much surface area on those tall and heavy triple wall rims that most kids wouldn’t believe we actually wanted on our bikes on purpose these days. Over the years, pads have slimmed back down, changed colors with different rubber compounds to give a different feel from black to salmon and those squeeky clear ones. The Ghost pads are a smaller style brake pad that covers the surface area of the rim well. I decided to give the black ones that came with the brakes a shot and I’ve been more than impressed. Even with the anodized black that’s stripping away from my excessive brake use, they locked up and hold great. Turns out we didn’t need those massive brake pads after all, haha. 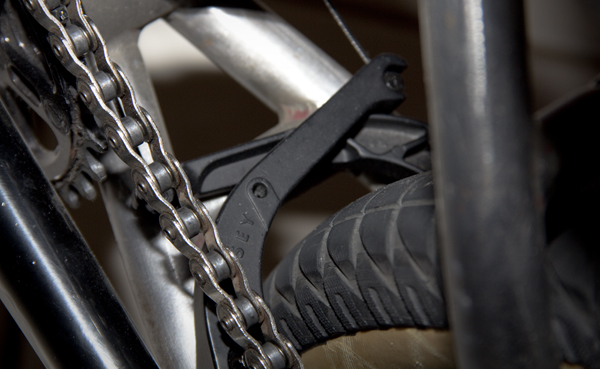 Overall, the Springfield brakes definitely surpassed what I expected. I am loving the tension they have, the simplicity of installation and that they give more than enough braking power to lock those brakes up for fufanus, abubacas, 540 tail taps and pretty much any of those techy ramp tricks you can’t do on a ledge. One of the biggest reasons I was surprised by how well these work is because of the price. Generally, with BMX parts, you pay for the quality. I figured with these retailing at $16.99 that I’d probably run them and be pretty disappointed. Clearly that wasn’t the case. So for $16.99 you get the brakes and all of the hardware, a straddle cable, cable hanger, a replacement spring for when and if your spring wears out, and the Ghost Pads. That’s a hell of a deal in my honest opinion. You can pick replacement Ghost pads up in black or clear for $8.99 that I’d imagine will work on pretty much all brakes. Don’t forget, Odyssey’s products are pretty much available in every good BMX shop around the world, so you can pick them up wherever if you would rather pick them up from your local shop.

So do I think you should buy the Odyssey Springfield Brakes? Yeah, I’m pretty picky about my brakes and I’m more than stoked on how these are working out for me. They’re also an inexpensive route for the guys who like riding brakeless, but like to run brakes from time to time. Add to the easy install and it’s kind of a double win. I’ll personally be running these for quite some time, I can promise that.

That wraps things up. You can find out more about Odyssey and their products by checking out their website — OdysseyBMX.com