Sergio Vera recently built up a new bike, so he went out and filmed this new edit for his sponsor Spy Optics to try out the new unit. Take a peek!

Spy‘s rider from Chile, Sergio Vera, recently made a trip to Buenos Aires, Argentina to do some riding. Here’s a video from the riding he was able to get filmed. Check it.

Song: New Holidays – If I Only Knew Then 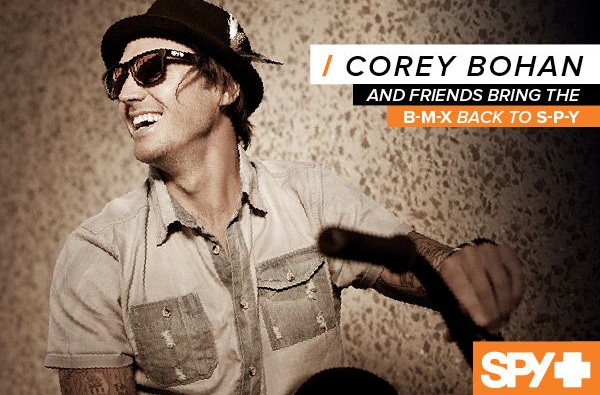 It looks like Spy have put together a hell of a team for 2012. Here’s the official release with all the info below.

“SPY Inc. (OTCBB: XSPY) today announced its BMX team for 2012, featuring Corey Bohan, Gary Young, Brandon Dosch, Eric Lichtenberger and the Free Agent/Rockstar Energy BMX team. “BMX exists where the currents of cycling and action sports converge,” says SPY President Michael Marckx. “We made incredible product for bike riders and racers over the past year, investing significantly in that performance category, and the corresponding successes we’ve achieved have been phenomenal—from signing world-class athletes and teams to

underwriting national-caliber races to partnering with USA Cycling to attracting industry leaders into our sales force. It’s a perfect time to reinvigorate SPY’s presence in BMX and in a way that makes great sense for the SPY brand. The group we’ve assembled includes some of the most respected riders in BMX, absolutely, but they also share our passion for surfing, motocross, and having fun on and off the bike, which is really cool.”

Bohan’s smooth style and creative approach to riding landed him on the top of the podium myriad times in his career, including an unprecedented Gold Medal three-peat in X Games Dirt. Voted by his peers as one of the greatest dirt jumpers of all time, the Australian-born legend continues to raise the style bar from his home in Southern California. He rode for SPY through 2009 and his return to the roster is a welcome homecoming and harbinger of good things to come. “It’s great to be back with the SPY family,” says Bohan. “There are big plans for BMX there and their roster of athletes across the board is all time, from MC and Windham—legends—to John John (Florence)—the future of surfing, my second favorite pastime. It’s really cool to be included among the biggest names in sport during such an exciting time in SPY’s history.”

Young, a native of San Diego (SPY’s backyard) spent the last decade flowing between cement parks and dirt tracks around the world, racking up four Backyard Jam titles and a Park World championship. His never-ending energy and smile make him a favorite among fans and fellow riders.

Dosch’s background in BMX racing gives him the speed and competitive fire to bring his freestyle game to the next level, evidenced in part by the massive corked 720s and huge 31-foot transfer tailwhip that earned him the win at the 2010 Red Bull Stomping Ground contest. He also carries bragging rights as a 2010 Dew Cup BMX Dirt Champion and 2012 Red Bull Roast It “Best Line” Co-Winner.

Lichtenberger spent equal time shredding streets and waves, making his transition from the East Coast to Huntington Beach as smooth as a his rail game. His technical street riding is some of the best in the business and he does it all without brakes and pegs.

Finally, SPY is proudly supporting the Free Agent/Rockstar Energy BMX team through competitions and clinics helping the next generation of BMX riders perfect their racing techniques.

For more information about SPY, log-on at spyoptic.com and facebook.com/spyoptic.”