Every now and then we get on a little nostalgia kick and start looking through Google images to find some classic parts we used to run. It gets us thinking about how much things have or haven’t changed with BMX parts and just how crazy things used to be. We recently got on a kick about BMX pedals and started trying to think of a bunch of the classics. We hit up our Facebook page for some ideas and ended up collecting a real good list. We decided to hunt down some photos and piece together this post going through a bunch of favorites with all the different shapes and styles we’ve seen over the years. Ready for this? Are your shins starting to burn? Are you having flashbacks from a time you blasted your shin and blood started running down your leg like Niagara Falls? Well… If not, you will be.

Above is one pedal that gives us nightmares… The Odyssey Shark Bite pedals. Those bad boys had razor sharp teeth, but you better believe they kept you feet in place. It also lead to quite a few stitches. 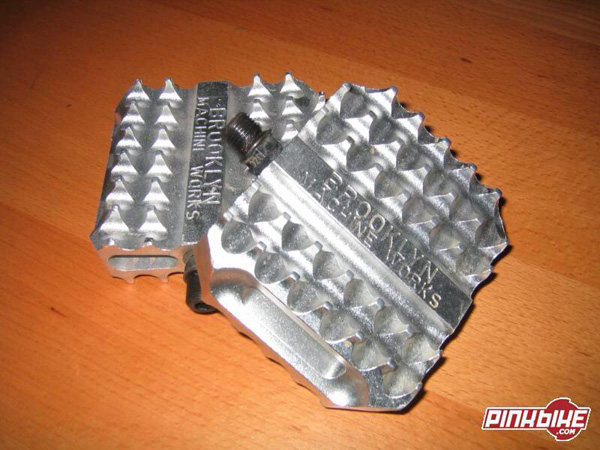 Really trying to get that meat nice and tender? The Brooklyn Machine Works pedals look like they were a meat tenderizer they slapped a spindle on! 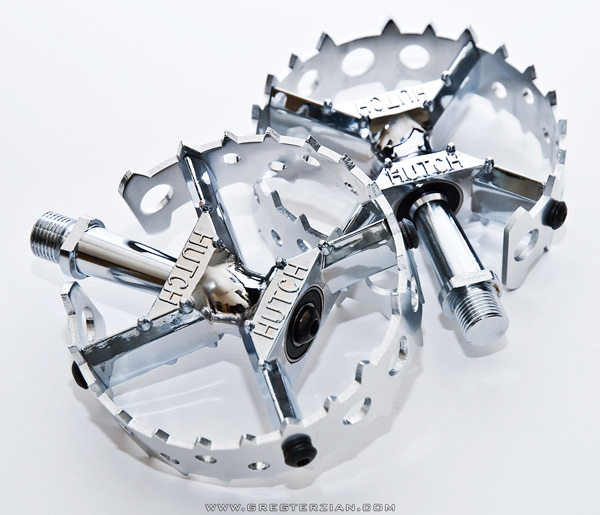 Hutch weren’t scared to shred up some shins. These shiny things look like they could kill a bear… Get it? Bear trap. 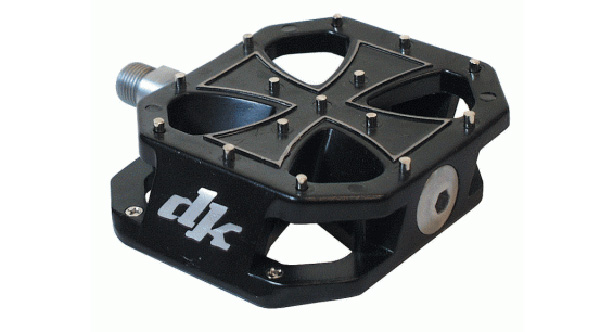 Here’s another classic… The DK Iron Cross pedals. These things were absolute beasts. I couldn’t tell you how much they weighed specifically, but I’ll go with “heavy”. 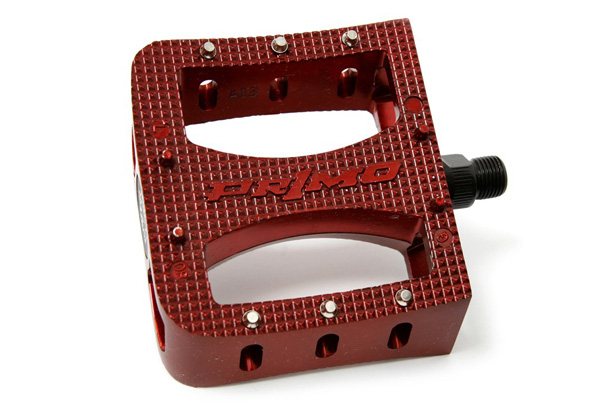 There’s no way you don’t recognize these. I think at one point 8 out of 10 riders ran the Primo Tenderizer pedals. These came in all sorts of colors over the years. 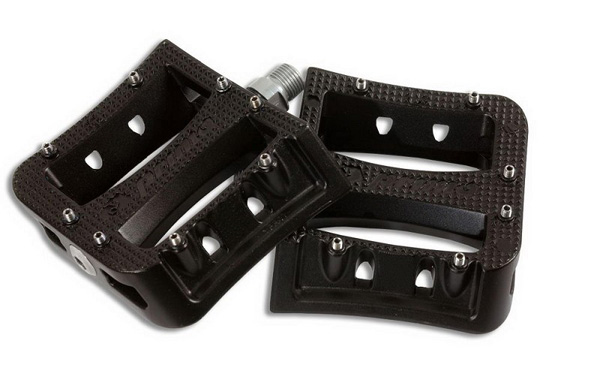 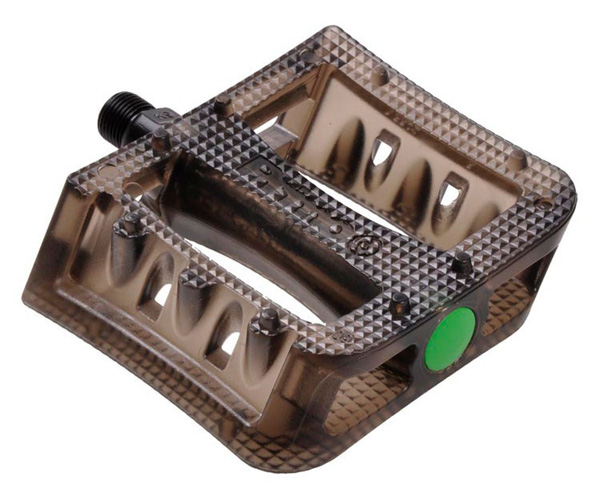 The Josh Stricker signature pedal was similar to the Tenderizer but had a few design changes. It was also one of the earlier pedals to be released in plastic as well. 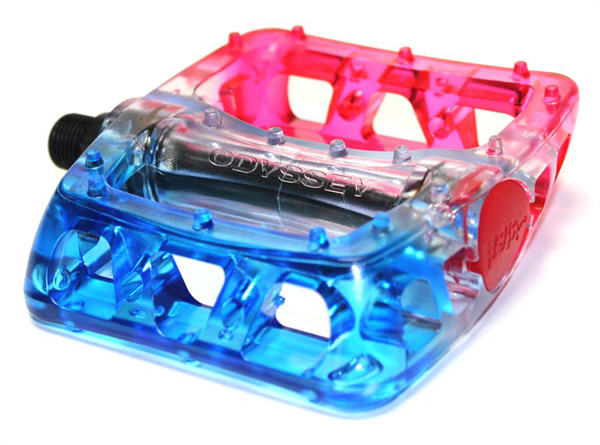 While we’re talking about plastic pedals… The Twisted PC pedal from Odyssey has been a classic for years and has come out with more colors than you can imagine from plain black to every standard color you can think of to see through colors, shiny metallic, cosmic and Hawaiian… I’d love to know the number of Twisted PC pedals that have been produced ever. That’s gotta be a pretty impressive number! 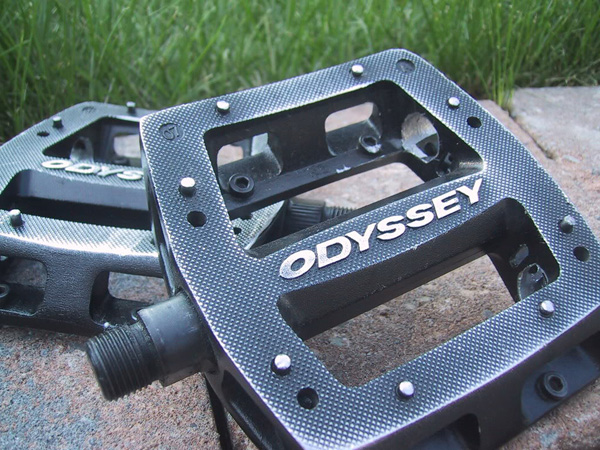 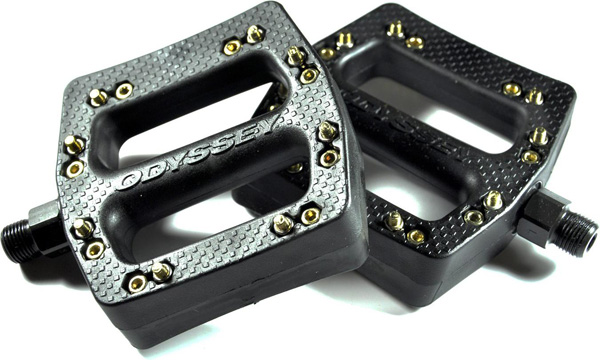 Speaking of Odyssey. There was no way we couldn’t mention the original Jim Cielencki signature Cielencki pedal. Clean, simple and plenty of grip. Odyssey eventually went on to design the JC/PC pedal off that original design. The JCPC pedal is two separate plates that are connected with the pedal pins. The pedal featured an oversized spindle and bushings instead of bearings. We have seen a few plastic pedals utilizing oversized spindles and bushings instead of bearings since. 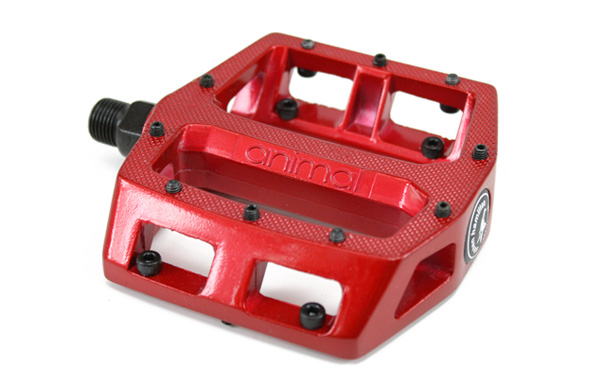 Back to the metal. Here’s another one that saw a lot of love from BMX. Steven Hamilton’s signature pedal from Animal Bikes. This is one I know I personally ran two or three pairs of over the years. They eventually released a plastic version of this pedal as well. 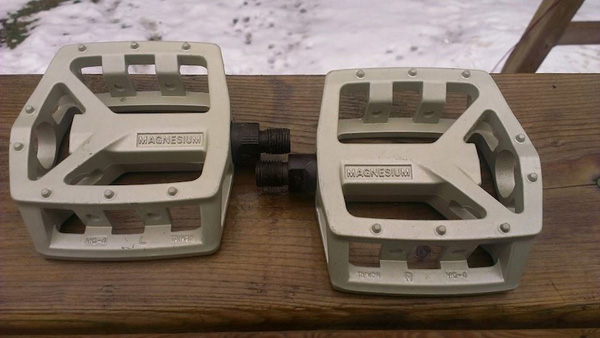 Here’s one I’d get torn apart for if I didn’t mention it! The Wellgo MG1 and Wellgo MG4. These pedals had a magnesium body and were super light. The MG1 used sealed bearings and I believe a heat-treated spindle. The MG4 was for the people working on a tight budget that wanted the lightweight magnesium pedals and featured unsealed bearings and a standard spindle. There was a huge price difference between the two if I remember right as well. 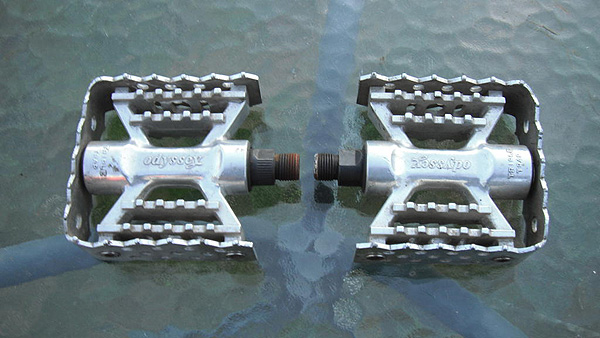 Just when you thought you were over the nightmares! The Odyssey Triple Traps… I’m starting to think Odyssey had a thing for tearing people apart back in the day. These bad boys had triple the fun for those of you who stress pedal bite. 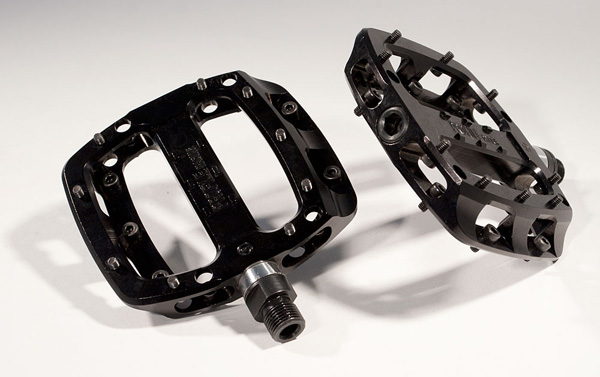 Profile Racing’s classic Gas pedal! These were sealed and a fan favorite for a lot of guys who were able to put up the cash for them. I think there are still a few of these in circulation. I think Mark Mulville was running an old pair he found a year ago? 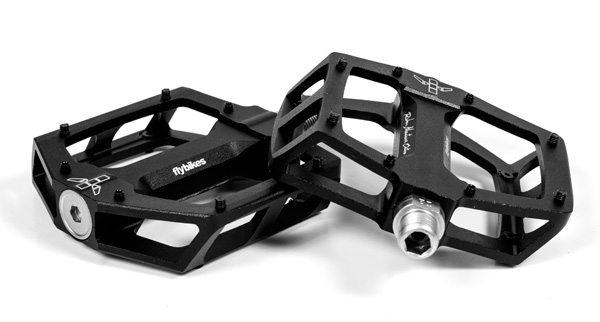 If Ruben Alcantara’s signature Ruben pedals from Flybikes aren’t on your list of best pedals to ever exist, you’re blowing it. I run these pedals currently and between the clean and simple design and sealed bearings they’re worth every penny… Even though that’s a lot of pennies for since they retail around $90. Worth it! These pedals come with grip tape strips which was a pretty unique touch. Fly have since added a plastic version that’s more affordable as well. 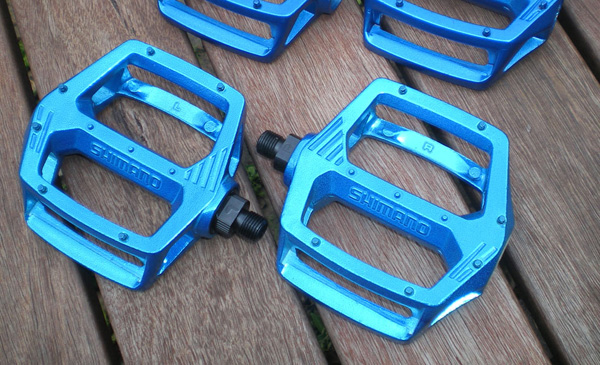 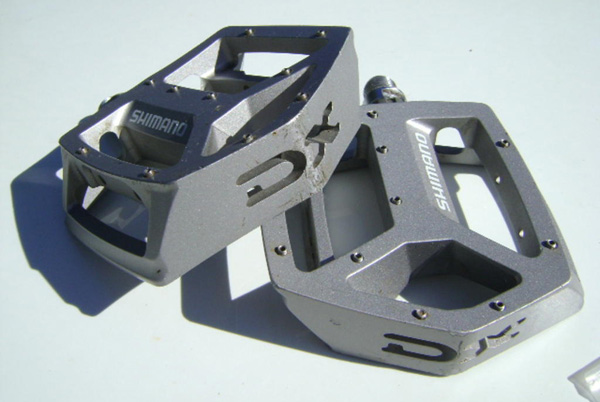 The legendary Shimano DX’s (originals in blue, revamped in grey). These were one of the hottest platform pedals back in the day and for good reason… They weren’t designed to amputate your leg. 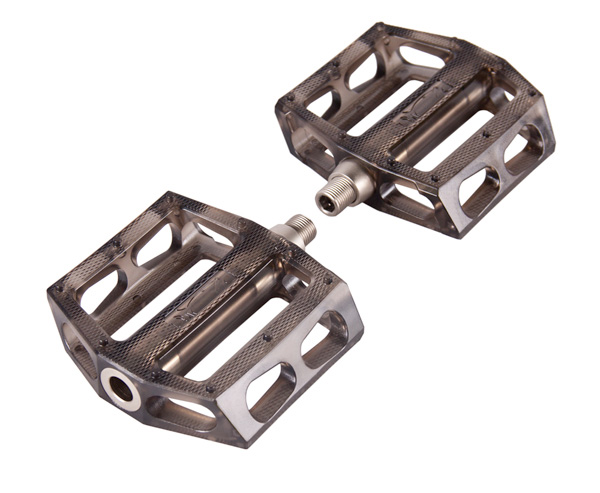 Animal’s “Best Pedal Ever” pedal features a real basic design. The pedal uses an oversized spindle, bushings and a spacer. They’re then compressed when tightening them down. I personally ran these for a while and wasn’t disappointed. 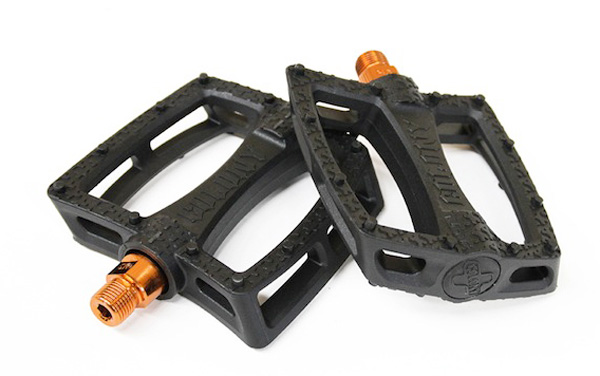 We saw a lot of comments about the Colony Fantastic Plastic pedals when we asked for suggestions, so we figured it would be a good one to include. This pedal features a very slim design and plenty of grip between the pins and body’s grippy design. These come with a handful of spindle colors which is a pretty cool touch. 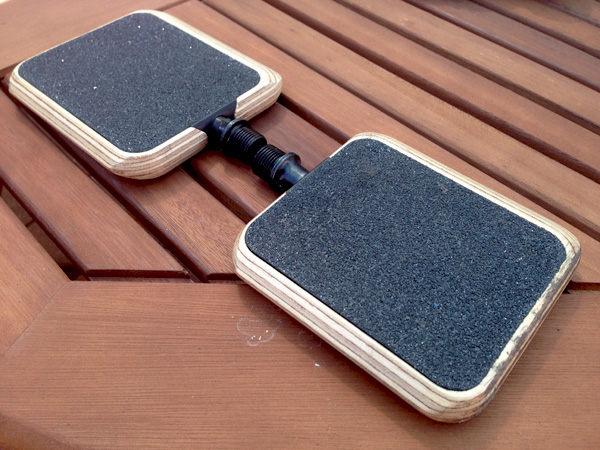 These are designed for flatland, the Moto Bicycles pedal has been a hot commodity for flatland riders lately. They feature a unique design that is flat and simple with grip tape and a wood body like a skateboard. Although these wouldn’t be ideal for street or ramps, it would be an interesting one to try out just to see what it feels like.

Deluxe’s F-Lite pedals have always caught our eye. They’re based off the Shimano DX’s, because why mess with what works? Clean and simple! It sounds like these will be making a return in 2015 now that Deluxe is back up and running full speed again.

Edit: Almost forgot the S&M 101’s! Clean, simple, plenty of grip with the knurling and pins! 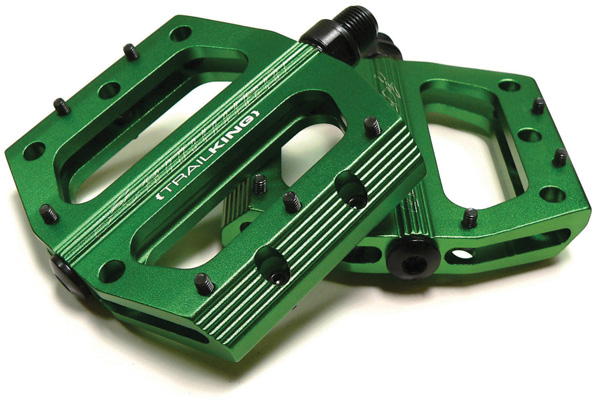 Edit: Meant to get the Atomlab Trail King pedals in on this initially and it slipped by. These bad boys are slim, lightweight, sealed and provide plenty of grip! 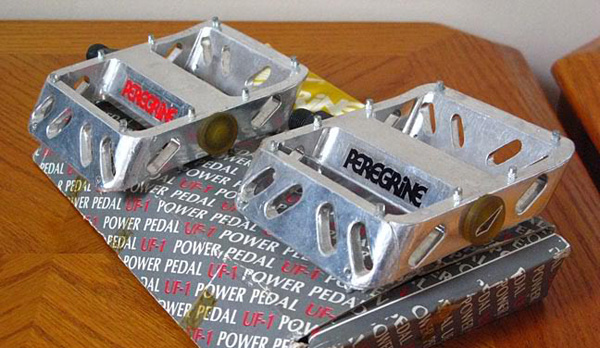 Edit: Jon over at Can You Dig It about lost his shit when he didn’t see the Peregrine pedals on this list! Another classic for sure! 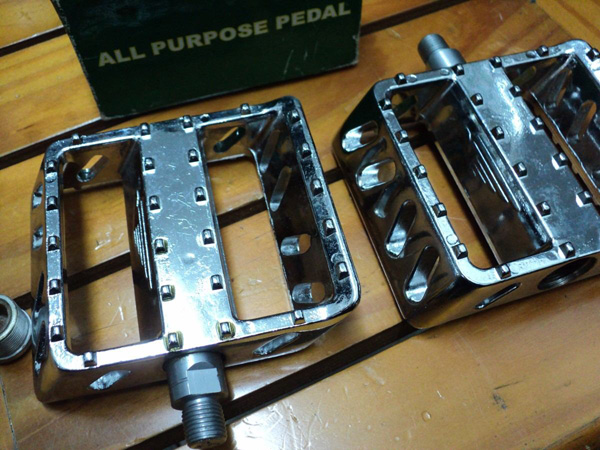 While looking up the pedals above for Jon, we came across the Peregrine Eixo pedals as well. Plenty of pins for the shins! 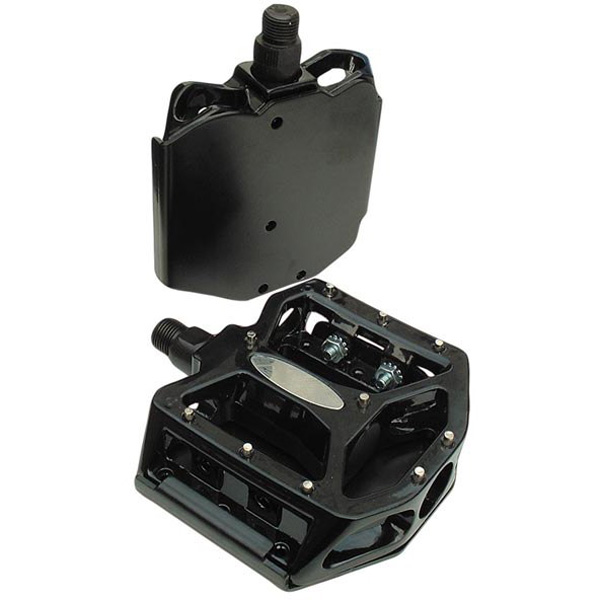 Here’s a little nostalgia for you street guys. Who remembers the grind plates that were available for a short while back in the day? You simply attached these to your pedals and you were good to go with pedal grinds without damaging your pedal or wearing down the pins!

Alright, so that is what we came up with for pedals. Obviously there are hundreds more out there that we didn’t feature, but let’s hear some ideas for pedals we missed or just your thoughts about this in the comments!

You are here: Home / blog / The Art of the BMX Pedal