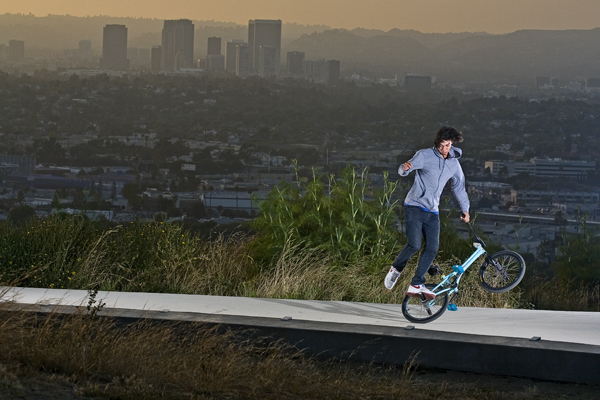 For this weeks TTL I figured I would break down the four main styles of riding which are street, dirt, park and flat and give a little bit of info on what I like and in some cases don’t like about each one when it comes time to shoot. Every photographer is different and everyone has their own opinions on what they prefer to shoot so I figured this would make for an interesting read. Whether it’s shooting in the streets, at a skatepark, at the trails or in an empty parking lot it’s up to you as the photographer to make the photo look as good as possible. When it comes down to it the rider is there to act as the subject and you are there to shoot the best photo you can while working within the existing environment. Keep reading to get a little insight into how I break down each category in my head and approach shooting each style of riding. 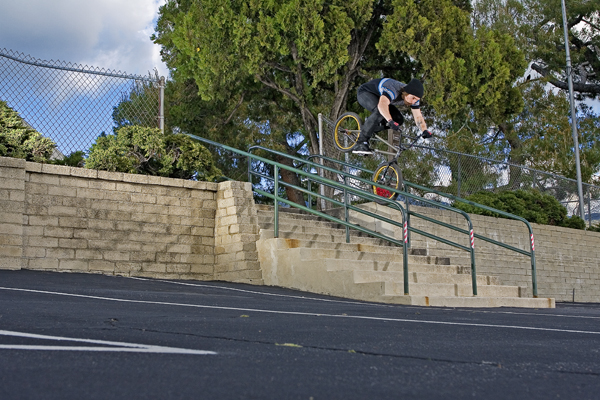 STREET
Shooting street photos is always an adventure. You should always be prepared to expect the unexpected when dealing with security guards, cops, random crowds of people and the occasional neighborhood watch hero. Shooting street has always been appealing to me because no matter how you look at it, for the most part you are always breaking some kind of law during the process. Whether it is trespassing, destruction of property, disturbing the peace or any of the other many charges that riders are threatened with on a regular basis you never know where a session gone wrong could lead you. Don’t be fooled here though, I am not saying that I like shooting street because I enjoy breaking the law. I am simply saying that because every time you walk away with photos from a successful street mission it is like beating the man. It always feels good to pack up your gear at a spot and know that you just captured a moment in time that might never be possible again for many reasons. Just recently a famous school by where I live knobbed one of the best rails in Southern California out of nowhere. I have personally been shooting at that school for years without ever once getting kicked out and went back last week to shoot and found the rail un-ride able. Even the famous El Toro twenty stair rail has been capped. Now also take into consideration old spots being destroyed and new construction being built constantly especially in bigger cities all across the globe. Hell, even the growing roots of a tree can turn an ordinary sidewalk into a spot over time. You can also cruise the same city for years and continue finding new stuff to ride as long as you keep an open mind and get creative. If I had to pick something about shooting street riding that I don’t like it’s the whole riding around a city with a shit ton of camera gear on my back. That and dealing with security. I have gotten pretty good at trying to negotiate and reason with security guards and cops over the years but it still sucks dealing with them. 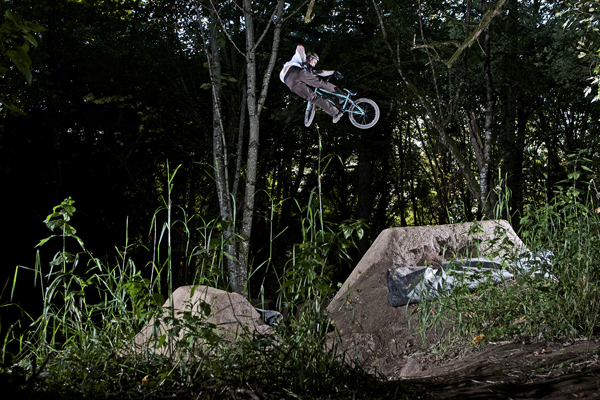 DIRT
Trails have always been one of my favorite things to shoot since the early days of picking up a camera. I grew up riding trails in Upstate New York and started bringing out a camera here and there to document the riding that was going down within the small scene that I was a part of. Now, of course it was hardly the type of riding that I shoot today but my love for shooting dirt hasn’t gone anywhere. I suppose it comes from being a trail rider myself but I will always have an appreciation for what goes into building a set of trails. Some riders dedicate an insane amount of time building and sculpting mounds of dirt into serious works of art and for that reason alone I always try to put as much effort as I can in making the specific trail spot look as good as I possible in each photo. Shooting dirt is always a challenge to me and has been since day one. You have a lot of elements that go into getting a solid dirt photo. Some trails are wide open in a field not giving you much of a background to work with and some are literally built in the middle of a forest creating a wall of trees in any direction no matter how you shoot giving you a much busier background than you might want. You also have to take into consideration that when shooting trails riders tend to be much higher in the air than say a handrail so it’s important to have tall enough light stands to get your flashes high enough to light up the rider properly. The fact that it’s not always easy makes each photo that much more important to me. There is not much I don’t like about shooting trails but if I had to pick something out I guess I would say the fact that it’s so hard to find a clear background to put the rider against and dealing with weird lighting conditions depending on how deep into the trees some trails might be. 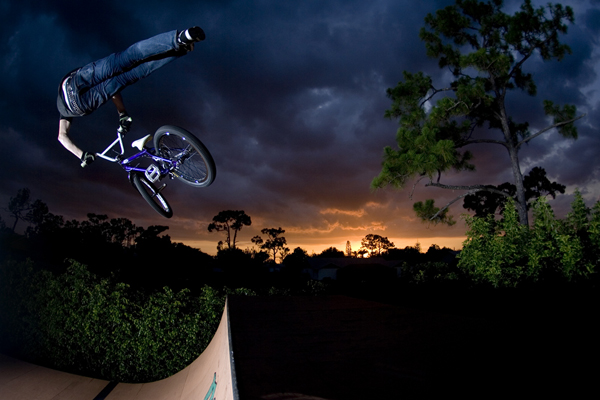 PARK
Shooting ramp riding is a great way to dial in your photo skills. Typically you won’t be getting hassled while riding at a skatepark, which leaves you plenty of time to shoot and work on getting the best photo possible. I approach shooting ramps the same way I do with anything and try to watch the specific trick the rider wants to do a few times. I typically move around each time and really work on picking out the angle that does the trick that we are going to shoot the most justice. Skateparks are also just a good spot to shoot at because you can take ten different riders to the same park and get ten completely different looking photos. Also, you don’t have to drive around all day looking for a place to ride like when you are on a street mission, which can be pretty frustrating. I would say that shooting at skateparks has taught me a lot about lighting just from shooting in non-ideal conditions over the years. There are plenty of indoor skateparks across the globe and if you have ever shot indoor in a dimly lit, dusty skatepark you know it can be a challenge. The good thing though is that you (for the most part) don’t have to worry about getting kicked out and you can really take your time at a park. I suppose a few things that I don’t like about shooting at skateparks is that it’s sometimes a pain in the ass to ask people over and over to get out of your shot and it’s a pain to shoot indoors as well. If anything though, use skateparks to your advantage and just like riders go there to dial in their tricks, make it a point to go there and dial in your photo skills as well as work on your set up/breakdown time. That way when you are about to shoot in the streets you can be prepared to get in and out before security even knows what happened.

FLAT
To be honest I had never really shot flatland on a professional level until I moved out to California five years ago. Not that I wasn’t into the idea but I was just never presented with the opportunity to shoot with many flatland riders. They are few and far between, which makes finding them part of the challenge. I have always loved seeing a good flatland photo and have worked hard at trying to create some images that I hope have inspired some people in the same way I was by other photographer’s photos years ago. To me, shooting flatland is all about the scenery. Of course the trick matters but typically whenever I shoot flat I always look for a good spot to shoot before even knowing what the trick is that the rider wants to do. Once I have a good scene picked out I have the rider show me the trick a few times to get a feel for it. I start shooting after getting the angle down and figuring out the timing of the trick. Another good thing about shooting flat is that the rider can typically do the trick (depending on the difficulty of it) as many times as you need in order to get the perfect photo. Obviously that is not always the case and some tricks are much harder than others but you get the point. Also, as much as flatland riders may seem like an entirely different breed every single flatlander that I have shot with over the years has been rad. They are some of the most dedicated riders to ever touch a bike and you can’t deny that. Plus, these days the gap between flatland and street is closing up ever so slightly. To be honest I can’t really think of much that bothers me about shooting flatland but I suppose one thing would be trying to figure out a way to show the trick in the best light without really knowing exactly what it is supposed to look like sometimes.

Now, if I have any advice for this week it would be to step outside of your comfort zone and shoot something different and out of the ordinary for yourself. If you always shoot at the trails go out and shoot some street stuff and if you always shoot street try and get a solid skatepark photo. Either way always try and push yourself and your own photography and be sure to check back next Wednesday for the fifteenth edition of Through the Lens. As always feel free to leave any questions in the comments section or email me at info@jeremypavia.com and I will hit you back as soon as I can. Feel free to follow me on Twitter and Instagram @jeremypavia. We are just waiting on some final details but there will be a new photo contest announced soon as well so keep an eye out for that and get ready to get out there and shoot for your chance to win some rad shit. We were stoked on the positive reader response we got from the first one so expect this one to be bigger and better.

Check out some past Through The Lens features below…