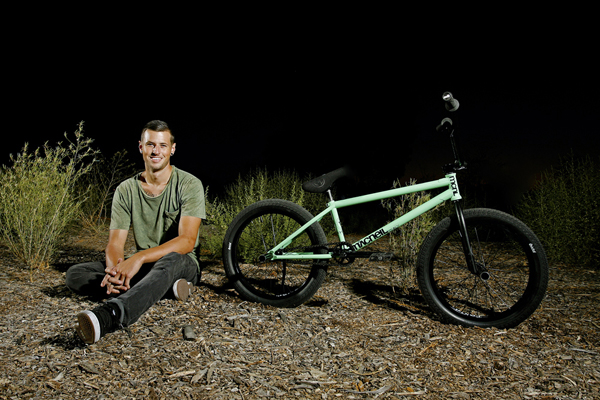 One of the things that I like most about being a photographer is the fact that I get to build some solid friendships with some goddamn talented riders. Over the years I have met the majority of the best riders in the world and have been lucky enough to shoot with a good amount of them. I have been shooting and chillin’ with Kevin Kiraly for years now and it’s rad to have that feeling of trust when it comes to shooting with certain riders. It’s not easy for a rider to just send themselves without trusting the person behind the lens and building that trust takes time for sure. Once it’s there though it makes things so much easier. I am there to do my job, and the rider is there to do their job and it just works. Anyways, on the way up to shoot this past Dew Tour in San Francisco I stopped and met up with Kevin to work on this week’s column. He recently built up a brand new bike, got on the DC flow team and has been stacking clips for a few video projects so we covered all of that and more right here for TTL #36. Check out the Q&A after the jump then hit the Photogallery to check out a closer look at his bike!

First of all, break it down with your name, age and hometown.
Kevin Lajos Kiraly, 24, Livermore CA.

What has been going on lately?
Filming and healing is pretty much how my whole year has been.

What’s good with your signature MacNeil frame? I know it’s about to drop but fill everyone in on all of the details. When can we expect to see it? Where can people get their hands on one and how much should they expect to pay?
It’s from the Varsity series we’re about to put out which is going to include bars. I’m all about my frame being for the RIDERS… not with all the bells and whistles but a frame that has the necessities you need without the ones you don’t. The frame will still be less than 5 pounds though; it’s like 4 pounds 12 oz or something and should meet the $299 price range. I really wanted to make a durable and affordable frame and we definitely nailed it!

You mentioned that you cut out some technical features to keep the cost down. What’s up with that?
Yeah we didn’t heat treat the shit that doesn’t need to be, or like put in all these gimmicky cut-outs or holes but its still got a super sleek tapered seat tube and perfect diameter top and down tubes. The frame looks awesome.

Who helped you out with the whole process? Can you give a little insight into how a rider goes about getting the opportunity to get a signature frame to actually riding the real deal? How involved were you throughout all of the steps?
Darcy, the owner of MacNeil designed the whole thing. I just give him the main things I want in a frame like geometry, gusset suggestions and some others that I wanted and he put it all together and sent it off to get sampled and then it goes into production once some testing is done. The hardest part is picking colors and waiting for the damn things to show up! Ha-Ha.

Do you have any other parts in the works?
Just the Varsity bars that I mentioned but all the new MacNeil stuff is really amazing!

It’s been a while now since you have joined up with the MacNeil crew, how has all of that been going?
I love it! The company and the guys involved with it are amazing, I’m really happy the guys brought me aboard. I don’t ever think about any other companies or anything anymore. I just wanna’ help the company get back to where it used to be. MacNeil was the shit back in the day and it will be again.

Do you have any trips in the works with them?
Nothing that I know of right now but we’ve been talking a little bit about doing a video, nothing will be finalized for a while though.

If people have been paying any attention to you lately they might have spotted you rocking some DC’s. Why don’t we go ahead and take this as an opportunity to shed some light on your new deal with them.
Yeah, I’m riding flow for DC right now. It’s cool because I haven’t had a shoe sponsor in a while and have kind of just been waiting for something really dope to come around. They’ve really revamped their image and I’m really into the products and the team. I’m excited to see what unfolds in the future with them and I am really happy to be with them. Shout-out to Alfredo Mancuso and Mike Aland.

DC is a rad company to get involved with so congrats on that and I am stoked to see what comes of it in the future. What shoes are you currently riding in and what is it that you look for in a shoe?
I ride the new Mikey Taylor shoes and the Chris Cole Ultra Lights. These two shoes are amazing! They are some of my favorite ones that I’ve had in a long time. I really like slimmer shoes but with good padding and heal protection, I’m very picky about what I wear on my feet but I love both those shoes for sure.

Say you got the opportunity to get a signature shoe some day, what would you do differently than what you have seen so far from other riders who have been given that opportunity.
Damn, that’s a good question, I would just take three of my favorite shoes and find a happy medium between all of those and just spend a shit load of time with the designers until we come up with something great.

For all of the photos we shot you wanted to do switch tricks only; what’s the deal with that and go ahead and give some insight into why you are so pumped on switch tricks.
Fuck… skateboarding I guess. I’m just on a switch kick right now and have fun learning everything both ways and I guess I just wanna’ do different stuff then others you know?

If you had to choose between the perfect 12 stair rail, the perfect 4 block set, or a smooth ass ledge which one would you choose and why?
The 12 stair rail hands-down. I just love riding handrails. Like a perfect kinda’ mellow, kinda ‘steep round rail with no kink is so fun.

You made a pretty impressive impact on the BMX community when your Verde part dropped while back and kind of shed some light on how rad putting out an individual part can be. I know you mentioned something about working on a The Come Up exclusive edit so let’s hear about it.
Yeah I was pumped on it. I worked my ass off for that part just for people to tell me they thought it was a web edit. I wanted it to be like that Dylan Rieder Gravis Shoes part but I guess it didn’t come across that way. It has its pros and cons releasing it on the web. The good thing is a lot of people will can watch it but the bad thing is that parts can sometimes get overlooked and swallowed up by the Internet garbage disposal. And yeah I’m working on a New Years Eve part for The Come Up. Adam and I have been talking about doing something for a long time and I’ve been stacking b-roll HD footage that I can’t use for deadline so might as well make it a cool little chill part.

When can we expect to see that and how did the collaboration come about?
Like I said, we just had been talking about doing something for a while and I suggested that I wanted to do a cheesy New Years Eve part, and he was down. I like working on stuff like that because its not like the craziest footage so I don’t stress as hard and lose sleep, but I think people will be down with it.

Since you obviously have some experience with releasing parts online what are your thoughts on that whole situation? What do you think is the main difference between DVD and online within the current state of the BMX industry?
DVD’s are the best, but times are changing and you just gotta’ go with it. More people see your videos online but don’t take them as seriously as DVD shit is. It’s whatever I’m starting to not stress over it. I just wanna’ ride and film and put out good stuff.

Do you go harder when you know it’s for a DVD or do you feel you ride the same no matter where the footage ends up?
It depends really. I try my hardest on everything that I put out, I owe it to the people who enjoy my riding and wanna’ see me kill it. So I ride my ass off for everything, the hardest part is prioritizing what tricks need to go with what project. I don’t want everything to look the same so I try to learn new stuff or find new spots and get cool clips.

Well, after your Verde part I am sure that people are going to be stoked on your next section regardless of the platform so with that said, let’s move on. Since you just got a brand new kit put together, let’s hear about the way your like your bike to feel.
I’m crazy with my bikes. I need my bikes to feel solid, make no noise and just sound like a basketball bouncing on the ground.

What are some parts that you can’t ride without and is there anything about your bike that is custom or is everything straight out of the box?
I ride almost everything MacNeil makes. I’ve never done that before with any of the other companies that I’ve ridden for. They just make the best stuff and everything feels amazing right when you put it on. All of the parts are really sturdy and no joke my bikes have felt the BEST since I started riding for MacNeil.

I know personally from chilling and riding with you over the years that you like to keep your set up looking crispy; how often do you change it up?
I build a complete new bike every like every 2-3 months, I never put new parts on an old bike, I have to get a whole fresh setup.

Anything else you want to mention about your whip?
It’s awesome, the best bike ever…and you’ll be able to crank arm anything if you buy it. Ha-Ha.

That about wraps it up; why don’t you take a minute for some shout-outs and thanks.
I wanna’ thank everyone at MacNeil, seriously greatest bike company ever and can’t thank those dudes enough for everything. Larry at ODI, Mike Aland at DC, oh and just a reminder that the Deadline video is coming out soon…get ready boyz and girlz!

I know you’re pretty on top of your social media game so where can people follow you at?>
It’s @kevinkiraly for everything. I keep it simple.

That wraps up this weeks feature. Thanks for taking the time to give it a read and be sure to check back next Wednesday for the thirty-seventh edition of Through the Lens and as always feel free to leave any questions in the comments section or email me at info@jeremypavia.com and I will hit you back as soon as I can. Also feel free to follow me on Twitter and Instagram @jeremypavia.