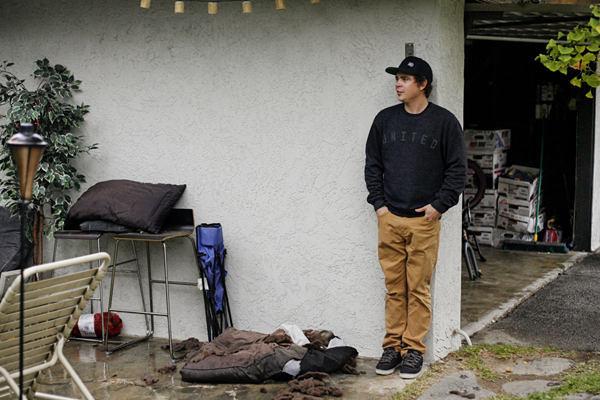 This week’s column came about in an interesting way. My good friend Jesse Bower, aka Fisher from back in New York who is part of the FBM Hall of Fame crew hit me up to come down and visit for a few days. While we were talking he happened to mention Ryan’s name saying that he lives out in So Cal and he was going to try and hang with him as well. As soon as I heard that I got the idea to interview Ryan and get him a chance to fill everyone in on the latest with his life and riding. It’s been quite a bit since most people have heard Ryan’s name so it was my goal to spend the day with him and just see what comes of it. The quick version goes a little something like this…We linked up at his house in the morning, hopped on the subway and headed to downtown Los Angeles to cruise around with him and a few friends from back in Louisville where Ryan is from. There was no real plan and no real destination. We simply set out to have some fun on our bikes and leave the bullshit behind. Although it was raining all day we still managed to find a few spots to ride and it was a nice reminder to slow down a bit and take it all in. BMX is an amazing thing and sometimes it’s days like that which put things into perspective and make you really appreciate something so simple as cruising through city streets with no plan but to have fun. Check out the interview below and then hit up the photogallery to see more photos from the day.

So, what’s going on lately man? It seems like you have been kind of out of the spotlight for a little while now. Why don’t you take a minute and fill everyone in.

Well about a year and half ago I was having some issues with my back to a point to where I could not ignore the pain anymore. I had it checked out and the doctor informed me that I had a ruptured disc. Ever since then I have tried everything to fix the problem without having open back surgery and have had no luck. Now it’s to a point where it looks like surgery is my last option. It’s been driving me crazy really, just the little things you do on a daily basis like putting on socks in the morning is a painful task for me. Not being able to ride for so long has had a huge impact on me as well. This injury has made me realize the love I have for riding my bike. I’m really looking forward to getting back to a normal lifestyle that is medicine free and most of all, free of uncomfortable constant pain.

What is the last video project that you worked on?
Oh man, I guess it was probably the Shit Luck video. I think that was around two years ago.

What’s in store for 2013?
I’m not quite sure to be honest. I’m just happy to be in southern California. It would be nice to work on some video projects for my sponsors next year. I really miss being out and filming. It’s looking like back surgery will be in my near future. I have been wanting to start some sort of business for quite some time now so maybe 2013 will be the year for that. Hopefully this coming year will be a big year for me. 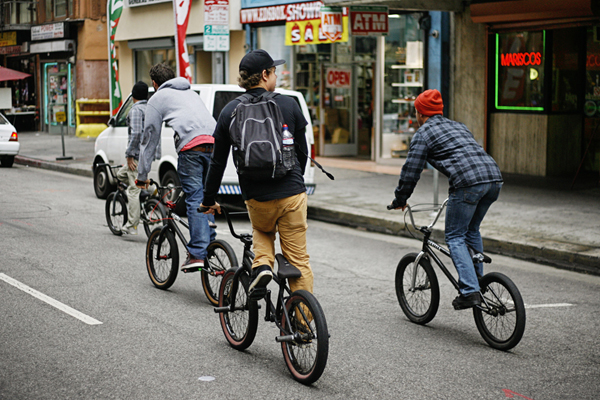 How are you feeling on your bike?
Some days are better than others. It’s not too bad on me after I get an injection though, which that only lasts about a month and a half at best. The injections are really the only reason I am able to ride though. I recently just started kinda’ getting back to where I was before the injury. It’s really strange though, with my back being injured, I can only ride right foot forward where as before I was riding switch footed a lot. It sucks not being able to ride the way that I’m used to but at the same time I’m really hyped to be riding at all.

Who are you riding for these days?
I ride for United, Dan’s Comp, and Shit Luck.

What made you decide to make the move out West?
I just felt like I was at a stand still back in Louisville and I had a job lined up for me before I moved out here so that was motivation for me to make moves. There wasn’t too much going on with the riding scene back home, and I knew moving out here would open up a huge window for me with riding. New riding spots for days, new people to meet and all sorts of crazy shit to see.

How long have you lived out here?
It’s been nine months already. Time seems to fly by living out here.

How do you like the West Coast?
I love it out here. There are just so many different things going on all of the time. The scenery out here is unreal, I have mountains to go and mill around in and explore twenty minutes away from me to the East, and twenty or thirty minutes to the West is the Pacific Ocean. It’s a nice change of pace.

What do you do for work?
I work for a roofing company as a quality control and production manager.

How often are you out riding?
Here in the last couple of months, I have been spending quite a bit of time back at the trails digging and riding. In the recent weeks, I have been back out in the streets, which is really nice. I try to ride as much as possible without making the following day miserable for myself, which is a complete gamble. Some days are better than others though considering the situation of my injury. At this point, it’s damn near impossible to keep me off my bike. I went close to a year without riding, and it drove me bat shit crazy.

You have a style that seems best suited for the streets and have always had a creative eye when it comes to riding. Who or what inspires that and who were some of your early influences?
A lot of my influences come from the dudes I started riding with and where BMX was back in 2000. I always looked up to all the dudes that rode for Animal like Edwin, Vinnie and Bob. FBM was also a huge influence for me especially being around Tag and Leland not to mention all of the time we spent on the road together. Those dudes play a huge role in where I’m at today. There isn’t a single thing I would change about it. I think a lot of inspiration for me comes from the freedom of being on a bike and the fact that we ride manmade structures that are not intended for bikes or skateboards. Skateboarding influences me a lot as well. 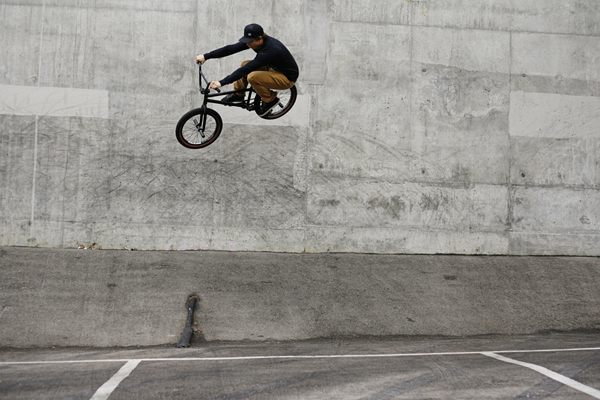 What do you think of the current state of BMX and where do you see it headed in the future?
I could go on for days on this one, but I will just say that some things on the Internet really play a huge role in the direction BMX is heading. Everything from image and fashion to what tricks are cool and trendy. I really miss the way BMX was back twelve years ago.

What’s going on with Shit Luck? I know we talked a bit about it and there was mention of a possible trip this spring.
By the looks of it, I think Leland is back on the ball, although it seems damn near impossible to get my hands on some new goods.

How’s Leland doing?
He is probably stoned in his living room floor crying with his cat “Stupid” and taking pictures of The Fids as well as pasting his face onto other people’s bodies.

Seeing as how you are in Cali now and the weather is pretty much warm and sunny on the daily how stoked are you to forget about that whole thing called “winter” that most of America has to deal with.
I’m pretty psyched to get out of the mid-west weather. It is strange how nearly every day the weather here is flawless…it’s amazing.

Can you see yourself living here permanently?
Yeah, I think so.

What are some of the major differences between here and Kentucky?
The weather for sure. Back in Kentucky the summers are hot, humid and miserable then the fall is really nice. The winters back home suck. It’s rainy and cold with just enough snow to piss you off. And spring isn’t too much to talk about. Out here you just walk out side every day and say “nice.” Well at least that’s how the weather man Fritz Coleman puts it.

As far as riding goes, which state do you prefer?
Cali for sure. 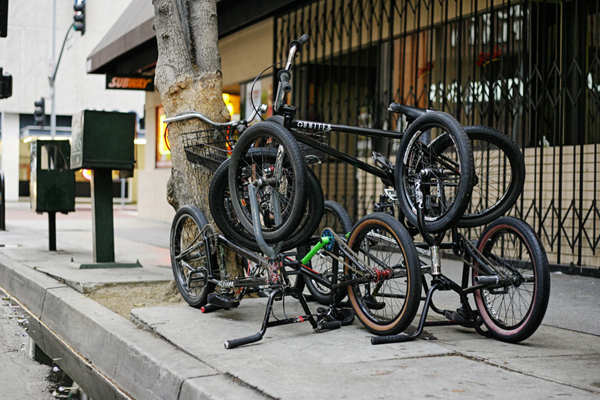 You had a few friends out cruising the day that we went downtown and it was pretty much raining the whole day but it still ended up being a good time. What is it about riding that has kept you motivated after all these years?
BMX to me is just a great outlet that can easily consume your life. It’s not just a hobby or a sport to me it’s a way of life. It has been and will always be that to me, nothing more and nothing less. I cannot even describe the love and passion I have for being on my bike and surrounded by good people that share a common interest.

Well, I guess that about sums it up, unless you have any last words?
I’m really glad Fisher introduced me to you. I had no idea you lived so close to me. Nice to know that I have a new friend in Southern California that will always be down to get out and cruise around.

How about giving some shout-outs and thanks.
Thanks to Ian and Dean at United for being there for me since day one. I’m psyched to be a part of United; it’s really special to me. Those dudes have done so much for me over the years, and I thank them for that. Also, Leland is gay, but he also has done a shit ton for me over the years, so thanks shit can. I’d like to thank Mike Tag for being a huge influence and amazing friend over the years. Rest in peace buddy, you are missed. And last but not least, all of my friends and family that have been there to support me.

Another week, and another column goes in the archives. I was stoked to be able to share this one with you all and hopefully everyone enjoyed it. I love the fact that I never know what’s around the corner. I would give you guys an idea of what’s to come but to be honest I have no idea until it happens which keeps things interesting. As always thanks for the support. Also be sure to check back next Wednesday for the forty-first edition of Through the Lens and as always feel free to leave any questions in the comments section or email me at info@jeremypavia.com and I will hit you back as soon as I can. Feel free to follow me on Twitter and Instagram @jeremypavia.

CHECK OUT MORE PHOTOS FROM THE DAY IN THIS PHOTOGALLERY!