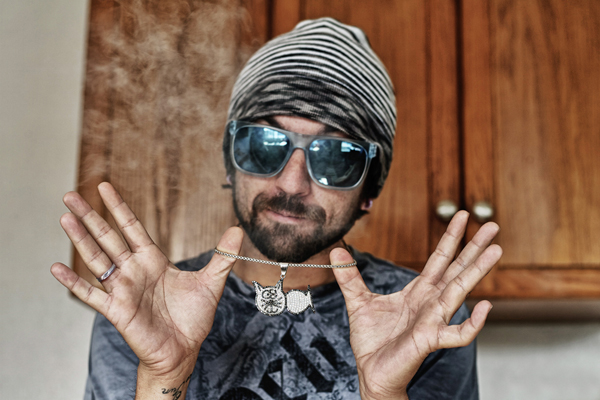 One of the biggest things to pay attention to when crossing the line from photographer to professional photographer is the way that you carry yourself. It is very important to realize that you as a person are greatly responsible for the way that a shoot goes from the moment it begins until “the one” is in the bag. If you have ever had a successful shoot with a mellow vibe from start to finish then you know how good of a feeling it can be when that goes down. The following feature is based on making that happen as often as possible. Keep in mind that this all comes from personal experience and it’s a chance to learn some inside info that I wish I had known years ago when I first started getting serious about shooting. Now if you have any interest in pursuing BMX photography on any level I suggest that you pay attention, and don’t be afraid to learn something.

One of the most important things to know is when, and when not to set up. First of all, when you get to a spot and people start riding, don’t just assume that someone is going to want to shoot and start setting up. You never know what is going to happen and not only can it be intimidating for some people and shy them away from riding but it can also kill the vibe as well depending on the situation. I am in no way superstitious but if I said that I haven’t experienced the curse of the “early set-up” a few times in my day I’d be lying. Give it some time and let the riders approach you. You will have much better results and the process of shooting will feel a much more organic that way. Sure it doesn’t hurt to ask, but know when and when not to push the issue especially if it’s someone that you haven’t shot with before. It’s all about feeling out the situation and knowing when the right time to shoot comes along.

Another important thing to keep in mind is to not just point your lens and start shooting photos of riders that you might not know. For one, as a rider it can be kind of awkward to just have someone start shooting photos of you but more importantly you can get much better photos if you just simply introduce yourself and ask the rider if they would be down to shoot. Be cool about it and approach them with a compliment. Let them know that what you just saw them do was sick and you would be stoked to shoot it, or ask them if they had anything in mind they wanted to shoot and they might surprise you and have something way better ready to go. Also be prepared for them to say no as well. Yes this may not happen at the local level but when you are shooting with big name pros, sometimes they are just straight up not feeling it and aren’t down to shoot. You have to also keep in mind that you are not always going to be shooting your close friends. Sure, that’s how we all start but eventually if you really want to take it to the next level, you have to work on putting yourself out there and making the initial move to get some shit going.

Try not to repeat spots. Everyone has their go-to spots to shoot but the more diverse the spots are, the more diverse your photos will be. Drive the extra miles, make the extra effort to explore and always be down for a mission. You never know what may be around the next corner and those things are all key to keeping your work fresh. Also, no one wants to see too many photos from the same spot. Another thing to consider when going to “repeat” spots is the ever-growing “ABD” list. For those of you who don’t know, “ABD” stands for already-been-done. No one wants to put in work to shoot a photo only to find out that the same trick has already been done on that same exact spot. Again, this is a little more relevant when you get to the stage of shooting with pros on a regular basis but you get the point and it’s never too early to start putting some of this into practice no matter how far along you are with your photography.

Don’t blow the shot. This one seems a little ridiculous to have to point out but it honestly is very important to keep in mind. You have to look at it exactly like it is. You are the photographer and the rider is just that, a rider. They are there to do their job and you are there to do yours. If a rider has to keep doing a trick over and over because you can’t figure your shit out, then you have a problem and you are potentially putting the rider at risk depending on how gnarly the trick is. I have shot plenty of stuff over the years that no joke I was scared for the riders well being. Those are the situations that you have to be prepared for and make sure to bring your A-game. It all goes back to the beginning of the post where I mention that you are responsible for the vibe of the shoot. Play it cool, motivate the rider and reassure them that you are ready as soon as they are and do your best to get the shot. One successful shoot will lead to another and eventually people will be more willing to shoot with you after the word gets out. The more people that you shoot with, the better your photos are going to be and the better your photos are the more that people will want to shoot with you. You see where I am going with that? It’s a never-ending cycle.

Keep an open mind. This seems obvious but it’s actually incredibly important in every shooting situation. There have been multiple times where I have had to shoot with riders from all over the world and some that literally spoke no more than a few words of English. Looking back on times like that it becomes very apparent at how much photography and BMX bring people of all walks of life together. You never know what might happen when you are shooting so being prepared with an open mind is the best thing you can do. Is it hard to shoot with someone who doesn’t know what the hell I am saying? Sure, but you know what, in those cases I did what I had to do to adapt to the situation at hand and made the most of it. After sitting down and putting this all together in one piece it really becomes obvious that being a successful photographer is so much more than being able to shoot a sharp, well-exposed photograph. Take it for what it’s worth, but I can assure you that you will be much more successful behind the lens if you have the right attitude and follow these basic guidelines.

Be sure to check back next Wednesday for the ninth edition of Through the Lens and as always feel free to leave any questions in the comments section or email me at info@jeremypavia.com and I will hit you back as soon as I can. Also, feel free to follow me on Twitter and Instagram @jeremypavia.