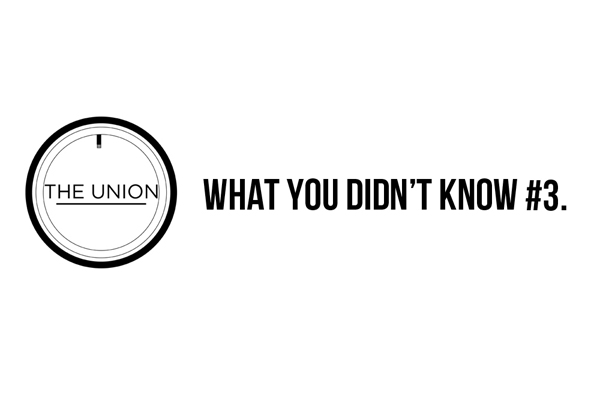 There has always been something intriguing to me about getting some behind the scenes details on a photo. I don’t know what it is about it but I just get stoked on seeing exactly how someone shot a specific photo and get a little insight into the process. I suppose it has something to do with the fact that every photographer shoots a little differently, which in turn makes each story unique in its own way. I can remember studying photos in magazines and borderline obsessing about the way that they were shot and honestly over the years not much has changed. I still find myself getting lost in photos to this day with the same level of curiosity that I had when I first started shooting. With that said, enjoy round three of WYDK.

When I was going through ideas for this week’s column the thought of doing another WYDK kept coming up. For whatever reason I had one photo that kept popping into my head and it happened to be a seamless sequence that I shot of Dillon Lloyd during the time period a few months ago when I was working on the #MCNLBC feature for Soul Magazine. I guess when you shoot a ton of photos over the years it’s easy to have some get lost in the mix and get overlooked here and there but certain ones always stand out to me. This photo of Dillon happens to be one of them. 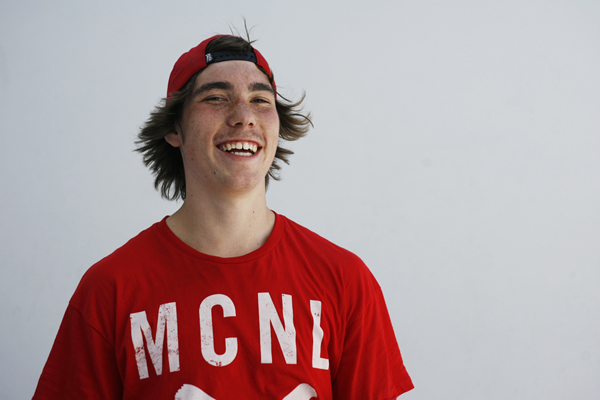 We were out cruising for the day with the legend himself Jason Enns. He happens to live across the street from an amazing school so the first thing we did when we met up was head to the school. Actually, I think we went right to the spot and then Jason met us there. Biz also came out to chill and ride that day too. As soon as we got to the school Dillon just started riding and getting shit done. I just happened to get lucky and catch him on a day where he was on point the whole time. Everything he did was all first try or very close to it. I basically just pointed my camera and watched it all go down in front of me. 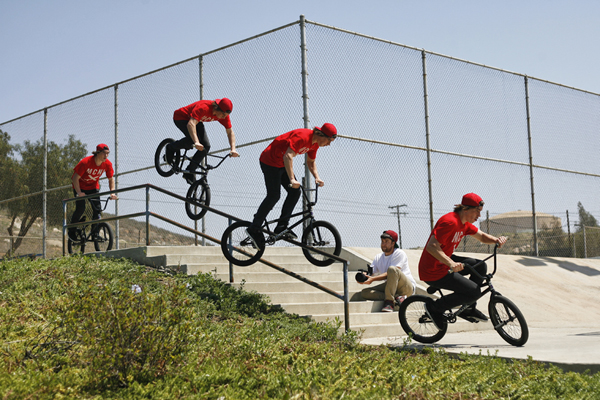 Some riders always keep a log of tricks in their heads and hold back until they find the perfect set up for that specific trick. Well Dillon had just learned switch hanger to crank arm grinds recently before this and although he had only done them on small flat bars he was feeling confident to get it done on a legit rail. So, from the beginning I knew that this photo might be a little difficult to shoot simply because it was lit with existing light and he had never done it before on a real rail. Now, that may sound like a really easy situation where it’s sunny out and magically every photo comes out properly lit but it’s not like that at all. Shooting with natural light to me is all about the position of the sun and the way it lights the object/rider. I took one look at the lighting on the rail and was convinced that natural light was the way to go. It just so happened to be that perfect time of day where everything looked like it was purposely lit for the trick. 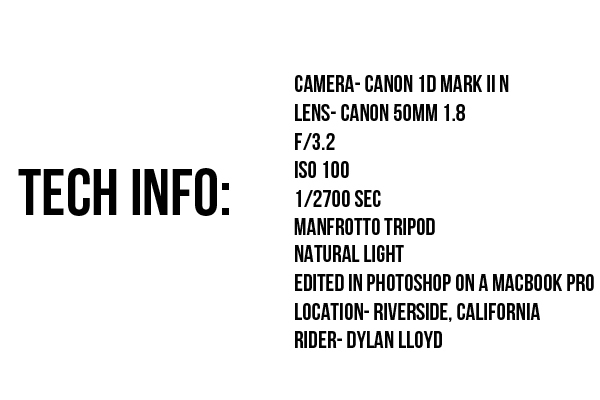 I also knew that I was going to try and shoot a seamless sequence as well to properly show that two completely different tricks were being combined into one smooth, rad looking finished product. It is just one of those ones that when done right looks too good. So, in order for me to do it some justice I decided on the best angle after searching around for a while and started to get things set up. I grabbed my tripod to make things easier for me when I put the sequence together in Photoshop by having every image aligned perfectly. Also, with the camera being on a tripod it allowed me to make sure the focus was on point and I was also able to not worry about shooting at a wide aperture so I could take advantage of a low depth of field. Sometimes it is difficult to shoot with a low aperture and get what you need to be in focus. Since Dillon was moving across the frame horizontally I knew that I could get away with it. A lower aperture also allowed me to stay at ISO 100 for maximum file quality and also allowed me to shoot at a really fast shutter speed and keep the image as crisp as possible. Once I had my tripod mounted I dialed in the exposure, got my focus set on the rail and waited for Dillon to get it going. When I shoot seamless sequences I shoot as fast as I can which provides as many options as possible when it comes time to edit and stitch everything together so I suggest shooting as many files as you can when shooting a seamless. You will thank yourself later when you sit down to edit the images and you have more to choose from in order to dial in the best photo possible. Dillon gave it a few goes and dialed it in as smooth as ever. After pulling the final one I double checked on the back of the camera that everything spaced out the way I wanted it to and once I did that it was a wrap. From there I sat down and stitched together the photos in Photoshop and it all worked out the way I wanted it to. If you are wondering how to create a seamless image from multiple photos like I did for this one click here. Later on the image got submitted for that article and ended up making the cut. Anytime a photo of mine that I am stoked on makes it into print I get so pumped because it means that I can look back on that moment ten years from now and be brought right back to the exact moment I clicked the shutter.

At the end of the day it’s all about making the best decision possible to provide justice to whatever it is you are shooting. Certain tricks look good from specific angles but it’s not always your first instinct that works out the best. There have been times where I have gone between natural light and flash, fisheye, long lens and wide angle and still not been happy with a shot. It all depends on how well you can adapt to a situation and how fast you can think on your feet. But, there are those times when you just envision the photo before the trick even gets done and this was one of them for sure. I pictured the photo turning out exactly the way it did and Dillon really dialed it in for having just learned them right before that on a small skatepark rail. Remember that sometimes the best photos don’t need much help lighting wise and the sun can provide some ridiculously good looking light depending on the time of day.

That’s it for the third edition of WYDK. Always keep in mind that there is no right or wrong way to shoot a riding photo and I hope that each and every one of you that has an interest in becoming a BMX photographer fully understands that and explores every option when it comes time to shoot. Make sure to double check angles, look for unique locations to stand, get low, get high, climb on fences, climb on roofs, and do whatever it takes to get the shot. One thing I can say is that it sucks to get a photo back home only to check it and feel “shooters remorse.” Basically that happens when you see a photo and wish that you shot it with a different lens, at a different angle or with a different lighting set up. Also, always remember that being critical of your work is absolutely essential if you want to survive in the photo world so don’t be afraid to delete some photos and don’t be afraid to re-shoot. As long as you are progressing and learning from your mistakes, you are on the right track. On that note, be sure to check back next Wednesday for the thirty-fourth edition of Through the Lens and as always feel free to leave any questions in the comments section or email me at info@jeremypavia.com and I will hit you back as soon as I can. Feel free to follow me on Twitter and Instagram @jeremypavia.

Also, we are waiting on getting a few more responses from the Quintin team for the final selection of the third TTL contest. The top 13 have been in the process of getting narrowed down to the top three and everyone is having a hard time choosing the order. Keep posted this Friday and we will be revealing the winners and have a gallery as well so be sure to stop back.