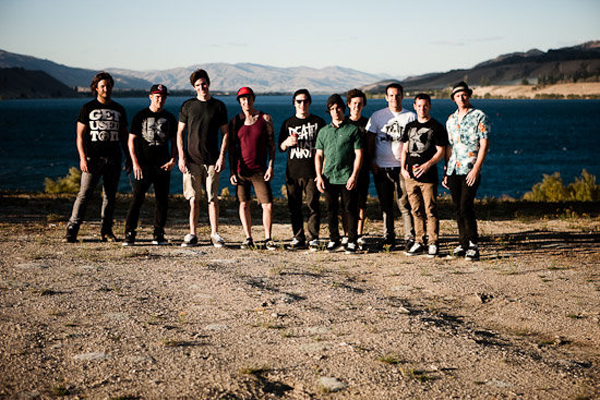 If there’s one thing that everyone that rides BMX needs to do at some point… It is to use it as an excuse to go somewhere. Traveling is one of the best parts about BMX with the endless possibilities of spots, parks, people to meet and places to see. It really doesn’t take much to find a reason to hop in a car with a few friends and mark a spot on the map and just go.
One person in particular who knows this is Kink‘s team manager, Jay Roe. Over the past few years he’s travelled with the team all over the world from the countless trips around the U.S.A to Canada, the U.K, Australia, China, Russia and more.
We figured with the summer coming up for most of us in the northern hemisphere, we would catch up with Jay and talk about what it’s like to constantly be on the go, with a full team to look after, and find out some of the things he has learned along the way. Let’s take a peek!


Hey, Jay! How’s it going? Are you still out in Mexico with the Kink guys?
I actually just got back from Mexico late last night…we spent a week in Mexico City on a Kink trip, and afterwards I ventured further South into the Yucatan to do a bit of traveling on my own.

How long have you been holding things down as the Kink team manager now?
Damn, I’d say its been about 7 years now. The first year or so at Kink I was doing all kinds of different things from working in the warehouse to handling warranties. 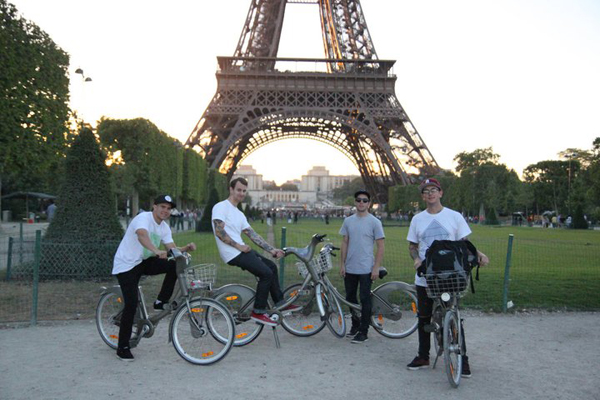 Prior to working for Kink, where were some of the more notable places you had the chance to go? Did you really travel much before becoming a team manager?
I had never traveled internationally before Kink, but since the day I started riding, getting anywhere new with my bike was all I really cared about. Whether I was pedaling to the next town over, catching a ride into the city, or hijacking my parents car to drive half way across the country…I wanted to be “on the road” with my bike. I have always thought it is just the coolest way to live and ride.

Obviously since then you have stamped your passport and booked a lot of plane tickets. Where are some of the best places you have had the chance to go?
We did a month long stint through Asia a couple years back, and that was really cool to get under the belt. While filming for “Jetlagged” I drove a van/bus thing through Eastern Europe and that was so much fun. I love Vancouver, BC and anywhere in France. Flying into NIce, France and seeing Monaco on my first international trip was something I’ll remember forever.

Over the years, you guys have made a lot of trips pretty much all over the world. Did you ever expect to be spending so much time trying to understand the different languages or sorting out currency you have never seen?
I did! Like I said, traveling was something I knew was important to me very early on. I knew I wanted to see other places, I just didn’t know how I was gonna do it. I took French class in high school kind of seriously, and can still speak it enough to be comfortable out there. I am so envious of people that can speak multiple languages, it is such a useful thing to have.

Since you just spent some time in Mexico with some of the crew. How do you go about getting things going for a new trip? Do you kind of just pick a spot the team wants to go or is there more to that?
Most the preplanning is done on my own. I look at places to go not from a riders point of view but from the eyes of someone who just wants to see new places, cultures and hopefully be surprised at what we find. Once I narrow down a few different regions or cities, I’ll take into account whether or not we can actually find stuff to ride, how expensive it is, what BMX teams have already been there and so on…

So once you get a destination and a budget figured out. What’s next? Booking plane tickets and hotels?
Just about. Nobody ever really turns down a Kink trip, so I know whoever I have in mind for the crew, will most likely be all on board. It’s important to get the proper coverage lined up in the magazines or on the web and obviously Darryl is always there to document everything for video. The last few years I have been trying to stray away from hotels and instead finding apartments to rent. It can be a lot cheaper, and you generally get a way better, more authentic experience in the new place.

Does the team manager book all the flights for the team guys? Any guesses at how many flights you have sorted out over the years?
I can’t speak for all brands, but I definitely do all the bookings on my own. There are a lot of things that can go wrong quick when traveling with a group of people, all flying in from different parts of the world. I try to keep everything organized on my end to make it easy and painless for everyone involved. 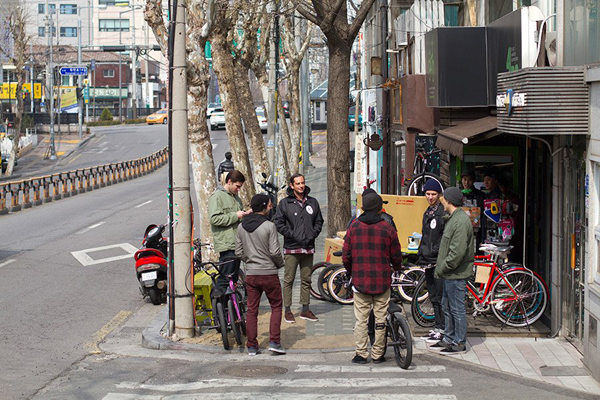 I’d imagine there are some tricks to this to save some money. Any advice on how to get some killer deals when it comes to flights?
Of course you can read up on the tips about booking a minute after midnight on a Tuesday or something. But i just find that planning far ahead enough in advance is probably the best way to save a few bucks. Plane tickets are just outrageous these days.

Any tricks you have caught on to, to prevent jet lag? I can imagine that usually messes with trips pretty frequently.
No! We’ve tried them all. I remember one time spending a week or so in Europe (France maybe?) and when it was over, I could barely recall doing anything but wanting to sleep. Sometimes it’ll get you hard.

Any idea how many frequent flyer miles you guys have racked up?
A lot, I think Tony Hamlin is pretty on top of it right now. He is always getting first class upgrades and all that. It can be pretty beneficial not only for the occasional free flights, but the amount of money you can save in free checked bags as well.

So once the flights are handled and the whole crew gets to the actual destination… What’s next? Do you guys usually get a place to stay and rental cars or do you try and link up with some of the locals? Any budget saving tricks here?
Once we get settled there are normally 3 important things. Find beer, find weed, find good food. Once those things are settled, it is generally smooth sailing. It is always nice going to a place where we don’t need a car. Not only does that save quite a bit of money, but pedaling around is always a more fun way to find spots and see a place.

Speaking of rental cars… Do you think you guys could ever top a cruise ship?
I’d certainly like to try, maybe charter a private jet some day?

Do you usually try and plan out the whole trip and try to stick to a schedule, or do you wait until you get there to figure out what to do next?
Once we are settled in, the plans are pretty loose. Unless on a trip for a distro doing demos and appearances and stuff, I like to keep things relaxed and fun. We don’t get out too early in the morning and we never ride at night really. From there we’re just pedaling, and cruising a city. Sometimes with locals, but often just on our own, finding spots and seeing places for ourselves.

Do you guys try and do some of the touristy stuff, or do you stick to spots and getting clips and photos?
We definitely like to feel as if we’re experiencing a place and their culture. It is always tough when you are there to ride, you always feel like you want way more time there. Trips are always real chill though, so if the squad wants to take a day to see some things, or take a jet boat ride in New Zealand, we’ll definitely do it. 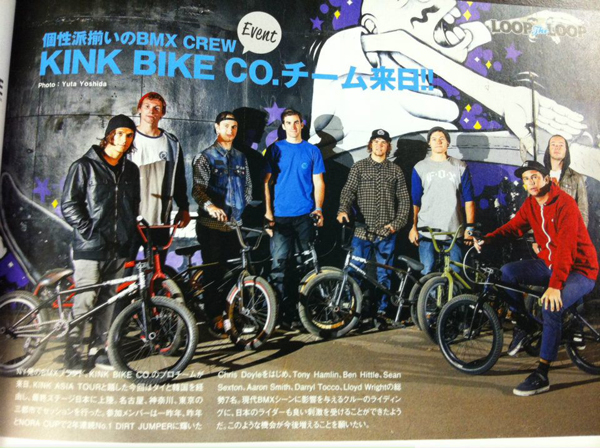 Planning a trip can be pretty stressful. Do you feel the heat still or are you just so used to this that it’s a breeze?
I’d like to think of Kink as a well oiled machine when it come to traveling together. We’ve done it for so long, and the crew hasn’t switched up all that much, besides adding new faces to the mix. This is what I love to do. Everything from brainstorming places to go, to putting the plans together, booking tickets and eventually going on the trip, is all stuff I really enjoy doing.

Do any of the guys bring anything weird when they travel?
Tony Hamlin currently travels with a small guitar, and 2 blow up dolls.

Got any crazy stories from things like plane malfunctions, getting caught up in a sketchy part of a city, getting arrested or anything cool like that?
So many epic times, many not suitable for public knowledge. But definitely one of the strangest happened last January in Bogota, Colombia. We were riding a spot in the city, relatively safe feeling, in broad daylight…and Walter Pieringer got robbed at knifepoint, losing a ton of camera gear at the beginning of the trip. Tony had found a cool set up that he shot something on, and naturally that got stolen as well. We ended up going back and Tony nailed it again for Walters backup camera.

You guys just got back from Mexico, but I’m sure you guys already have your next trip or two planned. Any hints where the Kink team will be in 2014?
Yea, we are taking care of some stuff in Rochester in May, hitting some shops in the Northeast in June and heading to Moscow, Russia in July. The rest of the year is starting to come together, looking to be pretty rad!