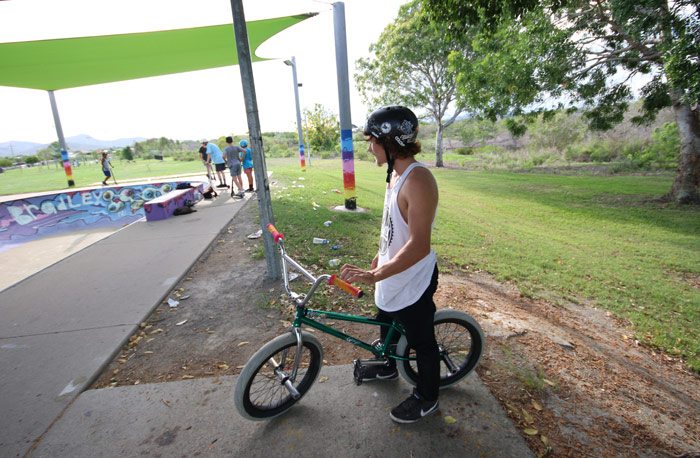 It’s been a little while since we’ve posted up an interview, so we figured it would be a good time to get back on top of that. The other day, Ben Thompson‘s new Colony video dropped online and we were blown away by his crazy technical combos and balance that he was throwing down at his local skatepark down in Australia. We were curious as to just who Ben is, so we hit him with some questions to get to know him a little bit better. Let’s take a look at what he had to say along with a re-up of that crazy video!

What was it that first got you into BMX? Any early memories come to mind from what caught your attention?
What first got me into BMX was watching kids at the skatepark ride. Those guys made it look so fun and I had to try it out.

You have been doing for Colony for a while now. How did that opportunity all come about?
I was riding with a few mates at the time, and they were putting clips of me on their Instagram accounts. Clint Millar spotted them out and ended up hitting me up through my local bike shop, Ingham Road Bicycle Centre, and it went from there.

You had a new video for Colony drop the other week that we were super pumped on, how long were you working on that one for?
The new edit that dropped was something I was working on for about one month. It was a month solid of riding and filming every day. I just wanna send a big thanks again to Kale Doyle for filming every clip.

We noticed you’re into real technical and creative lines. Who were some of the riders that really inspired and motivated you when you first got into riding?
I love technical riding because you can make stuff up as you go and it creates a different style for everyone else. Thats why I enjoy it a lot. Mark Webb has really inspired me to get as good as I am now. I remember being 16 watching hiss edits over and over and over again. Mark has always been a big influence in my life to get good on my bike.

What about these days? Who are some of the guys that get you real excited to ride?
These days I really look up to my good mate Brock Horneman, Chris Courtenay, Mark Webb, Kriss Kyle and Clint Milllar. 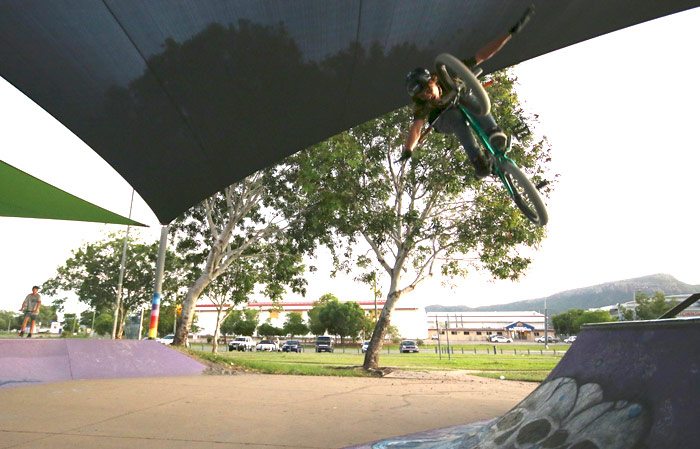 It looks like you have the whole brakeless thing completely dialed in. Have you ever considered tossing on some front brakes to see what you could come up with for tricks?
I used to ride with brakes until one day I broke them and I ended up never putting them back on. I think it gets in my way for the some of the tricks that I do. I have rode a few bikes with front brakes and I find it gets in the way, too. So riding brakless just feels more free to me. No stopping and just going for it.

Have you been working on any new videos that we’ll be seeing pop up any time soon?
I’m currently working on doing a bike check and another edit. I have a few clips stored up already, so keep a eye out for those here in the future.

Have you had the chance to travel much in the past?
The most recent place that I have been was Brisbane to meet Clint Millar and the Colony crew for my first time. I had a blast with all of the boys. It would would be really great to get back there again and work on A Brisbane edit and catch up with everyone

Where’s one place you have never been, but really hope you get the chance to make it to at some point?
One place that I would really love to go to is America to ride the Woodward parks. That would be an amazing experience to meet other riders and see what their riding is like, too.

We know you can shred a skatepark. Do you ever get out on the streets or hit up the trails, or are you pretty much just into park riding?
I have always been into riding the skate park, but for the last 6 months I have been trying to find some good spots around town to ride. I really love watching street riding because it’s a lot like tech riding. You have to have a creative mind to get technical, so I’m really down for street just as much as I am for park riding.

What’s one trick you cannot do no matter how many times you try?
One trick that kills me every time and I cannot do at all is a backflip.

What are some of the things you like to do to keep your body healthy for riding?
The way I keep things fresh on my bike would have to be a good gym session before I ride. Maybe go for a run before I go riding since it gets the body going. No matter what, you have to keep hydrated at all times. Especially in my town since it’s so hot. I always eat the right stuff like fruit and stuff like that will keep your body fresh.

What are you usually getting into when you aren’t riding? Any jobs, school, hobbies or anything?
When I’m not riding, I’m working mowing yards, doing clean ups and stuff like that. If I’m not working, I’m out playing Basketball with my homies.

Are you any good at basketball? I’d imagine based off your coordination on a bike, you probably have some moves on the court, too.
Before I rode a bike, I was really into basketball. I made it to NQ 3 years in a row when I was playing. I wasn’t too bad, but I kinda lost the feel for it when I started riding my bike. 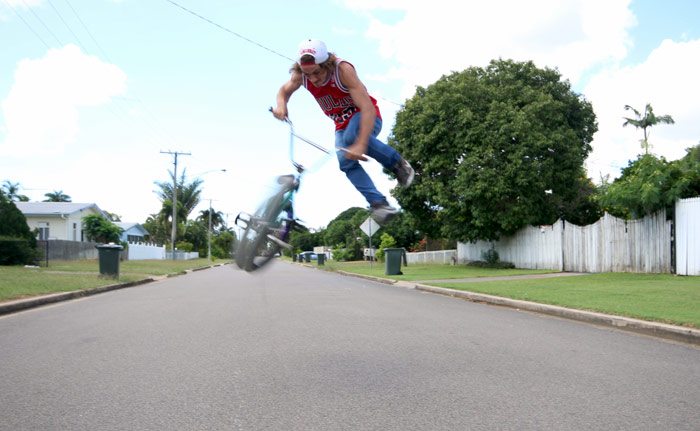 Let’s say you ended up winning the lottery and ended up with millions of dollars. What’s the very first thing you buy and why?
If I won the lottery, the first thing I would buy is an indoor skatepark. Not only because I would love to have one in my town, but because it would help make our scene for BMX bigger. It would get a lot of the kids off the street and into something that could help them in the long run. It would be for people to learn and get much better.

What’s something about yourself that most people don’t know?
Most people think I just ride my bike and that’s it. I’m really kind hearted and I love seeing people get better and be happy. In this sport, I can help a lot of kids and thats where my enjoyment comes in.

Where do you see yourself in five years?
I see my self traveling the world doing what I love, and that’s riding my bike.

What was the last song you heard and movie you watched?
Last song: 2PAC – Dear Mama
Last movie – Bruce Lee Enter the Dragon

Do you have any shout outs or thanks?
Big thanks to Clint Millar, Cooper Brownlee, Wez Turner and Yourself for all you guys have done for me!