“After a successful Sydney bank robbery, with the robbers wearing pig masks and wielding shotguns, the man in charge, The Boss (Bryan Marshall), plans a further and larger payroll robbery for two days later worth at least $1.5 million, hoping that he can trust his less-than-competent gang headed by Whitey (David Argue) and Moustache (John Ley) to do the job properly, with anyone who doesn’t answering to him.

Two young BMX experts, P.J. (Angelo D’Angelo) and Goose (James Lugton), meet Judy (Nicole Kidman), who is working as a trolley collector at the Warringah Mall during the school holidays in order to be able to buy her own BMX bike, and accidentally get Judy fired from her job when they crash into trolleys pushed away by the local “Creep” (Brian Sloman). The three go out in Goose’s dad’s runabout on the harbour searching for cockles to sell in order to fix their own crashed bikes, as well as getting Judy her own, and stumble onto and steal a box of police-band walkie talkies that the bank robbers were hoping to use to monitor on police traffic. After stealing the box, the kids pass Whitey and Moustache who are on their way in their high-powered motorboat to pick it up.

Judy, P.J. and Goose sell the walkie-talkies to other kids in the area. The Bayside Police are able to hear the kids using the walkie talkies. Judy, P.J. and Goose are also unaware that the robbers know who stole the box. After they are spotted and chased late at night through a cemetery by Whitey and Moustache wearing monster masks (going formal, according to Whitey), they manage to escape. The next day, P.J. and Goose pick up their newly repaired bikes whilst Judy buys her bike. Judy is caught the next day by Whitey and Moustache while getting a second walkie talkie for The Creep, but escapes with the help of P.J. and Goose. The goons chase the Bandits in a cartoonish chase across opportunistic sites around Sydney, including a memorable escape down the Manly Waterworks water slides, complete with BMX bikes.

The trio are finally arrested but escape police custody and, with the help of the local kids, launch their own plan to foil the planned payroll robbery. Using the walkie-talkies, the Bandits pinpoint the meeting place for the robbers, then proceed to ambush and apprehend the robbers. The Boss, Whitey and Moustache escape in a removal truck with Judy as a hostage, with P.J. and Goose taking chase. They cause the truck to crash, with police soon arriving to arrest The Boss, Whitey and Moustache. ” – IMDB

“Two BMX expert bikers and a friend of theirs (Kidman) become entangled with a group of bank robbers after discovering a carton of walkie-talkies. 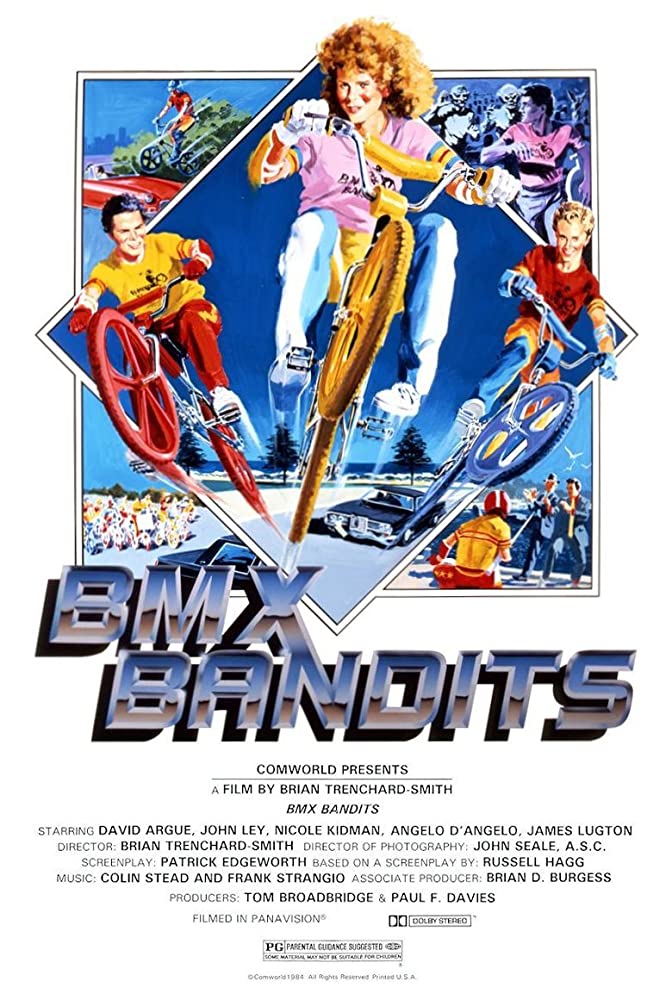 What do you think about the BMX Bandits movie? When was the first time you actually saw this movie? Let us know what you have on your mind in the comments down below!

Check out all the latest BMX videos, news, products and more right here!