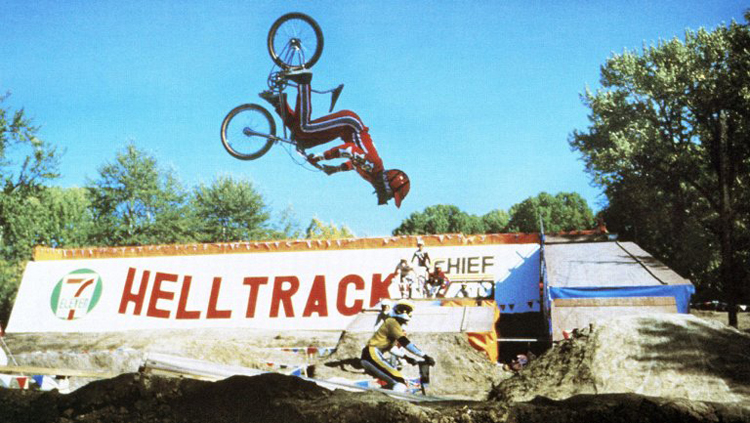 The full “Rad” movie is no longer available online for online streaming. If you are interested, you can still buy the movie online from the Amazon link below if you would like a DVD copy of it, or you can also rent it for digital streaming on Amazon Prime for $3.99! Also, you can check out details on the 4K version of “Rad” that is now available right here — “RAD” 4K Restoration Out Now!

Rad is a film about BMX racing, first released in the USA in 1986. The film was written by Sam Bernard and Geoffrey Edwards and directed by Hal Needham. It stars Bill Allen and Lori Loughlin. Parts of this movie were filmed in Cochrane in Cochrane, Alberta, Canada, Colonel Macleod Jr. High School, and at Bowness Park, both in Calgary, Alberta.

The film’s story focuses on Cru Jones (Bill Allen), a young BMX racer who lives in a small town with his mother (Talia Shire) and sister. Cru is faced with a tough decision: the qualifying races for Helltrack are the same day as his SATs, which he must take in order to attend college. However, winning Helltrack means a lucrative sponsorship deal and fame. Cru chooses the latter option, ignoring his mother’s wishes.
The Helltrack race is endorsed by the city and a duplicitous Duke Best (Jack Weston), president of The Federation of American Bicyclists and owner of Mongoose bicycles. Best keeps adjusting the rules in order to keep Cru out of the race and to ensure BMX star Bart Taylor (1984 Olympic gymnastics champion Bart Conner) has an easy road to victory, thus providing a financial windfall for Mongoose Racing, Bart’s sponsor.
Racers from all around come to this small town for the Helltrack and Cru meets Christian Hollings (Lori Loughlin), who becomes Cru’s romantic interest. Christian and Cru have an interesting scene at the local high school dance where, instead of dancing like the other couples, they perform freestyle bike stunts on the dance floor, to the awe of many. Duke Best and his flunkie step over to the punchbowl, and “wake up those drinks” to which the mayor/restaurant manager says “don’t mind if I do.” After being blocked from the race due to a last minute rule change on participant sponsorship, Cru is ready to give up his dreams of winning Helltrack. Christian provides Cru with an idea for how he can still enter the race. With the help of one of the townsfolk, Mr. Timmer (Ray Walston) and the founding of “Rad Racing,” a small t-shirt business started by Cru’s classmate Matt Weston., Cru is finally able to enter Helltrack. Sgt. Smith tells Cru to “pretend he’s in the lumberyard….Go balls out.”
Duke has his riders hold back while ahead of Cru in an attempt to sabotage his race, without success. Bart, who leads the race, slows down so that he and Cru can face each other one-on-one in the final stretch. Cru wins, and offers Bart a spot in Rad Racing as the film ends.”
For this trailer was written a good essay about Rad Racing and motors involved in the progress of machines.
Here’s the trailer for the movie…

You are here: Home / BMX Videos, Products, News and More / RAD – Full Movie
Note: This site contains affiliate links and we could recieve a small comission that supports this site if you were to make a purchase on their websites using our links.