Ashley Charles spent some time in Hastings, England trying to get some riding time in the warehouse. It sounds like he got everything figured out with his visa and is heading to the U.S here soon so he can get an early spring since the video was filmed.

Odyssey dropped their latest print ad featuring Mike Aitken It looks like he’s continuing to get back into the swing of things. You can download the full-resolution version that can be used as a desktop background by hitting the Odyssey site!

Profile have been sitting on some fresh footage of Tony Cardona for a bit and finally released it on the world. It would appear he’s finally back at it after surgeries and everything. Hopefully 2011 has more Cardona footage in it.
Filmed and Edited by Davis Finn James

Ride UK have been producing these One edits for a while now. One rider, One spot, One session kind of deal. Paul Ryan puts in work at the Irlam skatepark with no fear of water. 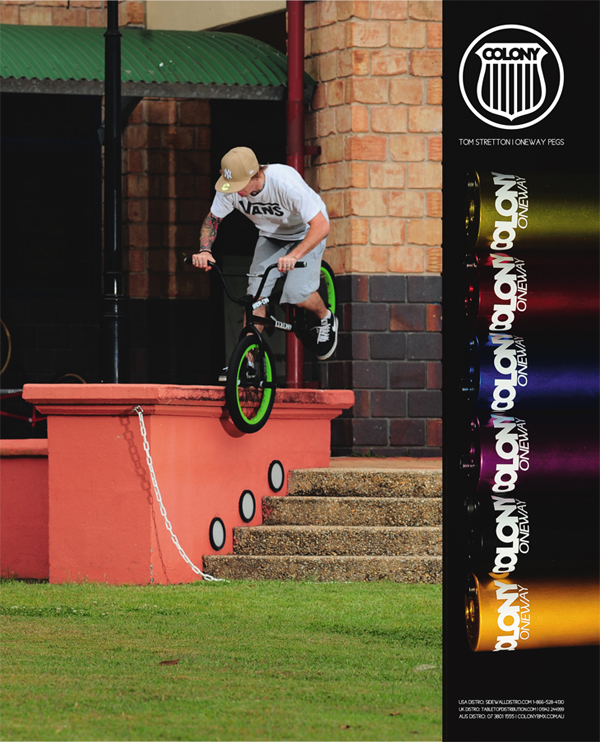 Colony posted up their latest print ad that is featured in the new issue of DIG. Front peg magic.

Mat Olson has this new edit for Deco from all over the place. I’m trying to figure out if that handle bar stab was real or not. I’m going with no, but then again with Degroot editing you never know. Also, after you check out this edit, head over to ESPN and check out a photo gallery of Chad shredding his backyard pool. That’s what’s up.

“Mat riding arizona, colorado, and everwhere in between. Some really good rails, wild crashes, and a session on some of the sketchiest (yet fun) ramps ever.
DecoBMX.com
Deco Flickr
Deco Tumblr
Deco Facebook
@Decobmx09

I’ve been a big fan of the Greenfilms edits that have been popping up lately. This new one of Thomas Calcagno is no different. The guy gets seriously wrecked a few times in the beginning but then kills it.

“GREENFILMS . thomasCALCAGNO
After 2 sessions and a crash welcome 2mn with Thomas CALCAGNO, GreenCrew Member during this winter.
pic by Perraud“

Kink dropped a fresh new Ben Hittle edit from his time out in southern California this winter. It blows my mind that Ben isn’t on Kink’s pro team…