Although there was not a hint of nudity in this, Danny MacAskill did get a chance to ride around the Playboy Mansion for his latest video. This one isn’t quite as wild or crazy as his past videos, but you gotta admit you’re still jealous!

“The legendary Playboy Mansion has seen more than it’s share of action over the years, and trials biker Danny MacAskill has thrilled millions with his videos, so it was only natural the two came together for a clip sure to put a new meaning to the term “Bunny Hop.”

While recently in Los Angeles on the heels of his dramatic riding film “Epecuen,” MacAskill was surprised with the opportunity to lighten things up a bit and take his skills to the fabled home to Playboy and Hugh Hefner. With more than six acres of land to roam (and not to mention numerous creatures; human and animal playing about), it was certainly a new experience for the masterful rider more used to balancing on treacherous ledges than entertaining a pool full of giggling beauties by riding atop the infamous Grotto.

While the usually shy MacAskill admitted he was a bit distracted by the “scenery,” he left knowing it will be an experience he’ll talk about for years to come. “It was a surreal experience, definitely something I can look back on in 20 years’ time and laugh about. 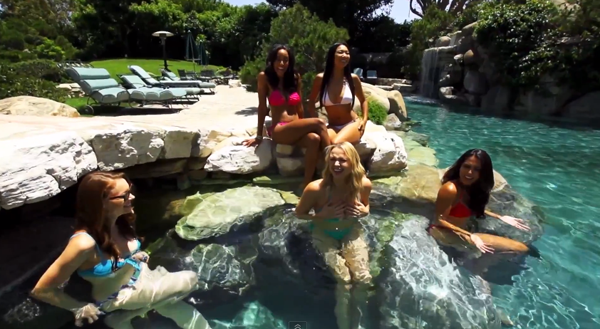 You are here: Home / BMX Videos, Products, News and More / Danny MacAskill at the Playboy Mansion?
Note: This site contains affiliate links and we could receive a small commission that supports this site if you were to make a purchase on their websites using our links for no extra charge to you.