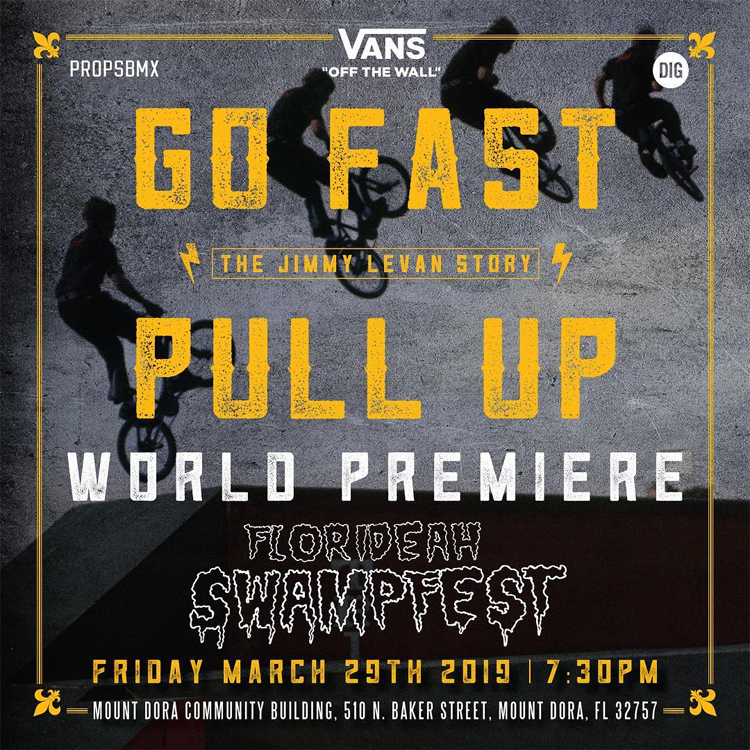 What are you doing Friday, March 29th? Well, if you happen to be in Florida for the annual FloriDeah Swampfest contest, you’ll want to roll on over to the Mount Dora Community Building in Mount Dora, Florida for the world premiere of the long awaited, highly anticipated “Go Fast, Pull Up – The Jimmy Levan Story” video that will be premiering there! Chris Rye from Props and Jerrod Glasgow have been putting in some heavy time and a lot of miles to make this one and it’s bound to be amazing. You will NOT want to miss this if you are in the area. If not, we’re sure it’ll be available to buy shortly after!

“ eagerly-awaited documentary film about @levanjimmy “Go Fast Pull Up” is having its world premiere the night before #Swampfest. Presented by #vansbmx #propsbmx #digbmx.
.
Friday, March 29th at the Mount Dora Community Building, 510 N. Baker Street Mount Dora, FL 32757. Theater is located approx 12 miles from Swampfest grounds.
.
Doors open 7:30pm, movie at 8pm w/ a 1hr 45mins running time. Free admission to Swampfest attendees w/ beer, wine and liquor available at the venue. The church gap @standardbykecompany Trail Boss build from the movie will be on display for all the midschool fans.
.
Pre-orders opening March 15 and yes we will have copies available at Swampfest.
.
#gofastpullup a @chrisrye documentary film in association with @realpropsbmx & @digbmx | Supported by @vansbmx66”