After we dropped that Evolutions of the Seat Post Clamp post the other week, we heard a lot of really positive feedback from people that were just psyched to see all the changes and be reminded of their past. We also got a pretty good discussion going on BIKEGUIDE that lead to us talking about other parts that would be cool to look back on.
I kept thinking about all the changes we have seen and I think one of the easiest (well, they’re all pretty easy to see) things to see a huge change in are the seats and posts on our bikes. Not only because of the different technology, but also just how trends have affected the way BMX seats have been designed over the years.
Before I get into this, I want to say this is NOT supposed to be an exact history and more or less a nostalgic look at the past and how far we’ve come (or stepped back) over the past 10 years or so. Alright, let’s do this! 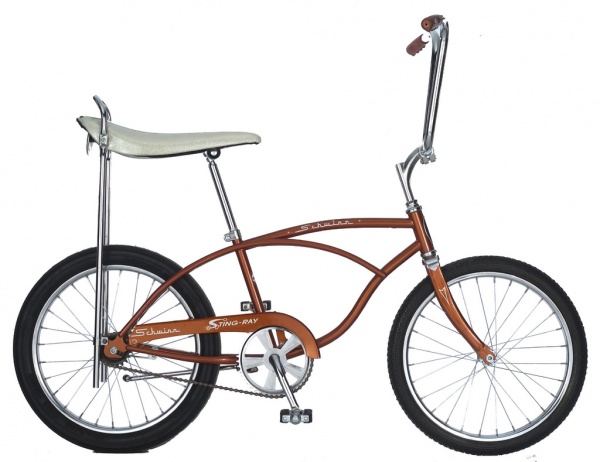 Going back, I wasn’t really sure how far to go because BMX has been around for a lot longer than I have been and it’s always hard trying to do something when there’s some pretty big block of time where I personally wasn’t riding BMX or even born. But I think everyone can agree this is a pretty safe starting point. The Schwinn Stingray and the classic banana seat. Designed to be long like motorcycle seats back in the day and badass as it gets! 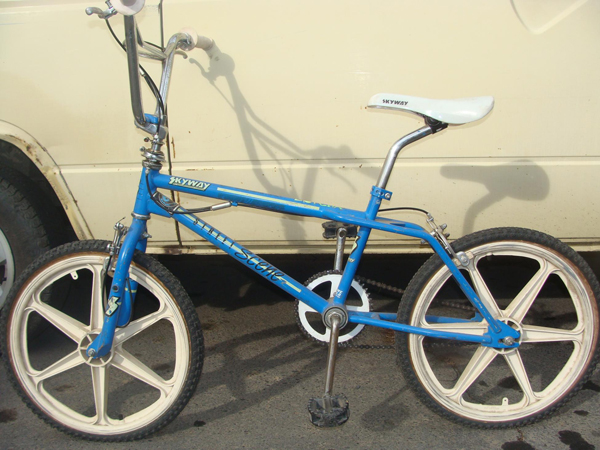 Skipping forward quite a bit, the banana seat slimmed down to the more traditional style of seat. Plastic seats back then were a pretty common thing and the overly padded seats we’ve seen in years past just weren’t much of a thing. Look at that laid back seat post too! Back when a seat tube angle didn’t really mean as much, haha.

Edit: Finally found a decent photo of the Hemorrhoid seat. 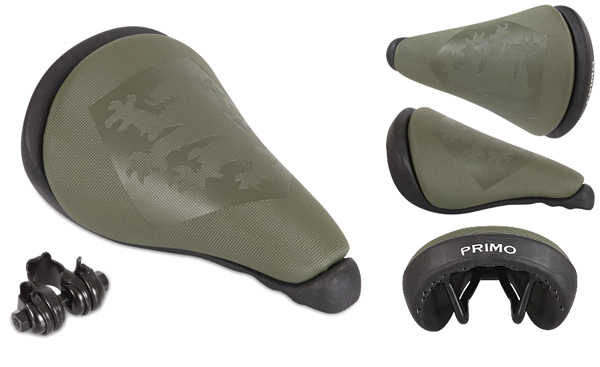 Alright, let’s jump forward to what was really the first thing that came to my mind when I started thinking about BMX seats. I’m sure a bunch of you are grinning right now thinking about the Primo Hemorrhoid seat. The green is a later version of the original they called the Pentagon, but just looking at it, it’s good reminder of the past. This seat features the oversized rails, plastic all around the edges to keep that wear and tear down and just enough padding to keep it comfortable! 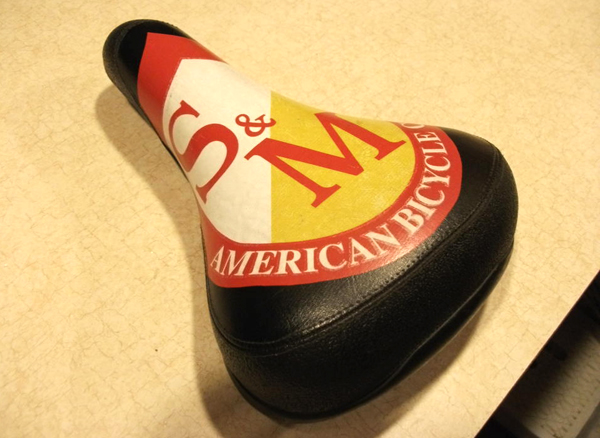 Another seat from my earlier days of BMX that instantly came to mind when I started searching Google for photos was the classic Shield seat from S&M Bikes. This seat is LOADED with padding and that logo up top to really set it off. Not only was this a super comfy seat, but it was a pretty brilliant marketing technique since there was no question as to who made it. I would love to know how many of these were sold worldwide. This is pretty much the polar opposite of the Hemorrhoid seat. 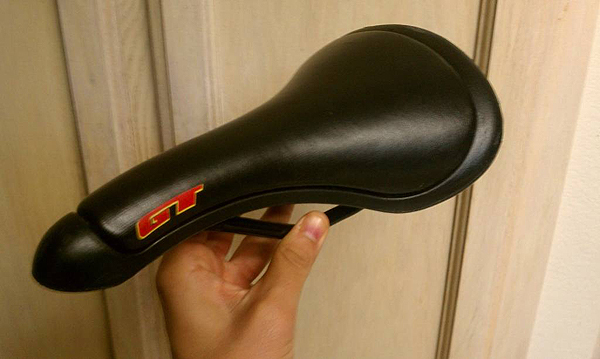 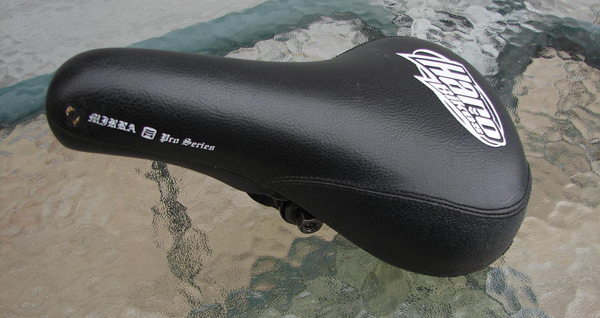 Edit: By popular demand, the Mirra seat from Haro! Plenty of padding and guarantees to make you ride like the Miracle Boy himself!
This seat also came in a few different colors. I wonder how many of these were sold during its prime!? 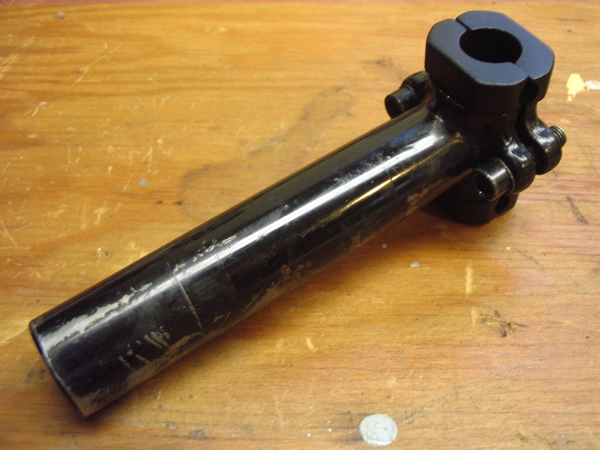 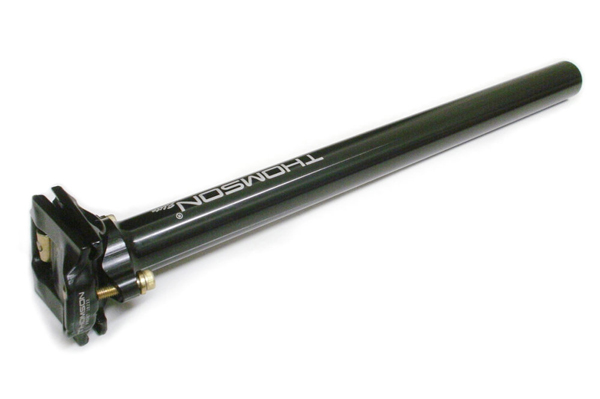 Railed seats worked with this style of post. Essentially you had the post and then 3 or 4 other pieces like the the top plate, spacer and bolt to tighten it all down together sandwiching the rails in the middle. Swapping out a seat was a pain in the ass back in the day and unless you had a pretty solid system of keeping everything together, it usually required 15 minutes and a lot of swearing to get a new seat on these things… Then you would get it tight and realize the angle was off, back the bolt out just far enough to screw it all up and then start over, haha. 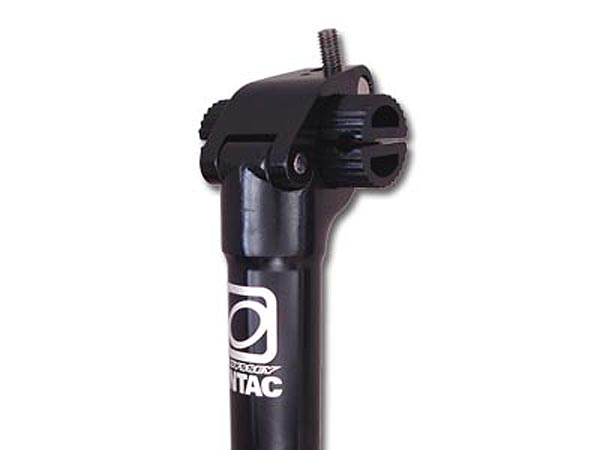 Edit: The Odyssey Intac post was really popular for a while as well with railed seats. Completely blanked on this when we did the original post. 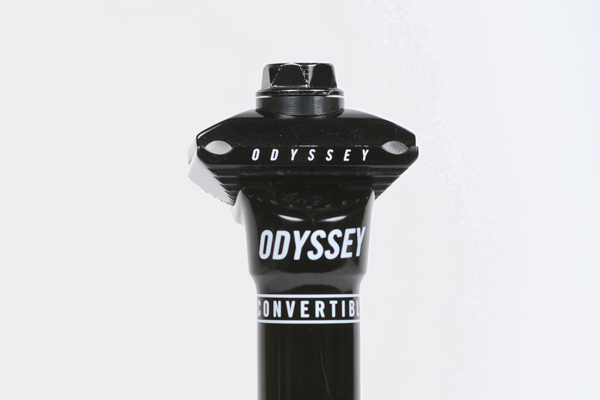 Odyssey’s Convertible post that works with railed seats or Pivotal seats is still an option today for the guys who prefer the classics. 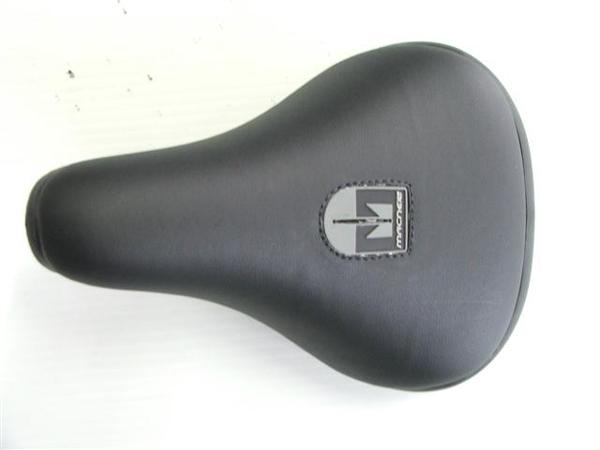 I can’t remember exactly how old I was when I learned what a Pivotal seat was… I want to say 16 or 17? 8 or so years ago now? I can tell you I was at Jellystone skatepark when a friend asked me to figure out how the seat was mounted on the post. After a few minutes of hot or cold, I gave up and had him show me. At that moment he jammed his finger into the top of his seat and said “There’s a bolt in here that goes through the seat and screws into the post!”… I couldn’t believe it.
The guys at Macneil introduced the OG Pivotal seat and shortly after they added new versions like the slim, Mid and Fat seats (Slim, Capital and the Far Capital — Thanks, Toby Gilkes) and licensed out the design to pretty much every single BMX brand in BMX that you can think of. This lead to A LOT of different versions of the seats that are still being produced today based around the Pivotal system. 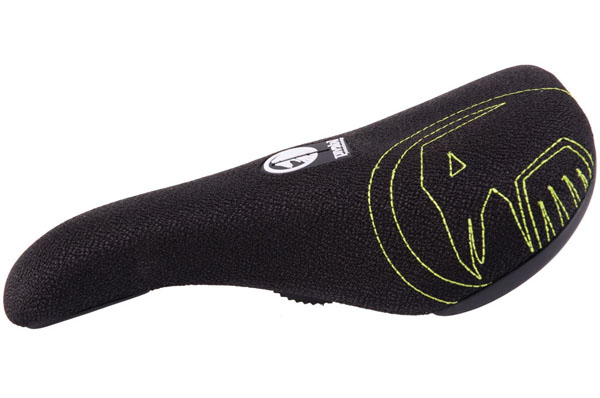 The Shadow Conspiracy Crow logo seat was a really popular version. I personally ran two of these when I first rode Pivotal for the first time. 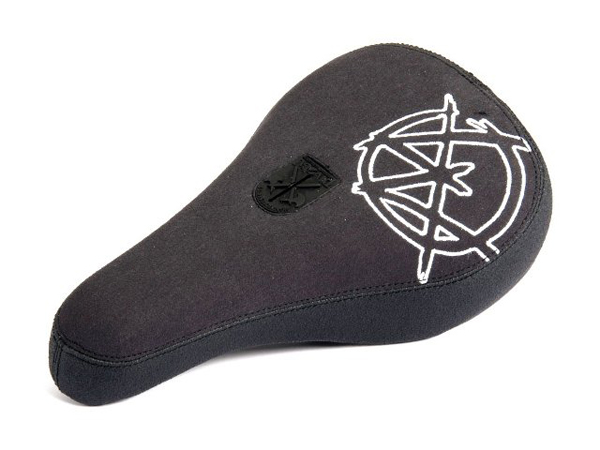 The Demolition X Markit seat has to be one of the top selling Pivotal (and Tripod seats) out there. I couldn’t even tell you how many people I’ve seen run this seat over the past 2 years. 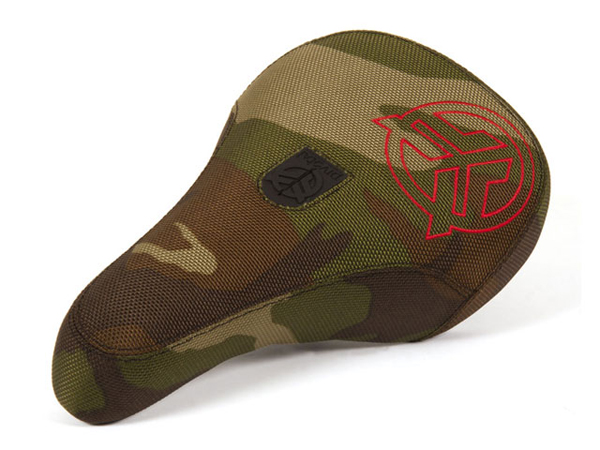 Federal’s use of the popular Camo colorway this past year on their version of the Mid Pivotal seat. 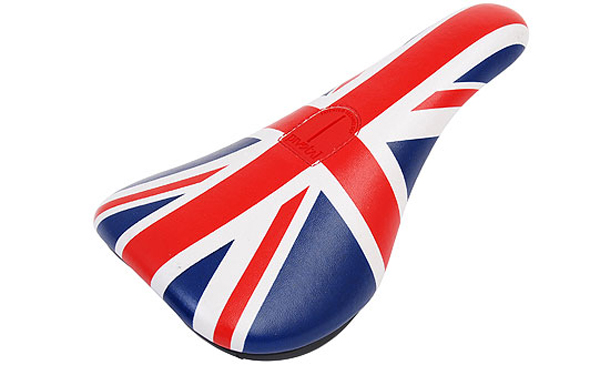 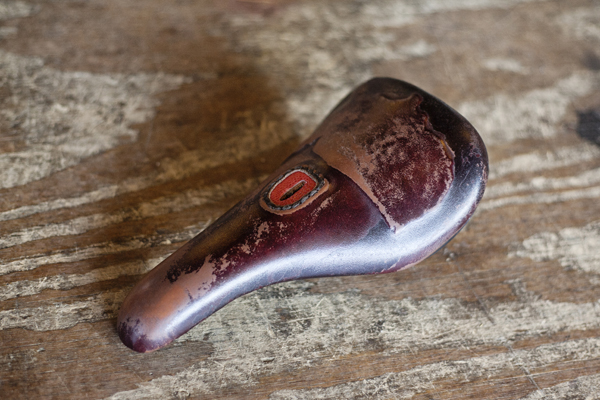 Native Bikes owner, James Covington, does custom leather seats and has produced some AMAZING seats in his time. This is just one example of a custom Pivotal seat he did. 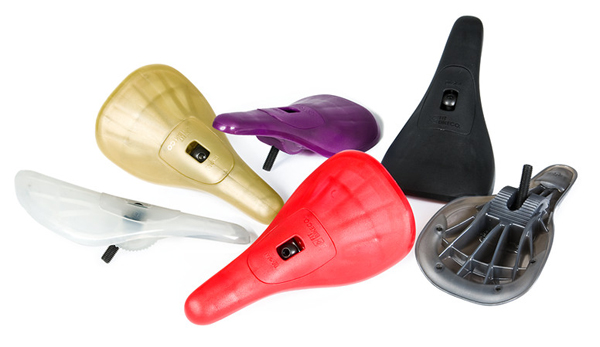 When I think about trends in the past that make me wonder what the hell people were thinking, I’d be willing to say this is one of the top ones that is right up there next to girl pants. Stripped seats made a VERY STRONG revival a few years ago with a huge number of brands catering to the demand of this trend with every color (solid and transparent) under the sun. Why? Weight savings and pretty colors, man! I’m glad this one faded off hard. 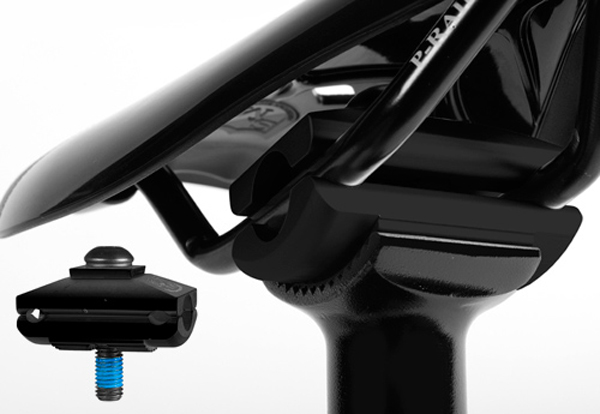 EDIT: Have a pivotal post but want a railed seat again? Look at this little guy that Mark Paul Abare Jr. hit us with on Facebook! 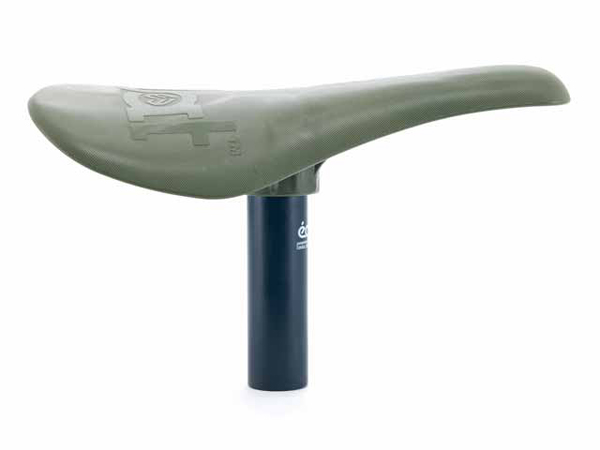 Some time around the time stripped seats became popular, brands were experimenting with lighter and more simplistic versions of the Pivotal system. The 1-piece seat and post combo (which is really 2 pieces glued together) surfaced and it got quite a bit of love from brands and still does. The downfall to these lightweight and simplistic seats? The angle cannot be adjusted to the riders personal preference. 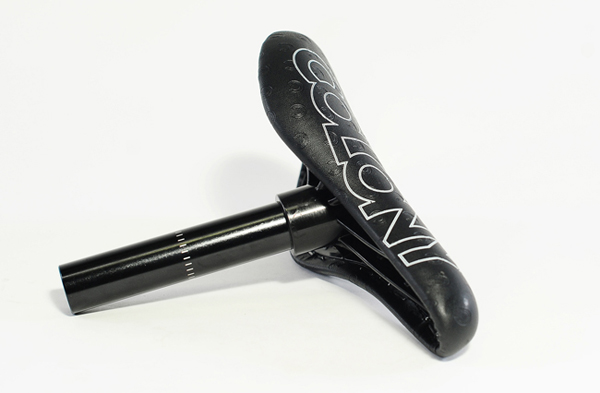 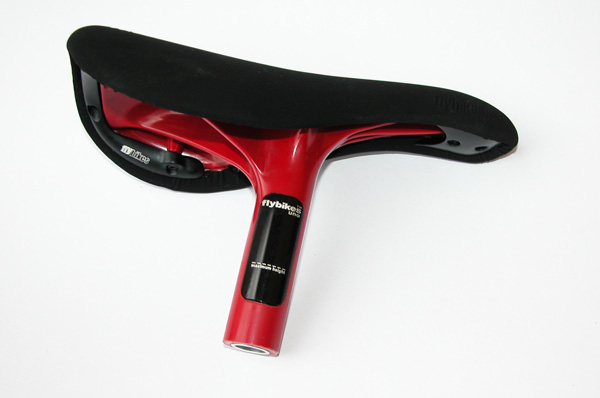 The true 1-piece seat and post combo came with Fly’s Uno seat. The pan and post were all one fiber/nylon piece with an internal aluminum tube in the post and plastic sides to keep to post from crushing and coming loose when tightened. I personally ran this seat for a good while and really liked this design actually. I’d imagine had the unchangeable seat angle not been an issue that this would have been a lot more popular than it was.

Overall, the one-piece seat and post combos were a pretty solid attempt at saving weight, a simplified look and a lower price tag.

Thanks to Google for reminding me of this. The sliding Pivotal design that I don’t recall Alienation ever releasing. This resolved the only issue of Pivotal seats which couldn’t be adjusted forward or backwards… But it’s pretty clear that the demand for something like this wasn’t as big of a concern to riders. 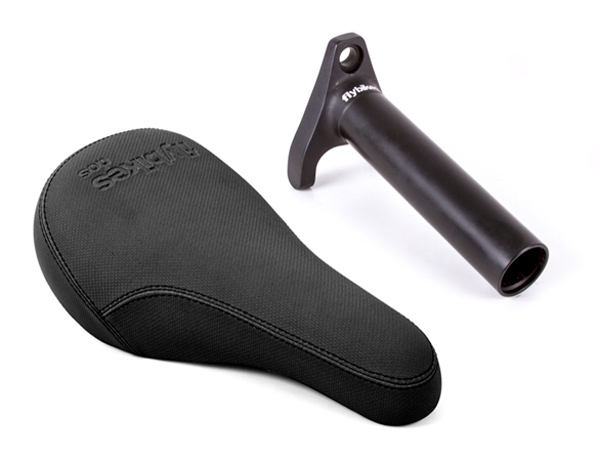 After quite a few years with Pivotal seats becoming the norm and pretty much no major attempts other than the one-piece seat and post combos to make BMX seats more simplistic, David at Fly Bikes unveiled the Tripod seat system at Interbike in 2012 and once again revolutionized how we looked at our seats.

If you remember an interview we did with David Quesada a while back ( Check it right here ) about the Tripod Seat System, we discussed what went into creating this seat design and the ultimate goal of it. Essentially this system has 3 points of contact on the seat from the post and one bolt to hold it all tight. This allowed the seat and post to have a cleaner look, made tightening and loosening the seat easier and it even was designed to have two adjustments for the two most common seat angles. I’ve also heard it comes with a lower licensing fee than Pivotal seats which is a big thing for brands looking to get the most out of their investment when developing a new product. Since 2012, we’ve seen the majority of brands give the Tripod seat system a go and it is quickly becoming the new norm for the style of seat being developed. 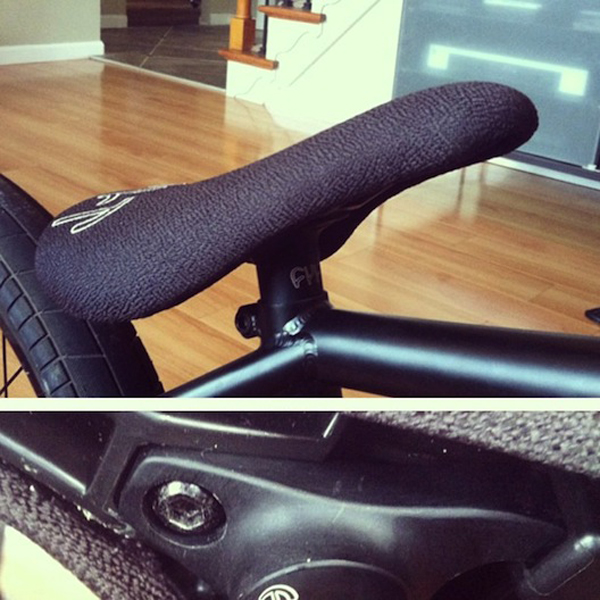 Chase DeHart’s signature seat from Cult is low profile as it gets. 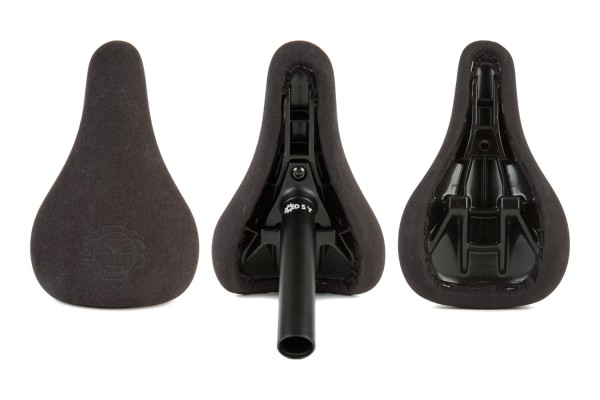 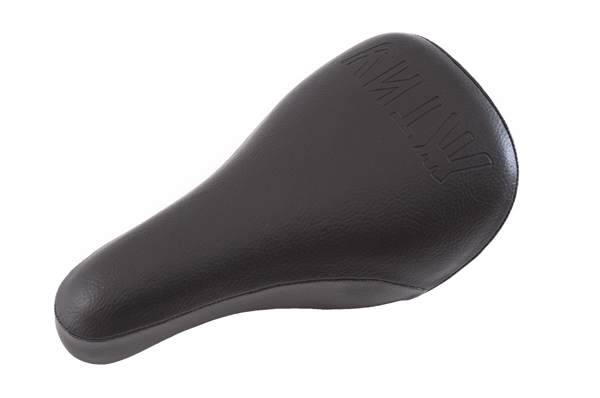 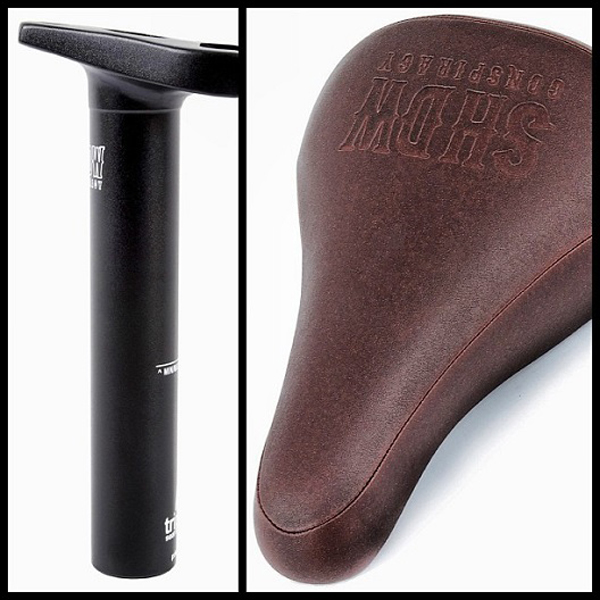 Brands like Mutiny, Odyssey and The Shadow Conspiracy use the Tripod Seat System. 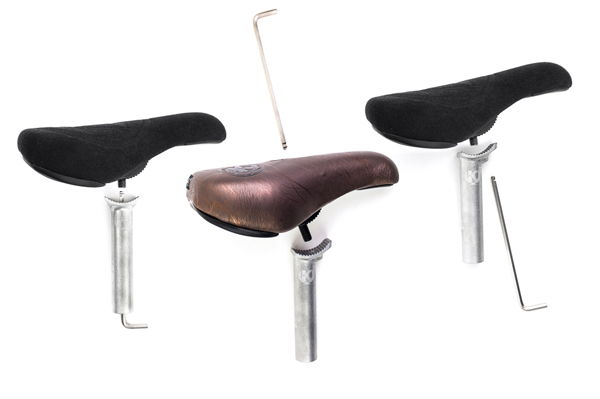 Since the Tripod Seat System was developed, the only other seat and post design that comes to mind is Kink’s Stealth seat system that they unveiled last year. This combines the Pivotal design and Tripod design with the notches and below the seat bolt for a clean look with multiple angle options. I could see this one catching on more in the future as well.

So that’s a little look at the different styles of seats and posts that we have seen over the years! I’m sure we missed something, so let us know in the comments! Which style of seat that was your favorite? Actually, what seat specifically is your favorite you ever ran? We want to hear from you!

You are here: Home / blog / Evolutions: BMX Seats and Posts