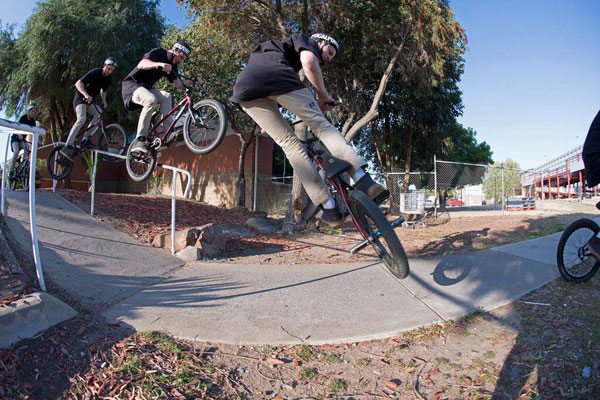 Over the years we have seen a lot of talent coming out of Australia and it seems like there’s always a new guy to keep on your radar. Over the past two or three years we have been taking notice of Colony‘s Jack Kelly who has been quickly becoming one of our favorite street riders from down under. The other week he had his latest Colony video drop online and it was banger after banger from the streets. We knew when we were watching it that it was beyond due time to get ahold of this guy to find out just what he’s all about! Let’s get to know Jack a little bit from his riding to work, motorcycles and more! 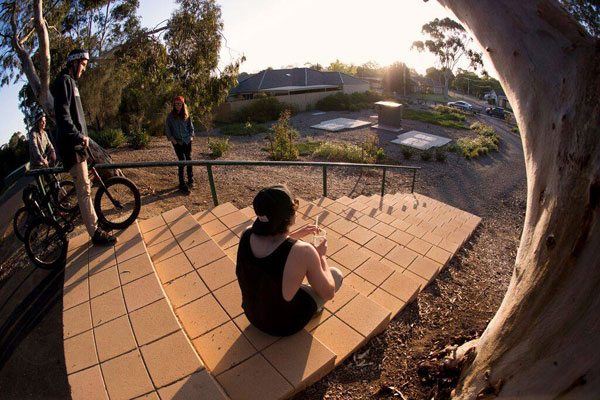 What was it that first got you into BMX? Any early memories come to mind?
I started riding my BMX bike to the BMX race track down the road from my house and gained an interest in racing but never did it. I lost intrest once I took my feet off for the first time over one of the jumps. It was all about freestyle from there on out!

Jack! What’s up, man? How are things going on your end?
I’m good, the weather isn’t so good, but we have a couple of indoor parks so im staying busy as well as working.

You have been doing it for Colony for a while now and in that time put out two banger videos for them. What do you have cooking with them these days? Any trips, signature parts or more videos in the works you can tell us about?
No trips planned or current video projects in the works right now as we just finished one, but I have a pair of signature Colony bars coming out in a few months that I’m stoked about!

You recently joined the Verve Footwear team, right? How did that opportunity all come about? Do you have anything in the works with them? I feel like there might be a banger of a welcome video in the works?
Mickey, the owner of Verve, hit me up and was interested in hooking me up and of course I was interested. I guess it ofically came about once we met at Canberra jam and hung out a bit and decided it was a good fit.

What about Focalpoint? Are you working with Cooper on any rad new projects for that?
Cooper, as many people might know, is always putting in work for FP, constantly printing shirts, hoodies ect in his garage. He’s the busiest dude I know. We’re always filming for mixtapes ect., so there is always something in the works. 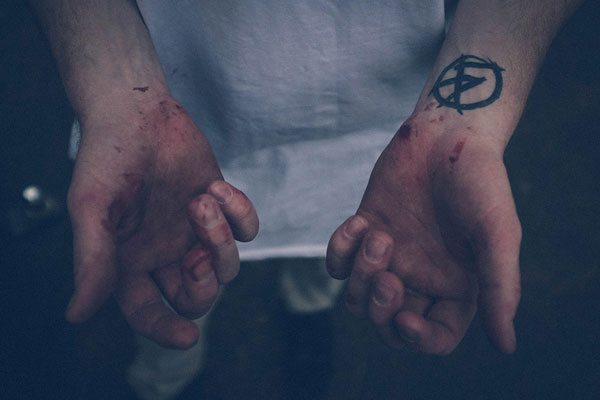 So, let’s go back to your video you just dropped for Colony a few weeks back that was an absolute banger. How long did you film for that video? Were there any crazy things that happened while working on that video that people might not know?
It took about 6 months I think. As for crazy stories, none really spring to mind. The best thing I can think of is the clip where I do ice to bar earlier in the video. On one of those attempts I looped out when I landed and sat on my leg and it hurt so bad. It went instantly numb and I was sure I had broken it, but after I sat down for like 10 minutes the feeling & movement came back and I ended up getting back on the bike and got it done !

Which clip took the longest for you to get done? Any guesses on the number of tries it took?
Probably that ice to bar clip that I just spoke about actually. It was messing with me because of where I kept landing. It is half on the road and half on top of the gutter. It was making me not commit to throwing the bars for fear of looping out and landing on the guter, which did end up happening anyway, haha.

We’ve seen that filming is a big motivation for you. What is it about filming that gets you so excited? Do you put a lot of pressure on your self to film or is it something that gives you a reason to really push yourself?
I love filming, the end result of an edit is like a reward for me. I like to be able to push myself and learn new tricks but also having something to show for it at the end of it all makes it even more worth it. The best part of it all is that I’m always with my friends and having a great time doing it. The stress of not being able to land something does get to me occasinally and I always get a feeling of guilt for making the filmer stand there until I land it. 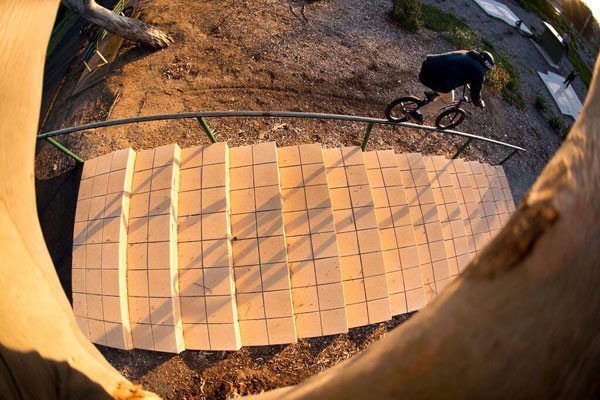 Yeah, that is always pretty stressful having people waiting on you. Let’s jump back a bit… Who were a few of the riders that really motivated you when you first started out riding?
When I started riding, I looked up to Ryan Guettler the most out of anyone, mainly because he was Australian and was always killing it in the videos i would watch.

That’s a good one to be inspired by, that’s for sure. What about these days? Who are some of the guys that get you psyched to go out and ride? Far too many to name and pleanty of obvious ones to mention, but dudes doing really tech and creative street shit gets me stoked. I see people do the craziest stuff and thats what motivates me most.

Have you had the chance to travel much thanks to BMX? Where are some of the places you have gone?
I haven’t traveled a whole lot, but I have been to California, China and a few different cities in Australia.

Where are a few of the places you have never been, but want to get to at some point in the near future?
Definitely Barcelona, more of the US and really any where in Europe.

Where have you been getting most of your sessions in these days? Any hot spots that you have been particularly psyched on?
Lately the weather has been so horrible that I’m usually stuck with the local indoor, which is below average but better than nothing. When it’s dry there is nothing I like riding more than a good flat rail. There are a couple of good local ones that I like to get a session on as much as possible

It seems like everyone has their “dream setup” that they hope to come across at one point and ride. Do you have one? What would it be?
Any flatrail is my dream setup, the longer the better really. If i see a spot I want to ride, I will instantly start coming up with ideas of things I want to do. I guess I dont have a “dream setup” really, but any spot is fun to ride is my dream setup. 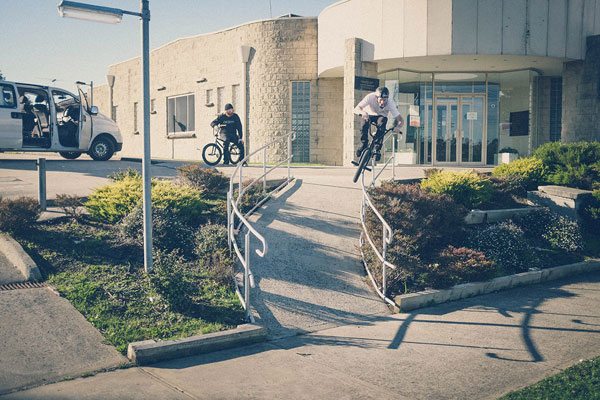 What would you say your favorite trick is?
Crank arm grinds. They are just so much fun.

What is one trick you cannot do for the life of you?
Crank flips! I’ve tried multiple times to learn them, but I just cannot figure them out.

What do you think you would be doing today if it wasn’t for BMX?
Probably skateboarding honestly. I still like having a skate on a nice mini ramp every now and again.

You’re working full-time while being a pro. What are you doing for work and how did you get into that?
I’m a plasterer/gyprocker. I needed a job and asked my neighbour for one and here I am 4 years later working for my neighbour. Living next door to your boss has its benefits, but it also has downfalls, haha.

Is that something you planned on doing or do you have a “dream job” so to speak other than BMX that you could see yourself doing some day?
It’s just a job to me, it makes me money so I can buy nice things and eat, but I wouldn’t call it an interest. Acting would be the dream job for me.

You have been posting up some progress photos on a motorcycle you’re working on. Care to talk a little bit about the bike and what you have been putting into it?
It’s a 1975 Yamaha XS650 that has been modernized and updated to a cafe racer style motorcycle. It’s a slow and expensive process, but I cannot wait to ride it when I’m done. It’s like a BMX, only faster, haha! 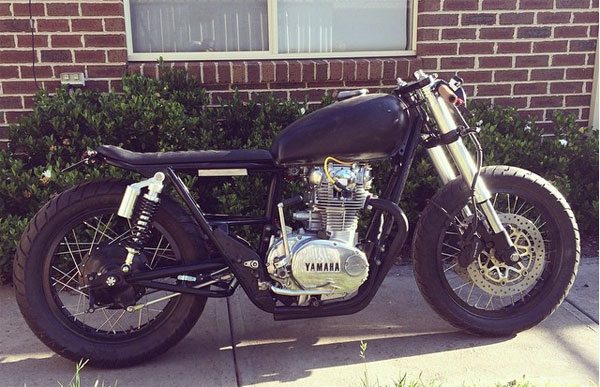 More photos of Jack’s motorcycle can be found @XS650b

How many motorcycles do you have or have you built in the past?
I only have one and this is my first one, so it’s all a learning process for me. I love learning new things especially when im interested in the subject.

Any ideas of what your next project will be?
Probably a car. It will most likley be an E30 or E28 BMW. Build myself a nice cruiser !

Is it hard to balance out riding, working, hobbies and having a life? Seems like you have a full plate.
Not really. It keeps me busy, but I always like having something to do. I work 7am to 3pm Monday to Friday and I fit all my hobbies in between. BMX always comes first though.

Where do you see yourself in five years?
Still riding, still working (hopefully a better job) and still having fun with it! 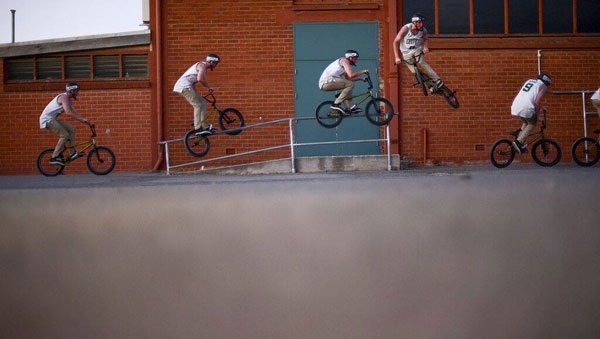 How can people keep up with you these days?
My Instagram & Snapchat is @KillJack. I have a Twitter, but don’t really use it so I wont bother mentioning it, but its not hard to find if you’re interested!

Do you have any shout outs or thanks?
Shout out to anyone that helps me out with BMX from the dudes who hook me up with product to the ones that share the good times with me!

Anything else you want to say?
I think I’ve covered everything.