A few weeks ago, Pumped BMX was finally released on a console version that works with X-Box One, Playstation, Wii and PC. After playing Pumped BMX and Pumped BMX 2 on iPhone, we were more than excited to give one of the most addicting video games we’ve played a go on a bigger screen. So, we got our hands on a copy of the X-Box One version and have been working our way through the challenges since. We figured since we have logged a few hours on it now, it would be a good time for a review. Let’s talk about it! 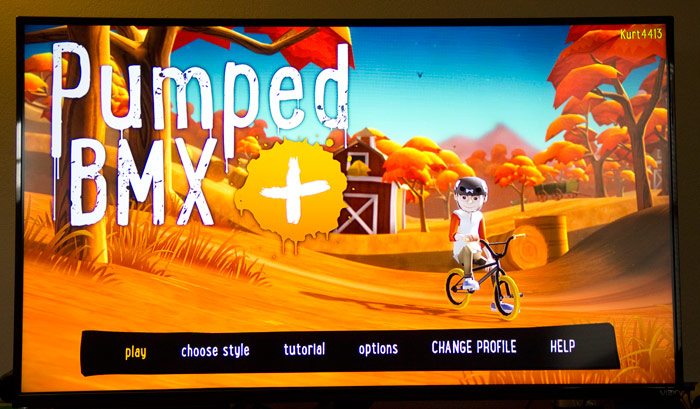 Going into the game, we have a pretty good idea of what to expect from it since we talked with Adam Hunt, the games creator, to find out a little bit more about what to expect about the console version prior to its launch. We have the video interview posted below if you missed that or would like to check it out again!

We knew from the start that essentially they took the existing game that is available on the Android store and iTunes, and made it, simply put, compatible with these different consoles. There were obviously a number of other changes that had to be made, or they were able to do since it was being made available for let’s say X-Box One, which is what we use.

So, actually looking at the game, one of the biggest things we noticed were that they have bumped the quality of the game up so that it looks really clean. Due to phones not being as powerful as an actual computer, they have to keep the quality lower to save on space and everything on your phone, but they were pretty much able to go all out as far as quality goes for this version.

Looking at the main screen after it loads, they have kept things real simple. You can play, customize your character, get tutorials, change a few options or switch your profile such as your X-Box gamer tag to another so you can save your progress to your own account.

There are 50 levels and 500 challenges ranging from easy to beyond stressful (you will understand when you’ve tried to pull a line or single trick 20+ times) and 16 different tricks that can be combined and mixed or connected in lines that make for a pretty lengthy list of possibilities.

We really like the quality of the levels and how the game is actually pretty realistic in comparison to other BMX games we have played in the past. If you over shoot a gap or case, you’re going to have a hell of a time getting over the next obstacle or finishing the level. The different levels make it so you pretty much have to take a few runs just to figure out the best way to get through it on top of what tricks you will actually be able to pull off if everything goes to plan.

The only downside is that sometimes you get pushing a lot of buttons and trick combos can become pretty unrealistic. But, for the most part if you’re aiming for a more realistic style of riding, it’s possible to do that too. We definitely get caught up just doing basic turndowns or 360 tailwhips over big sets just because how cool it looks from a more “real life” perspective versus 3 backflips and 2 tailwhips with a suicide no hander mixed in there somehow. 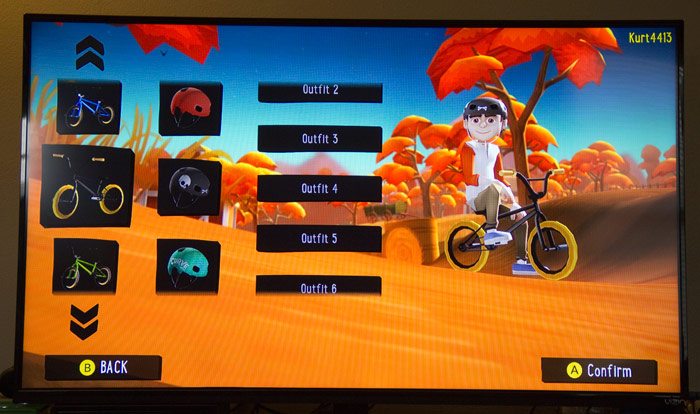 Like the other versions, you have the option of creating your own character with the helmet of choice, outfit and bike which is fun to play around with. It covers a lot of different “styles” when it comes to the way BMX riders actually dress and color combos which is cool. I think there are even a few more options than the previous games which is cool, too.

When we first got the game we figured it would be pretty easy to beat the game and we would make it through all the levels pretty quickly. We found out fast that it’s not going to be that easy to get through all 50 levels and 500 challenges because you can easily get caught up trying to pull a single trick and make it through the entire level successfully for quite a bit of time. You might even end up late for something or playing way longer than you planned to try and beat one single challenge, haha. There was one case where the progress wasn’t saved and we had to redo a few challenges. Not really sure what happened there since it’s supposed to be automatically saving your progress, but it wasn’t a big deal. Turns out once you have tried to do a challenge so many times, you can usually get it quicker the second time around.

Overall, Pumped BMX + turned out really good in our books. Is it the most realistic BMX video game ever? Nah, but if you were stoked on the original Pumped BMX’s, you already know that and don’t even care. It’s a fun way to pass some time and it does have some good, realistic aspects to it that keep it enjoyable. Do we recommend it? Yeah, if you’re looking for a new game to play or just want to pass some time playing BMX when you aren’t actually riding, this is definitely worth picking up. If you are super busy and don’t have a lot of free time, we wouldn’t advise picking this up because it will suck you in and take up more time than you initially anticipated.

Pumped BMX + is available for $9.99 now and can be downloaded directly from the X-Box, Playstation and Wii stores or from Steam now.

Have you played Pumped BMX + yet? Let us know what you think in the comments below!