It’s pretty wild how much changes and how much stays the same in the course of 30 years. Snakebite uploaded this BMX video from the first BMX street contest ever, the 2 Hip Meet The Street contest that went down way back in 1988! The bikes were a little different, the there were a lot of tricks being done we still see today and it looks like the overall vibe was awesome. Take a look into the past.

Random thought watching this… Imagine if Garrett Reynolds went back in time and hit up this contest, haha. People would probably have brain aneurysms trying to process what he does.

If there’s one thing I’m thankful for, it’s that Bruce Crisman is back. Here’s a quick teaser for his upcoming 2Hip edit that will be dropping soon. Cannot wait for this.

“Jake doin it up in Seattle, killin it, shreddin with Iron Scaggs.” – 2 Hip 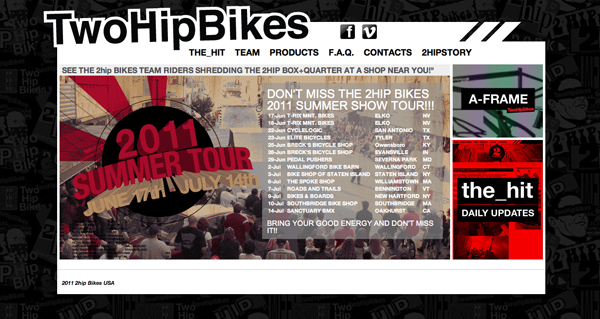 The 2 Hip website got a revamp. Check it out by hitting 2Hip.com and have a look around. Make sure you check the tour dates for their tour this summer, they might be coming your way.