This past weekend, The King of New York went down at the 5050 Skatepark. Above is a video that Jamaican John put together giving you a look at what went down. Looks like it had a real solid turn out and there was plenty of real good riding going down. Check it!

Back a few weeks ago on Halloween, 5050 Skatepark threw a jam to get everyone together for some good times. Our friend, Nick Jones, made his way to the park to film for the day. Check out this video he dropped giving you a look at what went down. It looks like good times were had for sure.

Since 5050 Skatepark opened up in July, it has been getting plenty of attention. Matt Brown recently caught up with the owner, Ed Pollio to find out what it took to make this place happen. This is awesome.

“Ed Pollio has long been a pillar of the Staten Island BMX scene. He has a certain ability to get people motivated and make things happen. He jokingly refers to himself as the BMX version of Tony Robbins. If you live in the NYC metropolitan area, you may have seen Ed once or twice on the local news lobbying at town hall meetings to have the Ben Soto memorial skate park rebuilt. After the city bulldozed the Ben Soto park last year, Ed and his girlfriend Angelica decided to open their own skatepark. 5050 has been up and running since July. Although it sustained some minor damage from flooding during Hurricane Sandy, the Staten Island scene came together and got the park running in only three days.” – Matt Brown / ESPN BMX 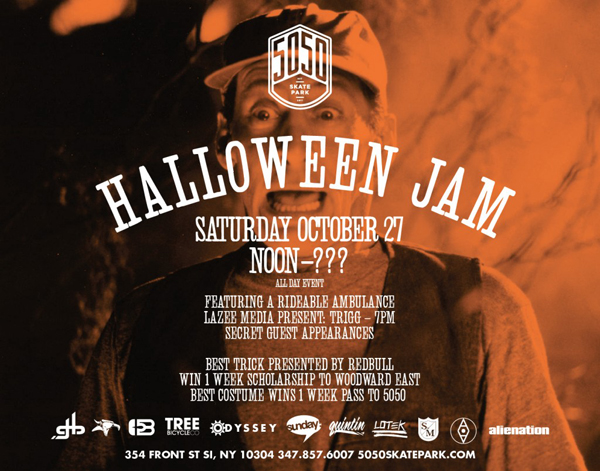 There’s a jam going down at the 5050 Skatepark tomorrow to celebrate Halloween. There’s bound to be good times so if you are in the area, make sure you get there!

The 5050 Skatepark has been popping up in a ton of edits since it opened up a little while back. Here’s another rad one fromPeep Game featuring Augie Simoncini, Anthony Watkinson, Colin Varanyak, Sean Ricany, Ed Pollio and Steve Croteau getting a proper session in. You know with a line up like that shit is about to go down. Take a peek.

The Group Home Bikes crew got a session in at the 5050 skatepark the other night. While they were there they did some filming for this edit. Check out riding from Nick Verdoni, Marc “Bupsy” Kachtan, Danny Duffy, Joe Irlinger, Paul Fiumano and Charlie Quigley. Real solid stuff. I haven’t heard this song in forever too.

Damn. This is sick! Check out the Base Brooklyn crew getting down at the 50/50 skatepark!

“Here is a quick edit of the Base Team at the 50/50 Skatepark. Alberto Ramos, Pablo Nunez, Ralphy Ramos, Jose Castillo. Edit by Glenn PP Milligan“

It looks like the new 5050 Skatepark has been getting broken in proper. Check out this edit for some real good riding at the new park.