The Friends section from “The Michigan Video II” now online…

Here’s another section from “The Michigan Video II” courtesy of Albe’s! This time around we get a mix of familiar faces and a few new ones getting down on street spots, ramps and more. This has a good mix of tricks, styles and spots, keeping things interesting from start to finish. There’s even a little bit of behind the scenes footage from that time Tyler Fernengel rode the Silverdome. Take a peek!

END_OF_DOCUMENT_TOKEN_TO_BE_REPLACED

Everyone knows that breakfast is the most important meal of the day. Start your day off right with this new mix from the Breakfast crew getting down on the streets of Michigan! This video is 8 minutes of street goodness along with some extras mixed throughout from some of the non-riding antics they were getting into while filming for this. Looks like they had a damn good time filming for this one.

“Breakfast is number one.

A collection of iPhone 6 videos over the past couple months that should have been Instagram clips.
we had more fun than you.
Michigan Street.

END_OF_DOCUMENT_TOKEN_TO_BE_REPLACED

HIGHLY advise you hit play on this video DIG BMX dropped from the crew out in Michigan! This is just under 15 minutes of pure goodness!

“Several months after the premiere of the first DVD project for Cory Wiergowski and I, The Michigan Video, I had the itch to film for another video, but one that was less forced, rushed, structured, what have you. I love watching crew videos, seeing relatively unknown riders doing their own thing, filming and having fun. I bought an HD Camcorder after selling my DSLR, and set out on the streets of Michigan and Ohio filming whoever was riding. 2013 for Michigan was focused on putting out a DVD and the stress was a lot to handle, so for 2014, I wanted to do a ton of web content. Connor Keating, Mikey Tyra, Cory Wiergowski, and Nick Bullen all had web videos come out early in 2015, with The Michtape being the final piece to drop from 2014. For all of the web content released this year, I used only Michigan-made music, and The Michtape is no exception. Here in Detroit, we had legendary DJ and Producer, J. Dilla making beats and collaborating with all of the best rappers from the early 1990’s to his death in 2006. As a fan of east coast hip hop from the Golden Era, finding a producer so close to home whose style was reminiscent of the greats like DJ Premier and Pete Rock was a blessing. With tons of complex layers and off the wall samples with a Detroit twist, Dilla’s music is both fun to listen to and easy to groove to. For The Michtape, I used only tracks produced by Dilla himself. The first beats are from unreleased tapes that circulate the underground from time to time. These cassettes are like gold to those who are fortunate to know of Dilla’s music. For the final two sections, I looked to Dilla’s collaborations. “A Day Wit’ Tha Homiez,” the first song, is Dilla’s first recorded track with verses by fellow Detroit Emcee, Phat Kat. This track was the only one released by the duo’s name, “1st Down.” Find the 12” vinyl and I’ll gladly fork over some cash for it! For Govan’s section, I looked to a recent, posthumous release from the studio album, “Rebirth of Detroit.” As a whole, The Michtape is a tribute to a Detroit artist who changed music and represented Detroit in a good light. So find some decent speakers, a screen that’s bigger than 4” wide, and enjoy Dilla with some of the best bike riders in Michigan doing their thing.” – Alex Burnside

END_OF_DOCUMENT_TOKEN_TO_BE_REPLACED

Oh hell yeah! Here’s one I know EVERYONE is going to be stoked on! The entire “The Michigan Video” is now online for your viewing pleasure! This banger of a video features some of Michigan’s finest and even pushed a few riders into pro careers! This is a MUST SEE.

DVD’s are available from themichiganvideo.com or albes.com worldwide
Thanks for the support! Enjoy!”

END_OF_DOCUMENT_TOKEN_TO_BE_REPLACED 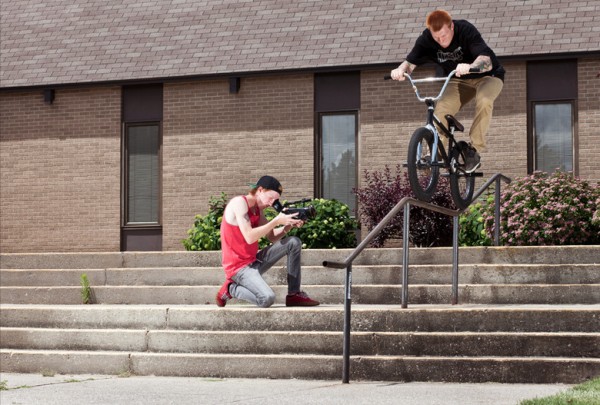 Get a little insight into one of the most praised scene videos in years, “The Michigan Video”. Alex Burnside is the main man behind the lens/computer, so he’s the man to give you the inside info on what went into the project.

The scene at TRP is so wild. There are sooo many talented riders that ride there on a daily basis. this video gives you a look at some of these locals and the riding they’re putting out. Awesome.

“Transitions Ramp Park in Dearborn Heights, Michigan has been a haven for BMX during the winter months, and this video is a testament to that. The locals have every line and every trick dialed and are constantly progressing at an astonishing rate. Check back in a year’s time for another one of these edits, and you’ll be amazed by how much the park will have changed and how much better EVERYONE is at riding their bikes. These are my closest friends, and awesome bike riders. Enjoy!” – Alex Burnside