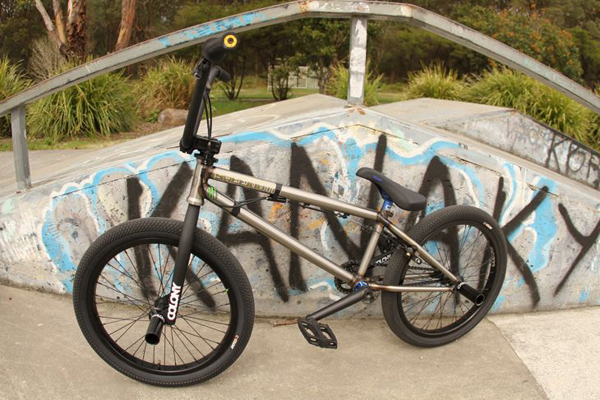 Alex Hiam has just built up one of his new 2012 signature frames, The Sweet Tooth v2. You can get a full parts list and more photos by hitting the Colony site. That thing is soooo clean.

Alex Hiam has been blowing my mind the past few years with how good he is. Everytime some fresh footage of him pops up, I get psyched. Check out 6 months worth of clips he has collected for this new edit for Colony. Soo good.

I’ve been waiting for this one from Colony…
“After working hard on filming for the Colony DVD we wanted to play around with a web edit series that was a bit more relaxed, so the deal is…. The rider picks out a spot or park they enjoy riding and then they film ten clips at that spot. No pressure, just keep it fun and do things they enjoy doing.

Next up in our Ten Clips series of video’s is Alex Hiam.

One of his favourite parks here in Brisbane is Fairfield, so we hit it up one weekday so it was a bit quieter, which it was but it was crazy windy at times. You can probably tell how windy it was in the background of some of the clips. Alex was keen though so we spent the afternoon filming this. Thanks to the locals for being patient at times.

Over the course of the last two years, the Colony team have been traveling the world filming. They kept it all pretty hush-hush until recently for the majority of BMX which is actually pretty hard these days. When it was announced they were dropping a full-length, people seemed to be pretty excited and with the team they have these days, it’s no wonder. Colony had Sidewall send me over an advanced copy of the video to check out along with FIVE copies to GIVEAWAY. All you have to do is “Like” The Union on Facebook and then comment or like the photo of the cover I’ll have posted on the wall and I’ll pick the winners next week. This is what I thought of the video…
END_OF_DOCUMENT_TOKEN_TO_BE_REPLACED 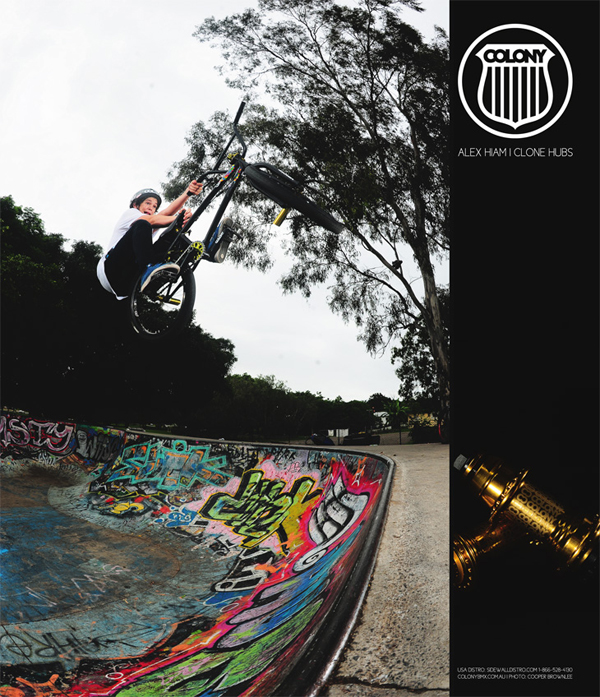 Colony dropped their new print ad featuring Alex Hiam and their Clone hubs. You can find this in the new issue of Ride BMX.

Alex is one of those unbelievably talented young riders that has been blowing up over the course of the last two or so years. Alex is constantly getting better, and after getting over a recent injury, he has been back on it and better than ever. I figured with him filming for his Colony part, having his own signature frame and complete bike, and just an endless amount of energy and good coming from the kid, that it was time to shoot him some questions. Check out what Alex had to say, some real good photos from Cooper Brownlee and some of his recent edits. Don’t forget to leave him some love in the comments or by Liking the interview!

The title has a lot to live up to for this new Crispy Stream edit. However, it did a pretty good job of being a really good edit with solid riding from Brock Olive, UK Steve, Alex Hiam, Nick Kajewski, Troy Charlesworth, Mike Vockenson, Mitchell McDonald, Mat Feldman, Wilton Hedley, Jack Elkins and Matt McCallum. Boom.