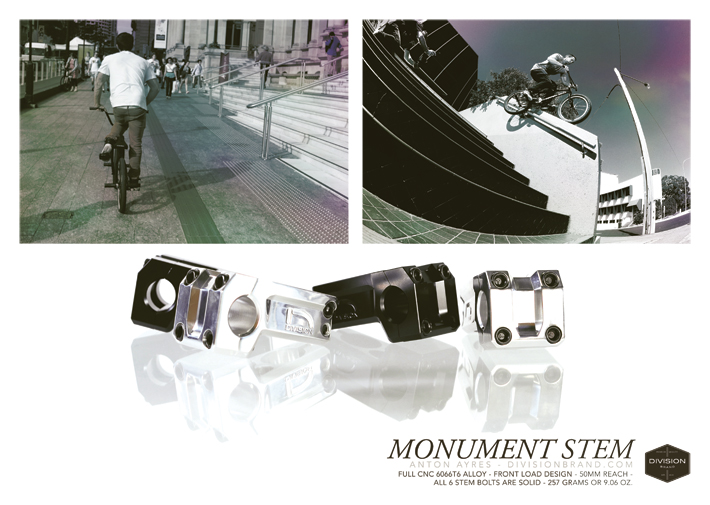 Here’s a look at Division Brand‘s latest print ad featuring Anton Ayres and their Momentum stem. This can be found in issue 32 of Focalpoint.

Now this is what I call awesome. Anton Ayres is the man behind The Grumet’s new “The Right Fluke” video and he still managed to film a serious BANGER of a part for it. There’s some serious grind technician skills going on in this, so hit that play button and enjoy!

“The 2nd worldwide mix from the team, as with the first mixtape we tried to involve as many of the team guys as possible from all over the world which resulted in a good mix of footage from Australia, America, Brazil, Poland, Canada, France and Russia.
Thanks to all the filmers that contributed to this.
Edited by Cooper Brownlee.”

Division Brand put out this new edit of Mitchell McDonald and Anton Ayres getting some time in on that crazy flat rail spot that has been popping up in a ton of edits lately. Both of these guys came up with some real good clips so check it!

“With the wet weather set in, Macca and Anton hit up a local flat bar spot a few times to come out with this web video.
Riders: Mitchell McDonald and Anton Ayres.
Filmed and edited by Cooper Brownlee.
Music: soundcloud.com/lucas-korek

These parts from the “Drain Kids” video have all been real good. They uploaded Anton Ayres’ section for you to enjoy this time around. Give it a watch. You won’t be disappointed!

Anton Ayres sent through his latest edit of him and Carriag Troy putting in work on a ton of real good street spots. Both of these guys know how to put their pegs to good use and they ended up putting together a bunch of clips for an awesome edit. Definitely check this out.

Jack Birtles dropped this trailer in my inbox this morning for his friend, Anton Ayres’s new DVD that’s dropping soon called “The Grumets The Right Fluke”. There’s some recognizable faces in this along with some damn good right and proper filming and editing so I can only imagine this video will be worth a look when it comes out.