Ben Wallace answers a few quick questions and throws down some fresh clips for you guys to enjoy. Check it!

“Ben Wallace rode his way to the states over the pond from the U.K., landed on a Mongoose a little over a year ago and couldn’t be happier. Watch Wallace riding the dirt trails at Woodward West in between answering a few questions. Find out Ben Wallace’s dream sponsor, favorite video game and his favorite sport plus more in between tricks in this My Five.” – Alli Sports

Cam White and Ben Wallace spend some time cruising Corey Nastazio’s backyard in this new video for Monster. As you can imagine they throw down and even get pretty close to taking each other out in the process! Check it!

“Cam White and Ben Wallace embark on a BMX Dirt journey to shred Nasty’s yard in Tehachapi, CA for an insane session in the wee hours of the morning. As luck would have it, the flag went flat on the second day of the shoot and it was game on for these two Monster BMX / Mongoose team mates.” – Justin Kosman

To get you stoked for the Dew Tour stop in San Francisco coming up here soon, Mongoose dropped this recap from the Ocean City stop a few weeks ago featuring Steve McCann, Ben Wallace and Cam White. Check it out!

Mongoose did an awesome job with this one. The riding was awesome and the filming and editing is dialed. This looks like it was a real good time too.

To say the Monster team took care of some business at the Dew Tour this past weekend would probably be an understatement. 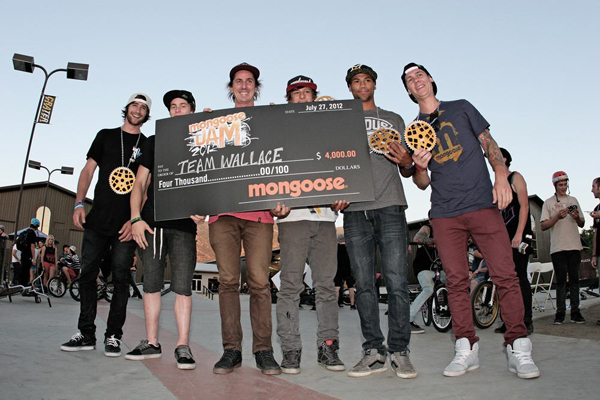 The Mongoose Jam wrapped up last night and it looks like Ben Wallace continues his winning streak for contests. Find out more below!

“Three days of BMX competition wrapped up today at Woodward West in Tehachapi, CA, as Team Wallace, lead by Mongoose rider Ben Wallace won the first-ever Mongoose Jam, with overall wins in Dirt and Park. The entire event was streamed live on Mongoose.com and is available on-demand on the website.
“I’m pretty stoked about the win. It’s the first contest Mongoose has done, and I ended up winning it,” said team captain Ben Wallace. “I’m super happy with the way all the guys rode. They’ve done us proud, taking the win for Team Wallace!”
Thursday’s Dirt contest gave each team an opportunity to get a jump-start in the standings, with Team Wallace taking an early lead. Kevin Peraza of Team Ryan, came out on top in the 10-man contest, with a stylish run that started with a one-footed invert on the first set, a knack knack on the second hit, a huge superman seat grab and a truck driver to downside whip on the final hit. Wallace and teammate TJ Ellis finished 7th and 2nd, respectively to take the overall team win.

Friday featured a doubleheader of competition, starting with the Park contest. Kyle Baldock riding for Team White took the top spot, tearing apart the Woodward West indoor park. His run started with a flair drop-in, and included a 900, a 720 over the spine, a flip whip and a 540 flair. Team Wallace’s Andy Buckworth took second and amateur rider Brad Thomas took fifth to give the team the overall win in the BMX Park competition.

The action closed out with the Street event featuring three different zones for the riders totackle. Jeremiah Smith of Team McCann took the top spot with Team McCann taking the overall win in Street, putting together clean, stylish lines in each of the three sections. Jeremiah’s ride during the jam included a double peg up the rail to a 180 downside tail whip in the third zone, along with an opposite double peg, hop over double peg ride on the a-frame rail, to manual to switch toothpick hangover ride.

The action began on Wednesday with the Amateur Audition, a jam format park contest open to all Woodward campers. Brad Thomas, Mike Mendoza, Todd Cagel, Shea Doran and Ed Percival had the skills to win a once-in-a-lifetime opportunity to compete against the pros and receive a yearlong flow sponsorship with Mongoose.

The BMX-only event featured competition among five teams, each headed by one of Mongoose’s pro riders – Greg Illingworth, Steve McCann, Paul Ryan Ben Wallace, and Cam White. The Mongoose team captains each chose a group of four pro BMX athletes, and drafted one amateur rider from the Woodward campers’ Amateur Audition to compete in Park, Dirt and Street contests.

For more information on Mongoose and their collection of BMX bikes, go to Mongoose.com. Keep up on the latest with the brand and its team riders at Facebook.com/MongooseBikes and @Mongoose on Twitter and Instagram.“

This appears to be the teaser for the new Mongoose team trip to France. Based on this, I can tell you the full video is going to be a must see for sure. When it’s dropping… I don’t know. I hope soon.