Brian Tunney has released his monthly edit filled with clips from the sessions he got in over the course of the past month! This is especially awesome because this video marks 3 YEARS of Brian releasing a new video every single month, which is so good. We are always stoked to check the videos out, and as always, Brian delivers with dialed flatland riding that he put together. Take a look! Hopefully he keeps this going for 2022!

“Full disclaimer: I didn’t leave the garage all month. I had grand plans to leave it but ended up with ten things that felt right, so here we are. Starting off, I finally figured out a double undertaker, then decided to front wheel it up with some older things I used to do to pass the time. Riding in a tight space adds another challenge that I didn’t expect, but in between getting tangled up on bikes hanging from the ceiling and a few tire bonks on the wall, I am happy to report that I finished three years of monthly videos at an advanced age….

Happy new year and thanks for watching!” – Brian Tunney

It’s a new month and like clockwork Brian Tunney has delivered once again with a fresh edit giving us a look at what he got into during his flatland sessions over the course of November! Although he was still fighting issues with his neck and back, it looks like he was still able to get some productive sessions in at his new place. Take a look!

“At the beginning of the month, I was still enduring some pretty serious side effects of the pinched nerve in my neck. I couldn’t really use my left arm and everything from sleeping to sitting at a desk caused me pain. But with help from the fine folks at Airrosti Physical Therapy, I was beginning to see a light at the end of the tunnel.
Then we finally moved into our new house, and the stress of that had me back in physical therapy. But as things were unpacked and we began to settle into a somewhat normal existence, I could feel things loosening up in my arm, neck and shoulder.
I’m still not better. There are residual flare ups and occasional spasms, but on November 14, I decided that enough was enough and I needed to ride. I started out very mellow and intend to keep it that way for at least another month, which is where the garage comes into play….
I have a garage spot now! And it’s great to have a riding spot at home, but it’s also kinda small and not a place where I can get into complex rolling moves. So for now, it’s gonna be my “safety spot” to mess around in.
As for this month’s riding, it’s nothing new or spectacular but it’s two weeks of me getting the feeling back after a month off the bike. I missed it very much.” – Brian Tunney

It’s a new month, and sure enough Brian Tunney keeps the streak of monthly videos going strong, even if it wasn’t super easy to make happen between a move and injuries. Here’s a short but sweet one giving us a look at what he threw down during his flatland sessions that weren’t pain free by any means!

“This past month, we moved back to Austin from L.A. But we are still in between houses, living in a temporary house and getting re-acclimated. That didn’t seem too bad until I pinched a nerve in my neck and then lost a bunch of days to seasonal allergies. In between the worst nerve pain I’ve ever experienced, I rode a bit. This ain’t much to write home about but at least it’s a call to action to go buy some Office of Future Plans songs here.” – Brian Tunney

New month, new Brian Tunney video! This past month was a busy one for Brian, but despite moving halfway across the country, he still managed to put together a video for you to check out! Hit play to see a bunch of fresh flatland clips between California and Texas, along with some bonus pupper clips!

“September was hectic. Actually, it still is. I got a new job in Austin, so halfway into the month, we moved from Lawndale back to Austin. And I started work two days after making the three-day drive. I know, complain much? (I swear I’m not.) It’s also prime allergy season, so even though the first half of the month was open for more riding, I was laid up with sinus pain, sneezing, etc. It was not fun. But, we’re back in Texas, I made it through the first work week and I managed to ride once since we’ve been here, in between moving out of Lawndale, driving to Austin, staying in one place for a week and then moving to another place today. Plus sinus pain, the desire to do more elbow glides and a nostalgic hankering to listen the Iceburn/Engine Kid split from Revelation Records en route to Texas.” – Brian Tunney 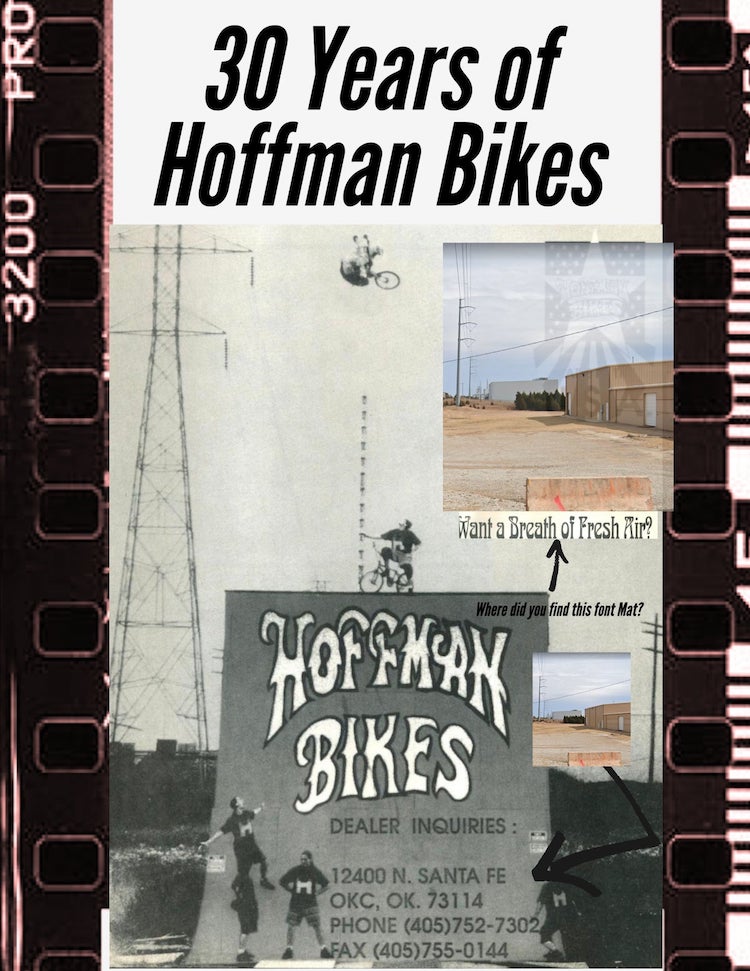 30 years ago Mat Hoffman launched Hoffman Bikes! Pretty wild! To celebrate, Brian Tunney put together a 28 page zine that you can pick up for $5 RIGHT HERE. If you’re a collector, this is definitely one you’ll want to pick up! Check out details below!

“30 Years of Hoffman Bikes is a 28-page look into the history of Hoffman Bikes, the team riders, the marketing and the technology that helped evolve BMX riding from 1991 to the present.

INTERNATIONAL INQUIRIES, ALL TWO OF YOU, PLEASE BE PATIENT AND I WILL UPDATE ORDERING INFO AS SOON AS POSSIBLE. RIGHT NOW, GOING TO THE POST OFFICE, DOING CUSTOMS DECLARATIONS AND BEING AROUND A LOT OF PEOPLE IS NOT SOMETHING I SHOULD BE DOING. Thanks for understanding.” – Brian Tunney

You can also pick this up in the DIG Webstore

New month, new video from Brian Tunney! It’s September 1st and he has a quick new edit giving us a look at some of the flatland sessions he got in over the course of the month. It looks like this time around he has been putting in a lot of work to dial in his Undertaker to Smith combos. That’s what’s fun about BMX… One day you can barely do a trick, then after a bunch of practice and work it becomes something normal and something you can do a lot more consistently. It looks like Brian figured this one out!

“Towards the end of July, I attempted to randomly do an undertaker to smith simply because I hadn’t done one since last December. It didn’t work out well, and after an hour of trying, I gave up. The following day, I landed two, and thus began my great struggle with undertakers to smith in August of 2021. This combination has been a struggle for me to learn, and eventually, last year, they started coming more regularly. But because I had such a tough time initially landing one, I always treated them as a one and done move. The past four weeks, I attempted to normalize them. And it wasn’t easy.

Each one of these clips represents close to an hour of riding and filming. And even though most of them are ten seconds or less, the headache of landing them was worth it.“

Brian Tunney keeping the monthly videos going strong! Despite being busy and unmotivated, he still managed to knock out a few proper sessions and film some solid flatland clips or your viewing pleasure! Check it out!

“For a variety of reasons, including work, travel and particulate matter in the skies over Los Angeles, I didn’t ride until July 20. All things considered, being old, washed up and unable to breath good during heavily air polluted days, I am not complaining. This is a loose collection of Dave Nourie and Ryan Nyquist inspired tricks that have no cohesive flow to them, but it’s also me dusting off three-weeks of downtime and not really sure of how to proceed. I won’t lie; last month’s no brakes undertaker was a really good breakthrough riding wise for me, but now I’ve kinda exhausted most of the options and don’t know where to go. The bike will take me where I need to go in due time, but the in between period of figuring that out isn’t always pretty. So here’s that minute and 30 seconds of wondering where to go next.” – Brian Tunney

It’s the first of the month, and like a rent check, Brian Tunney delivers with a fresh video for your viewing pleasure right on schedule. Check out a bunch of fresh clips he filmed during his flatland sessions over the course of June! Although Brian claims it’s “not awesome BMX” in the title, we think it’s pretty awesome. Take a look!

“Like most things I’ve learned in the past, I was trying something completely different and unknowingly stumbled onto something I wasn’t even thinking of. And that’s why I still love riding so much: the possibilities are endless.

This past month, I was wasting away the night devising techniques for a no brake lawnmower to dump truck because I really like the way stall-move tricks feel. And it worked out, but in the process, I basically did a no brake undertaker and a light bulb went off (or on) in my head. No, these don’t look as cool as the traditional undertaker with brakes, but the technique is new to me and it works in a variety of ways so I ran with it.

The song is from The World/Inferno Friendship Society’s last record, which is very underrated because it was released during the first week of the pandemic when we all thought the world was ending. Pete V., esteemed leader of World Inferno, passed away last month and so I’ve been celebrating a lot of his music the past month. Central Jersey has many unspoken heroes. But Pete’s artistic visions were ultimately too big for Middlesex County, and he transcended into something larger, undefinable and more mysterious. Luckily for us, Pete left that mystery behind.” – Brian Tunney