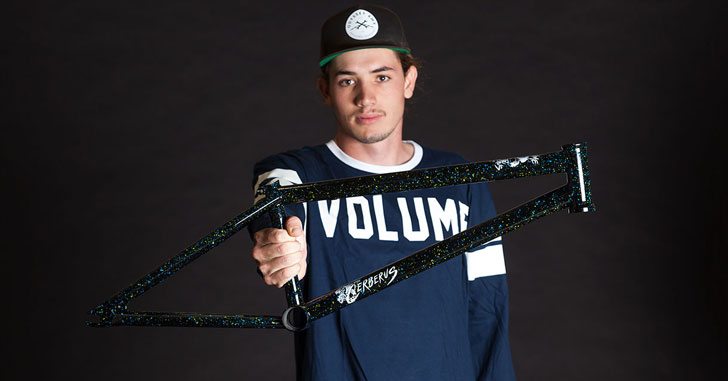 It looks like Volume Bikes have a new connect down south in Brazil through Dream BMX! Volume have added Caique Gomes to their line up. Caique has been popping up more and more lately and it’s easy to see just why he’s been on their radar. Check out some of his past videos right here. To kick things off, he’ll be rocking the Pool Shark Splatter Cerberus frame! Get a few words about the news below!

“Stoked to have Caique Gomes on as a distributor rider through Dream BMX in Brazil. Caique came to us from the kind words of Eric “Barney” Cuiper from Animal and things started to develop from there. He’s a badass rider and he absolutely kills at street. He’s already got a ton of things in the works for us, stay tuned. In the meantime, you can catch him shredding on his Instagram. Pictured below is of Caique and his new limited edition Jason Enns Cerberus frame.”

Here’s one we had sent in from Caique Gomes who had the chance to make a trip to California for the Full Factory Distribution warehouse jam! Caique and a few of his friends were waiting at the gate to get in and he went to work putting his pegs to good use on everything he coud during the jam. Check out some clips he stacked in this new BMX video!

END_OF_DOCUMENT_TOKEN_TO_BE_REPLACED

It’s crazy how there are some super talented riders out there that we just haven’t seen any footage of before. Dream BMX hit us with a link to to a BMX video welcoming their newest recruit, Caique Gomes, to their line up! We didn’t know what to expect going into this one, but we were definitely NOT disappoint. Caique has a deep bag of tricks. This has grinds, flips, barspin and tailwhip combos, plenty of nose balance and a bunch of other gold worth checking out, all from his local skatepark. Hit that play button and check out what this one has to offer!