Take a look at this documentary that Grit Visual put together from the Tanner Park trails in Salt Lake City, Utah! Definitely a really interesting story and it shows how much hard work has been put in, in the 15 years of its existence! Amazing.

“After creating a video earlier this year about Salt Lake City’s I-Street jumps (vimeo.com/70060502), Grit Visual producers Tim Jones and Jon Cracroft were eager to learn more about the area’s other main riding spot, Tanner Park. For years, Tanner Park has been a staple to Salt Lake City’s BMX scene. After some digging around, we were told to go down to The Wood Shop, a local BMX shop, and talk to the owner, Cam Wood. After meeting and talking with him and Greg Ingersoll, we discovered that they and a few other childhood friends were the main builders that put a relentless amount of work over the past 15 years, into creating the Tanner Park that exists today.
The goal of this story is to share the story of how Tanner became what it is now. We hope to provide some insight into how Tanner Park became the lush oasis of dirt jumps in the middle of Salt Lake City.
Music (Order of Appearance)
“Miami Skyline” by Tony Anderson
Licensed from The Music Bed
“Hidden Blues” by Pitx
Licensed from CCMixter
“Indian Summer (Feat. G. Jones)” by Minnesota
Licensed from Vital Management
Special Thanks:
The Woodshop BMX (instagram: @thewoodshopbmx)
Outlaw Union BMXS (instagram: @outlawunionbmxs website: outlawunion.com)
Jeremy Jones
Seth Huot
Adam Vankeuren
Kipp Schorr”

If you didn’t see the Nora Cup winning DVD “Killjoy”, you’re slipping! At least now you have a chance to make up for it now, as it’s online free for everyone to enjoy. With a line up like Elf, Cameron Wood, Dave Thompson, Rob Wise, Tate Roskelley, Matt Beringer, and Mike Aitken, what are you waiting for?

Oh hell yeah! S&M Bikes uploaded Cam Wood’s section from the “I Wanna Live” DVD for you to start your weekend off right! This is BMX! Hit that play button!

It’s been a minute since I’ve seen any Cameron Wood, and after this interview, I can understand why! I won’t spoil the video, but he has a lot going on. Besides what he’s been up to, Cam speaks on the Salt Lake City scene and the time 100 riders scared the city into letting them keep their trails. We also get some good trails footage to boot. 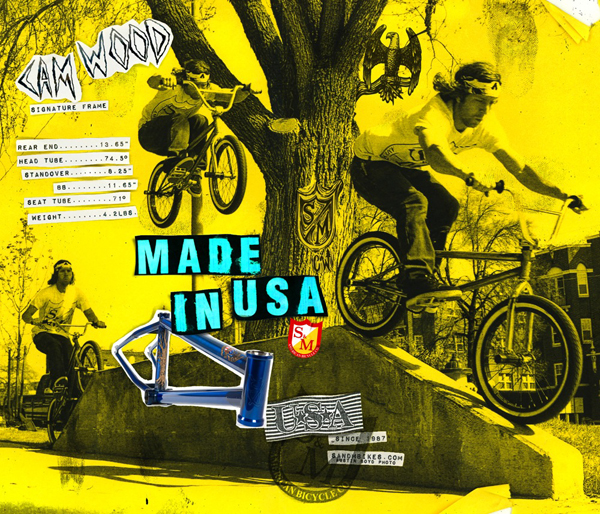 Here’s a look at S&M Bikes latest print ad featuring Cam Wood and his signature frame. This can be found in the new issue of Ride BMX.

The weather might have been a little cool, but that didn’t stop people from coming out to 5050 to help raise funds for Powerlite Mike who recently had some piling medical bills. Check out what went down during the day in this video. That mattress grind box looks fun as hell!

Shawn “Elf” Walters has been busy collecting clips from all of the different jams that Cam Wood has been throwing at his shop, The Wood Shop, lately. Elf compiled all of the best footage into one hell of an edit loaded with good times and good riding on some creative setups. With guys like Matt Beringer and Tate Roskelley going off to some Whitney Houston, you know it’s going to be good.

Leland Thurman uploaded another section from the Shitluck “Against All Odds” DVD. This section features Leland, Jesse Bower, Jeremy Fahey, Mike Florence, and Cameron Wood and is loaded with good riding and good times.